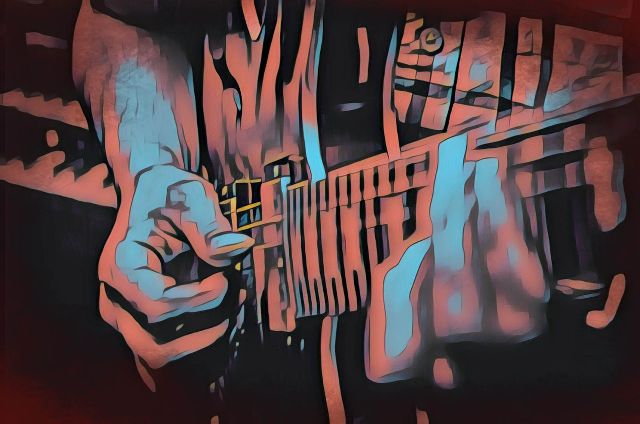 Blues music is one of the longest-lasting genres with its characteristically melancholic undertones and naturally soulful, raw sound. It's still well-loved and played today, but it might be challenging to decode if you're just learning about the genre.

Fortunately, we've put together the ultimate guide to blues chord progressions and music so that you can start enjoying blues from the comfort of your home studio. Below, we'll detail the history of blues music and share blue chord progression examples to help you get started.

The History of Blues

The history of blues isn't a pretty one. This genre originated in the American south by African Americans who newly acquired freedom after the abolishment of slavery. Traditional blues music was a single line repeated over four bars, which gave way to the basic structure of blues music today.

This genre takes inspiration from African American spirituals, work songs, and chants. The term "blues" referred to an expression of the time "blue devils" which described hallucinations brought on by the absence of alcohol. Simply "blues" was adapted to encapture the genre's characteristically sad and melancholic undertones.

Tragically, many considered "blues" devil's music. Certain parents felt that the rhythmic and honest nature of the genre could be a dangerous influence on children. However, this couldn't be further from the truth. We have a lot to owe blues and the blues progression. Without the blues scale and genre as a whole, we might not have ever experienced genres like rock, country, and Americana genres.

The Elements Of A Blues Song

So, what makes a blues song stand out amongst other music? Here are the key elements of any piece of blues music:

Blues music effortlessly walks the line between major and minor keys. This genre frequently styles chords to avoid using the defining 3rd of the key. For instance, in the key of G, a G chord would be stylized as G and D instead of a typical major or minor triad. This ambiguity of notes leaves the genre open to more possibilities, especially when going between different keys with the power of dominant 7th chords.

A basic blues track tends to include a walking bass line that's also seen in similar genres like jazz. The guitar chords follow the tone set by this bassline to create a groovy atmosphere.

Blues lyrics are trademarked by melancholy, honesty, and longing. You'll find that blues lyrics don't shy away from the truth and value capturing genuine emotion over getting the perfect vocal take.

Since this music is deeply rooted in African culture, it takes on a call-and-response pattern, sometimes described as AAB based on old African spirituals. This genre of music is meant to be a conversation around difficult topics concerning discrimination, hard times, and yearning for the past. The pattern is what gave way to the switch-up we hear every four bars in blues music.

Blues music often utilizes syncopation to add groove and style to its otherwise predictable chord structure. You might even hear the "choking" of guitar strings which is where a blues guitarist pulls back on guitar strings to create a unique sound:

Understandably, the most popular chord progression in blues is the "twelve bar blues" progression. This blues guitar progression has earned its name from using 3 chords alternating across 12 different measures, or bars of music. This can also be referred to as the AAB pattern.

Yes, a great jazz blues song can be played with just two chords! Hear it at work in blues songs like Chris Stapleton's Tennessee Whiskey. This example is a modern take on the classic blues style.

This chord progression introduces the 6th chord to the mix, making it more of a modern take on blues but it's still worth giving a try! You can also swap out your minor 6th for a power chord for a more of an ambiguous tone quality.

This classic chord progression is heard throughout many genres including rock and pop, but throw a blues scale over it and you'll have a major blues hit! You'll also notice that this is the turnaround sequence in the classic 12 bar blues progression showcased in songs like this example from Robert Johnson's Me and the Devil Blues:

Are you ready to start playing blues music? Check out these commonly asked questions and answers surrounding blues chord progressions:

What are the 3 chords used in the blues?

The 3 chords used in blues are the I, IV, and V or the tonic, subdominant, and dominant. These chords are played in a specific way which creates the famous 12 bar blues chord pattern.

What are the 12-bar blues chords?

12 bar blues chords refer to three chords, the I IV and V chords which make up the 12 bar blues progression. This common blues form creates the basis of most blues songs, though there's variations usually interspersed throughout, like 7th chords or extended style variations.

How do you make a blues progression?

To create a blues chord progression, you should start with the principle chords of I IV and V. These chords can then be used to create the classic twelve bar blues progression, or you can create more variation when playing the blues by adding variations to each measure and chord voicing.

What key are most blues songs in?

In blues songs, you'll most likely find the key of E or the key of A. These keys are likely the most popular since 3rd focused chord changes are the easiest to change. Blues is known for flowing freely from major to minor, so being able to easily slide between the two keys makes E and A fairly popular in this genre.

Blues music is well loved for good reason. Hopefully, this article makes it easier for you to play the blues and blues chord progressions from home. Enjoying exploring this well-loved genre!