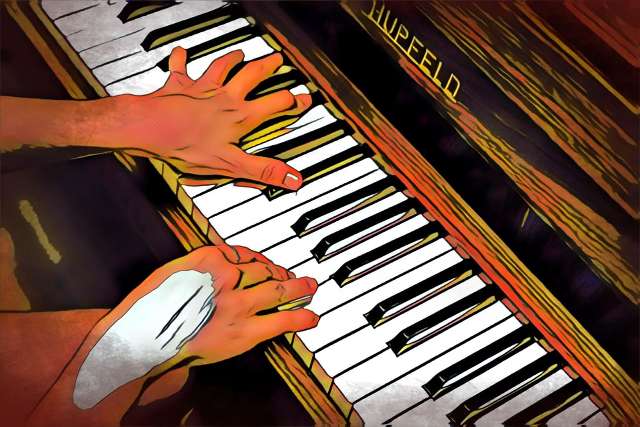 Chord progressions are the building blocks of songs. After all, a chord progression serves as a predictable pattern that stands as the foundation that allows other melodies, rhythms, and musical ideas to flourish. However, how does one come up with a chord progression? And what's the theory behind them?

Below, we'll detail everything you need to know about chord progressions and how to build them. We'll also share some tips for creating unique progressions so that your compositions can stand out from the crowd.

What Are Chords and Chord Progressions?

In their simplest form, chords are collections of notes that are sonically pleasing when played together. Chords progressions are patterns of chords that help evoke a certain feeling amongst the listener. There are a handful of common chord progressions you hear in a majority of today's modern music, but once you understand how chords are created, you can go far beyond the most popular chord progressions to expand your sonic vocabulary.

How Chords Are Created

In order to understand how a chord progression works, you have to break down what a chord is first. Essentially, a chord is a collection of pitches or notes. These pitches usually have a strong relationship with one another as established within a particular key.

A whole step consists of two semitones or two keys on the piano, while a half step is the distance of one key on the piano or one semitone. Within a scale, there are different types of notes referred to as scale degrees. The scale degrees and relationships between certain notes are consistent regardless of what scale you use. You'll find that the main difference between different scales is the starting note and what type of scale it is (major, minor, pentatonic, diminished, etc.).

For the sake of this example, let's look at the key of C major's scale degrees:

A major chord consists of the tonic, mediant, and dominant or the 1st, 3rd, and 5th scale degrees. Therefore, in the key of C major, a C Major chord is C-E-G. Chords that consist of three notes are referred to as triads. You can also have chords with additional notes.

For instance, a C Major 7th chord, or Cmaj7, consists of C-E-G-B. Notice how this chord is just like C Major, just with the added 7th scale degree or leading tone, which happens to be B. There are different formulas for various types of chords which we'll detail below.

In the graphic above, you can see how different scale degrees can be used to create different chords. Each type of chord has its own formula, so to speak, which we'll go over below.

A minor chord is another popular chord that's the root chord of a minor scale. Just like a major chord, a minor triad is made out of the first, third, and fifth scale degrees of the minor scale. Let's take the A minor scale for instance which consists of A, B, C, D, E, F, and G. Using the formula, we can deduce that an A minor chord is made up of A, C, and E.

Like other triads, diminished chords are based off of the first, third, and fifth scale degrees. To create a diminished chord, the tonic of a major scale is layered with a flattened third and flattened fifth of the scale. So, to form C diminished, the major chord C, E, G would change to C, E flat, and G flat.

If you want to add a little more depth to your chords, you can add the seventh degree to a chord. Seventh chords are formed by taking a triad and adding the leading tone. If we use a C major chord as an example, C, E, G transforms to CMaj7 with the notes C, E, G, B.

Inversions refer to chords that consists of the same notes as a typical chord, except the root note is not in the base of the note. Let's take C major for example -- C major is typically notated as C, E, and G with the tonic as the base. So, an inversion of the C major chord could be E G C or G C E.

These types of chords have a strong relationship to the tonic of a any scale. Tonic chords are the I, III, and VI chords within a scale.

The Different Types of Chord Progressions

There are several different types of chord progressions within the world of music.

5 Chord Progressions Every Musician Should Know

This chord progression is seen all throughout rock songs, though it still shows up in pop music today. Just listen to the progression in the hit song, "Despacito":

This is a popular chord progression that has dominated the charts. Take a look in how it's used in the classic "She Will Be Loved" by Maroon 5:

This is a classic four chord progression that is sure to please. Hear the chords played in the verse of The Beatles' "Let It Be" to get a taste of its sound:

This chord progression has been used for centuries. Check out its use in the classic song "Heart and Soul":

How To Write Your Own Chord Progression

Chord progressions work by working within a certain key. To start, decide what key and scale you want to use to create chords. There isn't one right way to interpret how a chord progression feels, but you can generally associate a happier, upbeat tone with a major key and a more somber feel with a minor key.

2. Build Off Your Starting Chord

3. Use A Progression Reference

There's nothing wrong with using a chord chart reference! This little cheat sheet will show you how to create a diatonic chord progression in all of the keys. You can start to combine different chord degrees together or use one of the common patterns discussed above.

Don't be afraid to spice up your chord progression by adding more notes. You can easily convert chords into 7th chords by adding an extra scale degree, or inserting notes in between chords to facilitate a smoother transition from one chord to the next.

When in doubt, try it out! There aren't any hard and fast rules when it comes to building a chord progression, so feel free to experiment. You might find yourself reverting back to some of the most popular chord progressions out there, and that's okay too. As the saying goes, "If it ain't broke, don't fix it"!

If you're in a pinch, or don't have your musical scales memorized, don't panic! You can use the 4/3 trick to help you determine any major chord. To do this, select a root note in a scale. In the key of C major, that's C. To find the other two notes in the chord, first go up four semitones. If you're starting on C, that will land you on E. From E, go up three more semitones to find the final note of the triad, G. You can also reverse the trick as 3/4 to determine minor chords using any scale.

If you're looking for a quick way to build different chord progressions, create a polychord. Polychords essentially combines two major or minor chords and create a single chord that's larger than the typical triad. For instance, you could easily combine the chords C Major (C, E, G) and G Major (G, B, D) to create CMaj9 which consists of C, E, G, B, D notes.

It's important for any musician to understand chord progressions whether you're a producer, songwriter, engineer, or somewhere in between. Hopefully, this guide makes it easier for you to build chord progressions confidently and decode any particular chord progression when you come across it. With just a little bit of music theory, you can decode just about any song.