10 Greatest Drum Breaks of All Time 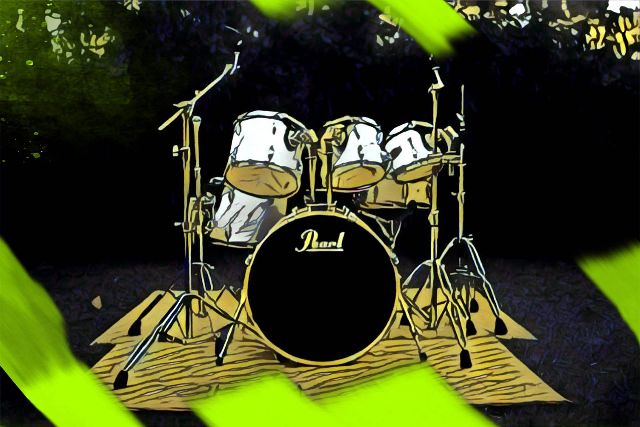 Nothing quite hits the soul like a great drum break.

When the rest of the band suddenly stops playing to let the drummer do their thing, you almost can't help but make a stank face.

Drum breaks feel so deeply integrated with our musical culture that it's almost difficult to imagine they started out as a simple way to introduce a piece of music.

Without drum breaks, however, we wouldn't have hip-hop or electronic music as we know it today.

Having a deep knowledge of drum breaks will give you an edge as a music producer, as you'll have a foundational understanding of what to look for, what works, and how to use them in your tracks.

Don't skip a beat. Let's dive in and explore all you need to know about drum breaks!

What are Drum Breaks?

Drum breaks, sometimes called break beats, are portions of a song where every instrument stops playing except for the drums. However, it's different from a drum solo, as the drummer will continue playing the main rhythm.

The idea behind a drum break is to create a dynamic moment while emphasizing the song's main rhythm.

Drum breaks came into fashion during the 1960s when Motown was at its peak. Listen to tracks from artists like James Brown and Al Green, and you'll hear them in action.

When the 90s rolled around and hip-hop began to unfold, hip-hop producers began sampling these drum breaks since they didn't have the ability to record live drums. The beauty of sampling was that it was very flexible. Producers could take a drum break and speed it up or slow it down depending on the feel they wanted.

When and How to Use Drum Breaks in Your Tracks

Drum breaks can be used in a myriad of ways. I often find myself using drum breaks as pure inspiration to build a track, adding my own drum samples and instruments around them before taking them out of the final production.

Of course, most producers are using drum breaks as major elements in their music.

The first thing you need to implement a drum break in your track is a sampler or DAW .

You can simply drag and drop or download your break into your sampler or DAW to get started.

One of the main things to know is the original tempo of your break. This way, you can line it up to the grid of your DAW. You can use a tempo-finding tool if the tempo isn't pre-labeled.

Once it's in your DAW, you can time-stretch it to fit the desired BPM of your project.

Using a DAW in a hardware sampler is a bit more involved, as the best approach is to load it into the sampler after it's been chopped up in your DAW. You'll then tune the pitch and length of each sample in your sampler so that they fit naturally with the number of sequenced steps and the tempo.

10 Best Drum Breaks of All Time

Funky Drummer might be one of the best drum breaks of all time. There's no doubt that Brown knew he had a solid drum pattern when he wrote this song, as the title was clearly inspired by the drums.

We can thank legendary drummer Bernard Purdie for providing the break on this track, as this drum break has been used in countless tracks by artists like Run-DMC, NWA, and LL Cool J. A few specific examples include "Mathematics" by Mos Def and "Let Me Ride" by Dr. Dre.

Of course, Public Enemy may have the biggest fans of this break, using it on a loop in "Fight the Power," "Bring The Noise," "Rebel Without a Pause," and "Calm Like a Bomb."

While the opening drum break has been a go-to in tracks throughout hip-hop history, the bongo break in the middle of the track takes the cake in terms of style.

However, beyond old-school hip-hop and new-school hip-hop makers who used this, such as Kanye West and Grandmaster Flash, you can find this break in many other genres. Check out "100 Miles and Running" by Logic or "Heliosphan" by Aphex Twin to hear this break in action.

Whenever you want to add a bit of funk to your track, "Apache" is a solid choice.

"Funky President" might be one of the most sampled tracks in James Brown's repertoire, not only with the drums but the vocals too.

The beginning of the track kicks off with a simple, tight fill between the rack tom and snare at the hands of session drummer Allan Schwarzberg. This little fill has been used in tracks like "Ghetto Thang" by De La Soul, "Eric B. Is President" by Eric B. feat. Rakim, and "Summertime" by DJ Jazzy Jeff and The Fresh Prince.

However, the kick-heavy beat has been used just as many times in tracks like "White Label Freestyle" by Nas and "Fuck Tha Police" by NWA. Ice Cube would even go on to use it many other times in his solo records.

Led Zeppelin - When the Levee Breaks

Nobody in rock n' roll made drumming history quite like John Bonham, and it's no wonder why he was so heavily sampled once the technology was made available.

There are several reasons why "When the Levee Breaks" was such a unique break. Not only was it recorded by one of the all-time greats, but it was also recorded at the bottom of a large stairwell at Headley Grange with microphones sitting on the floor above.

Andy Johns, Led Zeppelin's engineer, ran the roomy sound through a number of Binson Echorec delay units to add a bit of canyon-like slap to this already swamp-infested groove.

Bernard Purdie also found his way onto "Synthetic Substitution." While many people know him for his work on "Funky Drummer" and his undeniably groovy Purdie Shuffle, this bouncing 16th-note, kick-heavy beat became a classic 70s groove, finding its way into the hall of fame for samplers.

You can find cuts of "Synthetic Substitution" on tracks like "Ego Trippin" by Ultramagnetic MCs, "Ya Mama" by The Pharcyde, and "Miuzi Weighs a Ton" by Public Enemy. However, the biggest fans of this drum break might be Wu-Tang Clan, as they sample it on "Clan In Da Front" and "Bring Da Ruckus."

Ghostface Killah and Method Man even used it in their own solo music.

One of the reasons "The Big Beat" is one of the most popular drum breaks of all time is its simplicity. It isn't cluttered with hi-hats. All you get is a straight rhythm of bass drum hits and snare flams, making it a true staple for rock music.

This groove was recorded by Bobby Chouinard for Billy Squier's album, The Tale of the Tape .

Run-DMC would eventually use this break on "Here We Go." As the 2000s rolled around, the popularity of this break returned with its use on "Fix Up, Look Sharp," by Dizzee Rascal, "Girl on Fire" by Alicia Keys, and "99 Problems" by Jay-Z.

One of the standout things about this particular sample is its use of unique percussive elements. You'll find several pitched agogo bells pinging their way throughout the break, which ended up inspiring the Run-DMC track, "Peter Piper."

The original track was a Paul Simon song that was recorded back in 1973 on his album, There Goes Rhymin' Simon.

However, Bob James made a cover of it on his instrumental album Two , which came out in 1975. It is now one of the most widely recognized drum breaks of all time.

Skull Snaps - It's a New Day

The Skull Snaps changed its name from The Diplomats back in 1970 before releasing their self-titled album and falling off the face of the Earth for about 25 years. With the rounded kick drum, the cracky snare, and the punchy hi-hats, the break became a sampler's dream.

The beauty of this break is that it has all the right ingredients, including a bar of clean playing, a spacious kick drum pattern, and a couple of drum fills with slightly swung 16ths.

The track has been sampled hundreds of times in different kinds of songs, though it might be most popular for its use in "Poison" by The Prodigy, which was a great era for hip-hop-inspired electronic music.

The Honey Drippers - Impeach the President

The first bar of "Impeach the President" is one of the most widely-used drum beats in hip-hop. What's strange about this track is that not many people know who the musicians are that played on it.

Roy Charles Hammond enlisted a few students from Jamaica High School to play on this 1973 track, and to this day, the kid who played drums on it is unknown.

Of course, that didn't stop several artists from using it to create their own hits. You can hear this beat on multiple tracks from Notorious B.I.G's Ready to Die album, Eric B. and Rakim's "Eric B. Is President," and more.

I had to save the best for last.

When The Winstons recorded "Amen, Brother," a song that ended up becoming a B-Side for 1969's "Color Him Father," they likely had no idea that the six-second drum break in the middle of the song would have one of the most significant impacts on cultural hip-hop history.

This beat by Gregory Sylvester Coleman has been sampled on thousands of songs across multiple genres, ranging from groups like Slipknot to Oasis. It's somewhat of a staple for anyone who likes to sample.

While the "Amen Break," as it's called, certainly became a go-to choice for drum-and-bass makers, who sped it up to make hard-hitting, fast-paced beats, NWA decided to go another direction, slowing it down to make their iconic hit, "Straight Outta Compton."

It's impossible to mistake the distinctive snare snap and bouncing groove. To this day, it is the most sampled drum break of all time.

After listening to these drum breaks, I hope you have a better ear for the kinds of ingredients that make up a good drum break.

With so many famous tracks using iconic drum breaks, it's pretty easy to find information on any break with a bit of internet ingenuity.

Whether you're a seasoned producer or just getting your feet wet, I urge you to start seeking out new breaks to create staples for the next generation. If you play drums, make your own!