How To Write A Rock Song 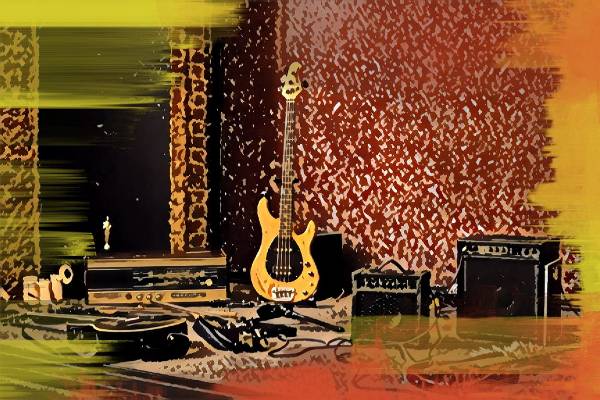 Are you ready to rock? Learning how to write a rock song isn't as challenging as it may seem. In this guide, we'll break down exactly how to write rock songs and explain the key points of the genre so that you can understand the rock music crafting process as a whole. Let's jump into it.

What Is Rock Music?

So, what exactly defines rock songs? Rock music, sometimes referred to as rock and roll, rock & roll, or rock ’n’ roll, is a specific subset of pop music that originated in the 1950s. Most rock musicians would agree that all rock songs share strong beats, but beyond that, it's challenging to define the genre, since there are so many varying subgenres that emerged from Rock music.

That being said, if you were to generalize the genre, rock-type music usually utilizes electric instruments like the electric piano, electric guitar, electric bass, and drums. There's a heavy emphasis on strong beats, and rock music often borrows from blues music form and style. You can also hear influence from folk and country music built into early rock.

When we think of the birth of rock and roll, you can't help but mention Chuck Berry. While predecessors laid the groundwork for this musician, Berry was the first to combine country guitar licks with a hard-hitting blues beat.

Rock music is also known for its raw lyrics, usually appealing to a younger generation. Themes of love, lust, rebellion or anti-authoritarian themes, and social politics all come out in rock music. When you write lyrics, you're sticking it to the man or letting your raw feelings out without hesitation. It tends to have an edgier sound than other pop music and prioritizes performance, showcasing epic instrumental solos.

Rock music is fairly fast compared to other genres of music. Most rock musicians perform in between 110 and 140 beats per minute or BPM. You might also come across certain scales used throughout rock music melodies. Some of these include but aren't limited to the Blues Scale, Minor Pentatonic Scale, Major Pentatonic Scale, Major Blues Scale, Natural Minor Scale, and Dorian Mode.

While it would be difficult to define all rock music, here are some of the more common subgenres you'll want to be aware of:

Rock is just as easily defined by its instruments as it is by its musical style. Again, there are exceptions since every rock song is different, but you'll probably become well acquainted with these instruments when writing rock songs.

Rock songs tend to opt for an electric guitar rather than an acoustic guitar, which helps distinguish the genre from other adjacent types of music like folk, blues, or country music. You can't learn how to write a rock song without the help of electric pedals as discussed below, which is another key point to the electric guitar's success.

If the electric guitarist isn't busy playing a melodic solo, he or she might be playing power chords. These chords are relatively easy to maneuver up and down the neck of the guitar and utilize a guitarist's third and fourth fingers along with an anchoring note.

Pedals aren't an instrument per se but they are an essential ingredient when it comes to learning how to write a rock song. Some of the most common types of pedals used in rock songs are compression, distortion, reverb, delay, fuzz, and overdrive pedals. Pedals are usually rigged up to an electric guitar but they can also be used on vocals and other instruments.

Another instrument group you might see in some genres of rock music is electric keyboards. Modern rock songs might have a designated keyboard, electric organ, or synthesizers.

While the process of writing songs in rock can vary greatly depending on the varied rock song subgenre, you can be sure that a good rock song has a strong beat. When you write a rock song, you'll most commonly see music in a common time or 4/4 time signature with a heavy emphasis on beats 2 and 4.

There are some exceptions with subgenres like prog rock and math rock, but generally, the rock songs are defined by their consistent rhythm. This makes the drums one of the most important parts of a rock song.

How To Write A Rock Song In 7 Steps

Sometimes, the most difficult part about building a rock song is getting started. There are multiple ways to go about doing this: You could start with the song lyrics, find your song's chord progression, or even opt to build off a beat.

Make a decision with what makes sense for you. The important part is to commit to your path. It's easy to talk yourself out of being productive during the early stages of a song. Let your initial idea roam free! It doesn't have to be fleshed out. It could simply be you recording a melody or a catchy hook idea into your voice memos app.

Write out your ideas and experiment with different combinations of lines and melodies. When writing a rock song, don't hold back! Let out your emotions in your sonic and lyrical brainstorm.

That being said, to make a rock song, you'll want to emphasize the musical elements that define the genre as discussed above. If you want to start simple, opt for a 4/4 time signature. Opt for a tempo that's higher than 110 bpm to create an energetic atmosphere the genre is known for. A song really only needs a vocalist, guitar, bass, and drums to feel complete. With some rock genres like alternative rock, the simpler the better.

Now that you have some basic ideas behind your rock song, it's time to start molding the clay a bit more and give the song some structure. Rock songs don't have to be confined to a rigid formula, but having a basic sensibility of where different elements lie can be extremely helpful.

Once you've selected your structure, try to fit your initial brainstorming ideas within your structure of choice. Move your sections around and adjust what you've created until you feel like your second verse flows freely into your second chorus and so on and so forth.

If you haven't started already, it's time to build out raw, daring lyrics to your melody of choice. Lyric writing for rock music often revolves around a certain lifestyle; love, lust, and rebellion. Try to build your song lyrics around one of these concepts and build a good hook that encapsulates the main message of your song.

Once you've written your first draft of your song, it's time to record! Record yourself or your band into a digital audio workstation or DAW. One of the best parts about rock music is that recording quality isn't as precious as it might be in a polished pop song. For instance, the subgenre "garage rock" was born purely out of the sound of bands recording music out of their garage. Rock and roll is all about being raw, real, and emphasizing artifacts.

6. Listen Back and Revise

Once you have a recording of your song, it's time to listen back and see what you can improve. Is your band gelling together? Are your lyrics too vague to understand? Try to source as much feedback as you can from other musicians to go back and improve your work.

Writing a rock song is one thing, learning how to play with a band live is another. One of the reasons why rock music is so special is that its often associated with different subcultures that come with their own styles, messages, and aesthetics. Rock and roll wouldn't be what it is today without its heavy emphasis on stage presence.

Get the band together and play live! Sometimes, performing can help reveal both weak and strong points in your song, making it easier for you to improve as a songwriter. If you don't have a band, you can start to network with other musicians via open mics or social media or simply play out with a backing track. The important part is that you're setting aside time to build your performance skills, which is essential to virtually any rock artist.

Hopefully, you'll find that writing a rock song isn't as challenging as it may seem. With a little practice, you'll be able to improve your writing skills in no time at all. Happy songwriting!