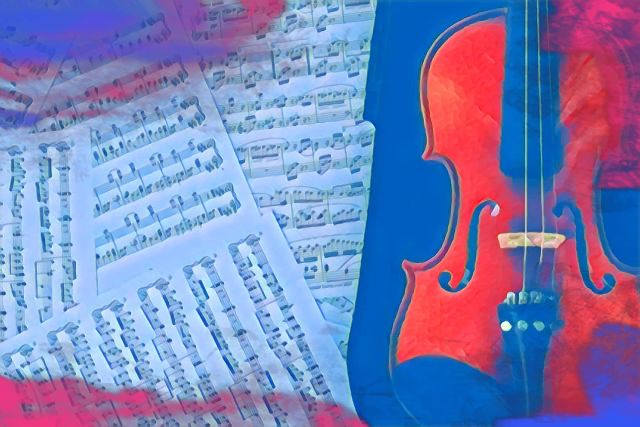 When learning how to play modes, one of the first modes you'll learn (likely without even knowing you've just learned a mode) is the Ionian mode . This mode is the first mode many learn, as it represents the foundations of Western music.

Of course, modes can also seem very complicated, which is why many instrumentalists tend to stray away from them for as long as they possibly can. In this guide, we're going to look at what the Ionian mode is and how you can use it in your music!

A music mode is a scale that is built off of the major scale. Every mode starts on a different note of the major scale, though uses the same degrees in the scale, which is what gives each mode its unique tone.

What Is Ionian Mode?

Ready for the big a-ha moment?

The Ionian mode and the major scale are the exact same thing!

Many people think of the Ionian mode as having a bright, happy, or triumphant characteristic for the same reason they think that of the major scale. The beauty of learning the Ionian mode is that it is a foundation on which you can learn the rest of the modes.

All scales and modes are built using formulas, which make them easier to learn and differentiate.

Here is what the formula for the Ionian mode looks like:

You can also think of this mode in terms of degrees of the major scale. Those degrees or intervals are:

If you take this simple numeric formula and compare it to the major scale, you'll see that they are the exact same thing. Let's take a look at the C Major scale, for example.

The notes in the C major scale are:

The notes in C Ionian mode are:

Of course, to truly get a grasp on the Ionian mode, you must first have a deep understanding of the major scale.

What Is The Major Scale?

The major scale is the foundation of western music. This scale consists of seven notes arranged in a series of whole and half steps.

People will also often refer to the major scale as the diatonic scale .

You can look at the chart of major scales below to see how the major scale is arranged in each key.

Play these on the keyboard and you'll notice they each follow the step formula above.

Finding The Notes In Ionian Mode

Now that you have a better understanding of the major scale finding the notes in the Ionian mode should be an absolute breeze, as they follow the same formula.

However, it's still important that you understand how to approach these notes from a modal standpoint.

When looking for the notes in a mode, you will want to use one of three techniques.

Luckily, the notes of the Ionian mode are the easiest to find compared to any other mode, as they are the same as the notes in the major scale.

Technique 1 - Use The Mode Formula

If you're struggling to figure out a mode, you can simply use the mode formula.

The mode formula for Ionian mode is:

Start by picking a root note to build your mode atop. For this example, we'll start with the note C.

The notes of the major scale, as we learned above, are:

Because the Ionian mode is the first mode in the major scale, the notes in C Ionian will be the same as they are in the C major scale:

If you're ever jamming with your buddies and someone tells you to solo in Ionian mode, all you have to do is find the major scale .

Now, I understand the above two techniques might seem a bit repetitive, though this is only because the Ionian mode is the same thing as the major scale, making it very easy to determine and play in an instant. However, when you start moving on to other modes, you'll realize how useful these techniques are.

We talked a bit about intervals above in our step formula conversation, though we want to get a bit deeper into this, as it's a helpful way for many to build modes.

Intervals are simply the distance in pitch between two notes .

The interval formula of C Ionian mode, for example, is:

Of course, this also goes for every other Ionian mode, including G Ionian, E Ionian, and so on.

Let's look at the steps you would take to put this formula to use:

Memorizing this formula will make it very easy to find the notes in all seven modes without ever having to look up any scales. While this particular technique might seem like a lot of work at first, it's a great way for instrumentalists to memorize the notes on their instruments, whether you play the piano, guitar, etc.

How To Use The Ionian Mode

One of the best ways to use the Ionian mode is by simply playing atop a major chord to get a feel for how certain notes sound.

So, for example, let's say you wanted to loop a C major chord.

You could then play atop that chord using the notes in C Ionian.

If you're already used to playing the major scale, then playing the Ionian mode might not feel like anything special. However, if you spend time listening critically to what you are playing, you will have a better reference when you start moving to other modes.

For example, when you play Phrygian mode or Mixolydian mode, your ears will be so used to hearing Ionian mode that you'll immediately notice something unique happening.

You can also use the Ionian mode to play over songs that use the major scale.

When playing modes, it's important to pay attention to the characteristics or flavors of a particular mode to see what differentiates it from the others. I often like to begin by looking at tritone and half-step intervals of the mode I'm playing to get a better idea of its quality.

The modes of the major scale have a single tritone interval (B to F) and two half-step intervals (E to F and B to C).

Now, providing you with Ionian characteristics is quite tough, considering the fact that Ionian is pretty much the foundation of Western music theory, and each note functions with as much importance as the next, though I'll do my best.

One thing to note about the Ionian mode is that many consider the perfect fourth a note that you'll want to "avoid" when using functional harmony. This is because a perfect fourth interval, when paired with a major third, creates a flat ninth interval. It can often sound strange or dissonant when played atop a major chord.

The other note or interval you'll want to look out for is the major seventh, which is the last half-step in Ionian. In C Ionian, the seventh is B, which is one half-step away from C.

Of course, people play these two notes in Ionian all the time. For example, adding a fourth to a major chord creates a sus4 chord, which can help you lead to the tonic with a bit of hangtime.

As for the seventh, musicians will often add sevenths to their major chords to give them a bit more flavor.

While many people will refer to these notes as "avoid" notes when talking about music theory, I would argue that these are the main characteristics of the Ionian mode, even if they make things sound a bit dissonant at times.

Songs That Use Ionian Mode

Some of the most popular songs that use the major scale are those that we learn when we are very young. Many nursery rhymes, such as "Row, Row, Row Your Boat" and "Mary Had a Little Lamb," all use Ionian mode.

Moving into the more contemporary world of music, one of the best examples of the Ionian mode is from The Beatles, "Let It Be."

This song is in C Ionian and uses arguably one of the most popular chord progressions in pop music: I V vi IV.

There are so many songs that use the Ionian mode that it'd be impossible to list them all. I guarantee you could go to your song library and shuffle to a random song, and the likelihood that you landed on a song that uses Ionian mode would be higher than any other mode.

Is Ionian Mode the Same As Major?

Yes, the Ionian mode is the same thing as the major scale, which is often why it is one of the first modes people learn about in music theory.

How Many Modes Are There In Music?

There are seven modes in Western music, including:

Final Thoughts - Why The Ionian Mode Is So Important

As you can see, the Ionian mode might just be the most important mode in Western music theory. Without it, we wouldn't have a foundation for all of the music we make today.

The Ionian mode is crucial for many reasons:

I hope that I was able to dispel any mystery surrounding this mode. Chances are, you've already been using it for as long as you've been making music. However, with your newfound knowledge, you'll be able to better contextualize the music you make and hear to make it more meaningful.