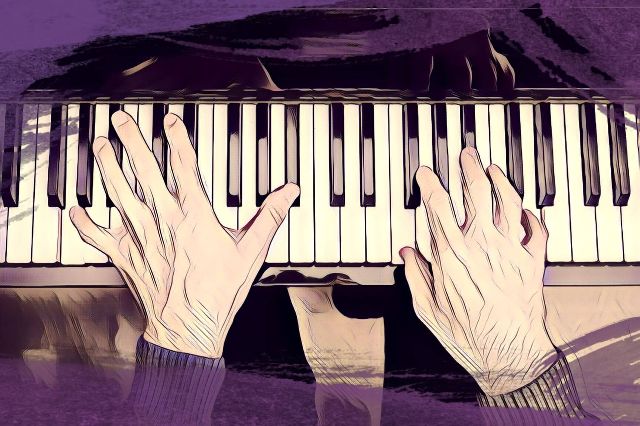 Major vs. Minor: What's The Difference?

To understand why major chord progressions are so popular, it's important to first take a look at the fundamental differences between major and minor keys. Major and minor chords are built from families of notes, otherwise known as keys, which are organized by a certain scale or pattern that defines the key.

Music theory aside, these patterns evoke different emotions in listeners. Generally speaking, a major key is going to sound happier than a minor key, because there's less dissonance, or tension created using the formula for a major key.

You likely understand these relationships intuitively. For instance, check out this video that takes classic uplifting songs like Don't Stop Believing and Walking on Sunshine and converts the songs from a major key to a minor key:

Why do the songs sound so different? The main difference between the major scale and minor scale can be traced back to the third note of the scales. In a minor chord, the third of the scale is flattened whereas, in a major chord, that note is natural or unaltered. Such a small change can make a huge impact on any piece of music.

Therefore, great songwriting starts by picking out chord progressions that align with the vision and emotion of your subject. The key of G major and G minor have vastly different emotional implications, so it's imperative that you opt for the chord progression that speaks to your musical vision.

So, what is a chord and how do you build one? A chord is a collection of three or more notes played simultaneously that create some sort of harmony with one another. These three notes are built from a certain scale and hence named after that scale. For instance, if we wanted to build a C major chord, we would have to look to the key of C major, which is C D E F G A B.

Major chords are built upon the first, third, and fifth notes of the scale. Therefore, playing a C major chord would result in playing C E G at the same time. Chords are the same from one instrument to the next though they may be notated differently based on your home instrument.

What Makes A Chord Progression?

As discussed, a chord is simply a collection of notes. A chord progression is a group of chords, most commonly in groups of threes or fours, that creates a certain feeling based on the context of the chords. Chords from any given progression are typically created using the same or similar scale, but changing the order changes the feeling of a chord progression.

For instance, a I V vi IV progression will feel completely different from a vi IV I V progression even though they are utilizing the same chords. Chord progressions evoke different emotions using the following sonic devices:

Identifying your key will give you a good sense of how a chord progression is going to feel. As showcased, chords built from a major scale will tend to have a happier tone than those built off of a minor scale.

The order of chords changes the feeling of progression because it allows notes to resolve or hold tension based on their placement. You'll commonly see progressions end on IV and V chords since these chords create a feeling of resolution contrasted against the I or tonic chord.

Chord progressions use the opposite of resolution, tension, to create anticipation and urgency. Certain chords have less tension between one another as compared to others. This is why you'll commonly see specific chord combinations show up time and time again.

Most often, you'll see I IV V chords within a progression since these have the least tension and the most harmony. The I chord is otherwise known as the tonic, while the V chord and IV chord are known as the dominant and subdominant, respectively.

How Do I Read Chord Progressions?

Chords can be written out as notes on sheet music like anything else. Using sheet music to decode chords can be helpful to understand the relationships between notes, but you probably won't see them expressed in this manner often otherwise.

Guitarists will commonly encounter fretboard diagrams or tabs to express chords. This notation is easy to understand since it's laid out exactly like the instrument, though this notation is pretty much limited to those who play the guitar for obvious reasons.

The system of Nashville Numbers takes the idea of Roman Numerals and simplifies it. Instead of writing out a common chord progression like V VI IV, you would see 5 6 4. Numbers are written out in bar-length segments to make it easy for instrumentalists to pick up and play anywhere in the piece.

Roman numerals are the most universal way to write out chord progressions. Chords are built around a scale from numbers 1 to 7, representing the number of notes in a scale. The number assigned to a chord relates to its position within that scale. For instance, in the key of F major, the I chord would be F major the ii chord would be a G minor chord.

What Is A Major Chord Progression?

Every key has a I ii iii iv v vi VII structure in a major key. The relation between notes and their Roman numerals is a constant.

How To Build A Chord Progression In 3 Steps

1. Start With a Scale

To start, you'll want to pick out a scale that aligns with the type of chord progression you're building. In this case, we'll be using a major scale. If we use the key of G major, for example, the scale can be written out as G A B C D E F#.

Now that you have your scale, it's time to write out your chords for each scale degree in G major. To build your chords, you take the root note and add a third and fifth from the key of G stacked on top of that note. For instance, G major is spelled out as G B D which is the I chord.

The ii chords would be A C E (using the notes provided in the key of G major), creating A minor. Altogether, the chords of the key of G major would be as follows: G major, A minor, B minor, C major, D major, E minor, and F# diminished.

You can also look up a chord chart for the key you're working with, like the one shown for the guitar in the key of G.

The challenging part is past. Now, you can utilize your chords from the G major scale to create different chord progressions by mixing and matching three or four chords. If you don't know where to start, work with the I IV V chords since these chords have a strong sonic relationship. Simply mixing and matching the order of these chords can create countless popular chord progressions you've heard in some of your favorite songs.

This classic progression is used in many songs, old and new. You can hear it in tracks like Brenda Lee's Always On My Mind and Twenty One Pilot's Ride :

While this progression starts with a minor chord, it's still considered a major chord progression since it's pulling a chord from a major scale. You can hear the sound of this unique progression in Jazzier songs like Satin Doll by Duke Ellington:

This major chord progression is a classic in modern pop music from the past several decades. Hear this killer chord combo in The Beatles' I'm Down :

This is a tried and true progression you can find just about anywhere you listen to music. You can hear this progression in classics like Ritchie Valens' La Bamba and Kenny Rogers' The Gambler:

The I V vi IV progression may be less common than powerhouse combinations of I IV V or VI I V, but it's still heard all across pop music. You can hear this progression in I'm Yours by Jason Mraz and With or Without You by U2: