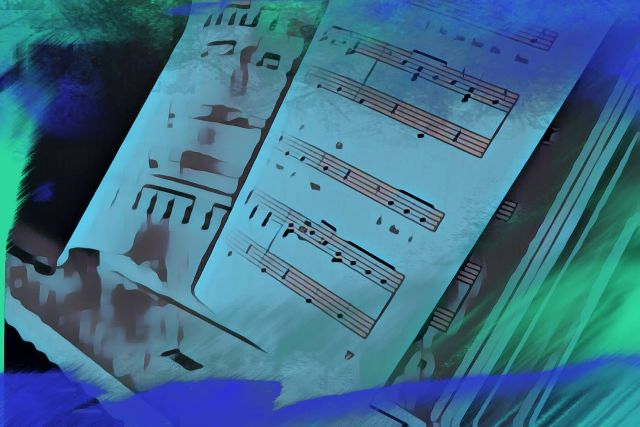 The Mixolydian mode is one of the most commonly used musical modes. You'll find it in various music styles, from blues to jazz to pop and beyond.

With such a pleasantly distinct sound, you're probably here because you're wondering how you can use this mode in your music.

Come dive in as we explore the ins and outs of the Mixolydian mode and how you can use it in your music.

The modes are western music theory scales derived from the seven diatonic scales. Each mode has a unique formula and sound.

While all of the modes are different, each one of them is based on the major scale, meaning they all use the same whole-step and half-step formula. The main difference is the root note that each of these modes starts on.

The best way to explore modes is by playing the C major scale (all of the white keys) on the piano, then shifting the scale up one note and playing the same notes.

So, let's say you start by playing the C major scale from C to C. That is called the  Ionian mode .

However, if you play the same C major scale from D to D, that is called the  Dorian mode  or  D Dorian .

If we were to take it up a step further and play the same notes from E to E, we would be playing the  Phrygian mode  or  E Phrygian .

For reference, here are all the modes based on the scale of C Major:

What Is Mixolydian Mode?

Sometimes, people refer to the Mixolydian mode as the  dominant scale , as the fifth degree of the scale is dominant.

If you were to play G Mixolydian, which is the Mixolydian scale of C major, it would look like this:

The Mixolydian scale uses a whole and half-step formula that looks like this:

If you were to look at that same scale in terms of tones and semitones, it looks something like this:

This arrangement is different from the whole and half-step formula of the major scale, which reads:

The Mixolydian mode and the Ionian mode (major scale) have a lot in common. The main difference is that the seventh note of the mode is lowered by a half-step or semitone.

The third note in the Mixolydian scale is a major interval, which makes this one of the major modes.

Here is what the Mixolydian mode looks like arranged in scale degrees:

When looking for the notes of the Mixolydian mode, I often like to use one of two methods.

The first method to finding Mixolydian mode starts with playing the notes of the major scale and starting on the fifth degree.

So, for example, let's say you are playing in the scale of G major, which reads:

You can count up from G to get to the fifth note of the scale (the dominant note), which is D. Then, starting from D, you can play all of the same notes:

This is D Mixolydian mode.

If you feel comfortable playing your major scales, then method two might work better for you.

To derive a Mixolydian mode from your major, simply lower the seventh in the scale by a half-step.

Let's say that you want to play in G Mixolydian, but you're playing in the scale of G major. Simply take G major (G-A-B-C-D-E-F#) and flat the seventh note (F#) by a half-step.

This method gives you the G Mixolydian mode:

The Mixolydian Mode In Popular Music

Since the early days of jazz and blues, the use of flatted notes, such as thirds, fifths, or sevenths, have been popular tools for creating unique sounds. The Mixolydian mode can be heard on plenty of early jazz records, even though many musicians didn't refer to it as Mixolydian mode.

The Mixolydian mode became very popular when Bebop rolled around, as players began experimenting with chord extensions and more chromatic styles of playing.

If you listen to albums from John Coltrane, Charlie Parker, Bud Powell, or Dizzy Gillespie, you can hear the Mixolydian scale all over the place.

Of course, even outside of jazz, there are plenty of great examples of the Mixolydian scale used in popular music. Let's look at a few other examples.

If you're a big fan of the Grateful Dead, you've no doubt been subject to Mixolydian mode offerings before. In fact, most guitar licks from the great Jerry Garcia utilize the Mixolydian scale.

This is because Mixolydian mode has almost become synonymous with modern blues music, and most of the Grateful Dead's music was inspired by blues.

"Dark Star" is a very lengthy piece of music that showcases Garcia's love for Mixolydian mode. The song uses the A Mixolydian scale that moves back and forth from A to Em.

If this piano melody isn't the most instantly recognizable melody of the early 2000s, we don't know what is. "Clocks" turned Coldplay into a Grammy award-winning band, and some of that fortune may have been thanks to the use of the Eb Mixolydian chord progression that you can hear throughout the verses and instrumental portion of the song.

Throughout most of the song, you can hear the Eb-Bm-Fm (I-v-ii) chord progression. The only time the band steps outside of the Mixolydian scale realm is during the "Nothing else compares..." refrain, where they use the diminished major third.

"All Blues" is a famous Miles Davis track from his 1959 release,  Kind of Blue . The song has terrific examples of riffs using the G Mixolydian scale.

While "All Blues" definitely grasps onto a traditional 12-bar blues structure, you'll find that the tonal center is G, and Davis utilizes the Mixolydian scale above it with the utmost skill.

With a Mixolydian progression, the song stands out from what you would typically expect from 12-bar blues, moving through a Tonic, Dominant, Subdominant, and Tonic structure. You'll often hear this scale being used in Miles Davis' music thanks to the melodramatic character it has.

Playing the Mixolydian Scale In Your Chord Progression

The Mixolydian scale is very flexible, meaning you can utilize it in many instances. However, you'll hear that it's most commonly used in jazz, especially when dominant seventh chords are played.

So, if you find yourself playing a chord progression with a dominant chord, such as G7, D7, or C7, you can play your Mixolydian scale over it, knowing that it should fit like a glove.

The Characteristics of the Mixolydian Mode

When trying to describe the characteristics of a mode, it's typically best to look at the flavors that differentiate it from the other modes. To do this, you can either look for half-step or tritone intervals, as well as whether the quality of the third is major or minor.

Mixolydian has a major third scale degree, meaning it is part of the family of major scales. The characteristic tone, however, is the minor seventh, as the trione between the major third and minor seventh solidifies its dominant scale quality.

We hope that this article has made a bit more sense out of Mixolydian mode. Using modes often feels overwhelming for musicians who know little about music theory. However, as with many things in music, formulas help simplify the task of implementing modes.