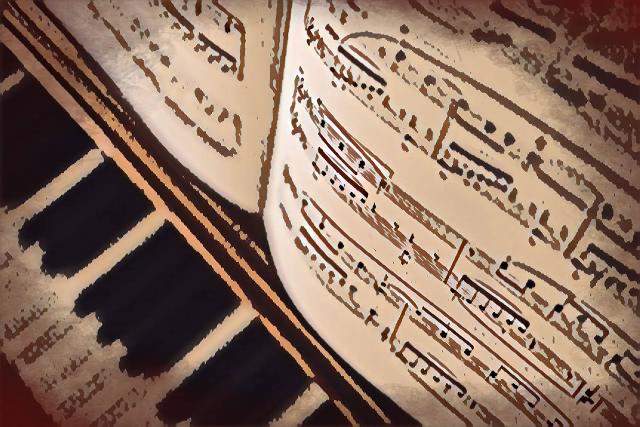 Today, we want to take a look at the Phrygian mode.

Now, as you probably know, there are many modes in existence. In western music theory, we have seven basic modes that we use to make music, all of which are based on the major scale.

The Phrygian mode is what many people refer to as the third mode.

Unfortunately, musicians often stray away from modal theory, as it can seem complex and overwhelming. Here at eMastered, we hope to simplify your understanding of modes one mode at a time.

Let's dive in and learn all there is to know about the Phrygian mode!

Before we get in too deep, it's important to make sure that you know what a mode is.

In Western music theory, we have major and minor keys, which we play diatonically. By diatonic , we mean that we stay within the notes of those keys or scales. A mode is just like a scale or key, though the difference is that the tonal center shifts.

One of the best ways to imagine a mode is to think of a piano.

The white notes of a piano make up the C Major scale moving from C to C.

Now, if we move up one whole step and start on note D, then move to the D an octave up while sticking to only the white notes, we've just played D Dorian mode. While the notes of D Dorian are the same as they are in the C major scale, the fact that we start an end on D gives it a different sound.

Next, if we move up one more whole step from D to E and move up from that E to the next E while only playing the white notes, we get E Phrygian mode .

So far, we're only talking about modes in C major, though we can use this same concept to derive modes from any of the major scales.

What Is Phrygian Mode?

Phrygian mode is the third mode of the major scale.

In C Major, the third scale degree is E, which is where we derive E Phrygian.

If we were in G Major, for example, the third scale degree would be B, which is where we would derive B Phrygian.

The idea here is that the Phrygian mode is the enharmonic equivalent of its relative major scale, meaning all of the notes are exactly the same. However, since we start on the third degree of the scale, it changes the way it sounds.

In E Phrygian mode , the notes look like this:

There are a few important notes in the E Phrygian mode, which we recommend keeping your focus on. These notes include:

How To Transpose Phrygian Mode

Though we've looked at E Phrygian thus far, it does not mean that we can't easily transpose it to other keys. Doing so is quite simple.

The easiest way to do it is to start with the E Phrygian mode, which you're likely already familiar with, and move that same scale pattern up or down a number of semitones or half-steps until you reach the new tonic you want to start on.

So, for example, if you want to move to F Phrygian, all you have to do is move the entire scale up a semitone from E. If you want to take it to C Phrygian mode, you can move it down four half-steps.

The second way to transpose your Phrygian mode is a bit faster, though it might be slightly more complex. However, I prefer this method to others, as it helps solidify a better understanding of the theory involved.

This method involves memorizing the whole and half-step Phrygian pattern.

The major scale has a whole and half-step pattern that looks like this:

On the other hand, the Phrygian scale has a whole and half-step pattern that looks like this:

How To Use the Phrygian Mode

So you're probably thinking,

How do I put this cool new mode to use in my music?

To give you something practical, here are a few things to think about when using the Phrygian mode:

Be Cautious of the b2

There's a saying in jazz music that we hear quite often, which says:

There isn't such a thing as wrong notes.

Genius instrumentalists are good at making wrong notes work if they are able to play around them in context to make them sound like they are meant to be there. However, there are certainly times when it becomes nearly impossible to rectify a mistake, and it's those times that a wrong note remains a wrong note.

When playing Phrygian mode, a lot of people have a hard time with the minor second, as it has a very unexpected sound. This is especially true considering how the scale then moves up a whole step from there.

For this reason, it's important to use this interval sparingly, as it can cause a lot of nasty dissonances. Of course, the last thing you want to do is avoid it altogether, as this interval is what gives the Phrygian mode its distinct sound. That separation from the major scale is what urges us to play modes in the first place.

Now, I'm also not saying that you should go out of your way to try and include it in random places when playing, though if you're trying to establish a Phrygian mode tonality, playing that minor second early on in a piece can get the listener's ears there faster.

When descending from the fifth or dominant to this minor second, that jarring tritone interval can also be a very powerful tool, especially if you want to showcase a moment of darkness or mystery.

Utilize the Chain Of Whole Tones

After the b2, the next-most important thing in the Phrygian mode is the chain of whole tones or whole steps that is a product of that b2. When you put a flat on the second scale degree, you get four whole tones right next to one another. The sound of these whole tones in succession is what makes the Phrygian mode even more interesting than it already is.

For starters, it is the beginning of the whole tone scale, which has one of the most recognizable qualities in music. The beauty of the full tone scale is that it never feels like it resolves. This push and pull between dissonance and consonance is often seen in film music, as it is great at representing dreams.

One thing I really like to do is descend on the whole-tone run before hitting the tonic of the Phrygian mode, as it provides a very clear resolution.

Many people feel that modes have specific purposes.

When it comes to Phrygian mode, many composers and musicians will use it for its dark characteristics. The reason Phrygian mode works so well with darkness is that it builds off of the minor scale, which is already very dark and adds an extra flat with the minor second.

The point is that you probably won't have the easiest time making a track that is light and bouncy with the Phrygian mode. However, if you want to make something that sounds evil, sinister, mysterious, or brooding, the Phrygian scale is the best choice.

One of the best ways to embrace the dark characteristics of this scale is by using its chromaticism. The tritone from the II to the V isn't often present in music, so using it to create a jarring point in your piece can be helpful.

Use The Phrygian Scale to Improvise

While many people view the Phrygian scale as a complex and theoretical tool, we urge you not to think about it like that. Instead, think about it like your typical natural minor scale with a flattened second note. When doing it this way, it makes it much easier to solo and improvise.

Now, of course, the Phrygian scale lends itself much better to certain kinds of music, especially metal and heavy hip-hop. You'll also often hear it in non-western music, such as middle-eastern music, Indian music, and African music.

With that said, there is no reason you couldn't throw it in a solo next time you're playing a blues track. The b2 can be someone of a passing note, even if you're playing in a minor pentatonic scale.

Once you start improvising with the Phrygian scale more and more, you'll become more comfortable with injecting pieces of it into your major and minor scales.

Let's take a look at a few of them.

You'll find the F major Neapolitan chord in this song, which appears directly after the E minor tonic chord. When you have a Neapolitan II chord in a song, it is one of the best indicators of a Phrygian scale.

This song is another great example of a top 40s pop song using the Phrygian scale. The melody for this song even starts out moving from the root or tonic to the b2 to let you in on the Phrygian secret.

The main chords in this chord progression are III to II in the key of F major.

The chord progressions in the verses and choruses look like this, respectively:

You can hear the Db Neapolitan chord transition to the C minor tonic triad using the Ab submediant as a unique resolution.

The Phrygian scale offers one of the most recognizable and distinct flavors in all of the modal music theory. However, because it has such a complex sound, it usually gets tossed to the side like some of the other "strange" modes, like Locrian.

The thing is, the Phrygian scale works as a wonderful alternative to your typical natural minor scale, helping to create tension, drama, and fear in your music.

When you sit down and spend time listening for the Phrygian in your favorite songs, listen for the use of the minor 2nd in the melodies and harmonies. In practice, make sure to borrow from the Phrygian mode every once in a while to get used to using its unique, somewhat diminished-sounding qualities.

We hope this little guide on the Phrygian scale was helpful in your journey to become a modal music theory master!