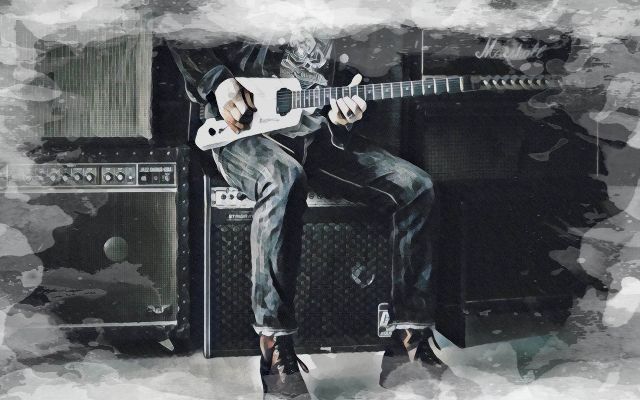 We know that some genres of music tend to lean towards major or minor keys. However, did you know that some music styles aren't exclusively minor or major? Enter power chords!

Below, we'll explain why power chords are so useful and share some songs that use this technique. We'll also demonstrate how to start playing power chords so that you can incorporate these power chord shapes into your music. Let's get into it!

What Are Power Chords?

Power chords are chords that aren't necessarily minor or major. In a typical major chord or minor chord triad, the third scale degree helps define the tone quality. Power chords only have two notes: the root note and fifth note, whereas typical triads have the root, third and fifth.

For instance, let's take a look at the C major scale. The C Major scale is comprised of C D E F G A B. A C major triad would be C E G. A C power chord, otherwise known as C5 would be just C G. In some cases, three strings might still be played to emphasize the root note of the power chord, equating in this case to C G C.

Eliminating this third-scale note creates flexibility, allowing guitarists to easily switch between keys or transition to different chords. In fact, power chord shapes are known for being easy to move across the neck of the guitar.

As showcased below, power chords can be represented in multiple ways on a guitar chord chart, but they often utilize similar shapes so that it's easy to move from one to the next power chord shape while playing guitar.

How To Read Power Chords

Guitar chords are most commonly used in rock music, so it makes sense that they are typically communicated through guitar chord charts. To read these charts, assuming you're in standard tuning, understand that it's meant to represent a bird's eye view of a guitar neck, with the leftmost string representing the low E string, to the A string, the D string, the G string, the B string, and finally to the high E string.

The number located near the nut of the guitar indicates what fret you're starting from. The closed circles on the string represent where you put your fingers, with the number showcased inside these circles dictating which fingers are used to play notes.

An "X" indicates which strings should not be played or strummed. The "O" represents strings that should be played openly, though note that power chord shapes typically don't include open strings.

Here's a D major chord for reference, though note that this is different from a D power chord. This chord has D F# and A where as shown below, D5, or the D power chord, only uses notes D and A.

Examples of Power Chords In Music

You might not know it, but power chords are likely in some of your favorite songs! Check out these examples of power chords in music:

Hear power chords at work on Smoke on the Water by Deep Purple:

Part of the reason Seven Nation Army by The White Stripes is so powerful because it isn't recognizably major or minor thanks to these barre chords:

Even one of the kings of rock keeps it simple in Whole Lotta Love ! Listen to Led Zeppelin rock out to power chords.

As you'll notice, there are seven different power chord shapes below based on the seven key notes of the musical scale.

However, know that the same chord can be played by other power chords as a separate variation. Each chord can be played in multiple ways depending on where you are on the neck of the guitar. These are not the only chord shapes for the described chords, just examples to get you started.

The A power chord shape can be played on the fifth fret with the index finger and the little and ring fingers on the D and A strings.

The B power chord shape can be played in the first position with the index finger on the 2nd fret of the A string. Your pinky finger and ring finger can be situated on the fourth frets of the D and G string.

As expected, the D power chord is the same power chord shape as C5, but two semitones or two frets higher starting on the fifth fret.

The E power chord can be played with the index finger on the twelfth fret, with the pinky finger and ring finger occupying the same fret on the fourteenth fret on the D and A strings respectively.

F5 is one of the easiest power chords to play since it's in the native position. The chord shape is created by using the first fret of the lower E string, and the third fret of the A and D strings on the guitar.

The G power chord places the index finger on the third fret, and the pinky finger and ring finger on the 5th fret of the D and G string. Otherwise, all the strings are muted as notated by the "x".

Ready to integrate a power chord into your chord progression? Check out these commonly asked questions and answers to help you play power chords.

What is a power chord?

A power chord is a two-note chord containing the root and fifth note of a chord. Since there is no third in the chord, power chords are neither major nor minor.

What are the basic power chords?

Some of the most common power chords are A5, G5, and F5. However, all notes of the musical scale can be turned into a power chord shape.

Are all 5 chords power chords?

Yes! All power chords are 5 chords or fifth chords since power chords contain the root note and the fifth of a chord. These chord shapes are moveable up and down the neck.

Is it OK to use power chords?

Power chords hold a powerful chord shape that can be moved around the neck, serving as seamless transitions between major and minor chords, or holding their own without defining major or minor tone qualities. Enjoy playing these unique guitar chords!