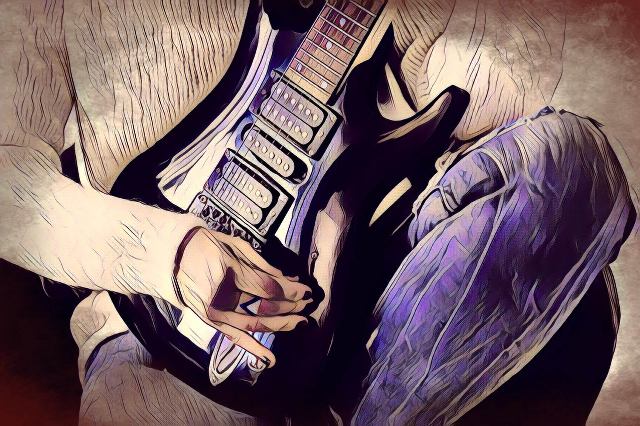 Rock music is enjoyed by music lovers all over the world. This genre is defined by its danceable rhythms and love of all things guitar. But how does one build a catchy, effective rock chord progression?

Below, we'll detail how to incorporate rock chord progressions into your music and share some of the essential history behind rock music.

What Is Rock Music?

Rock music is a popular genre of music that has stemmed from other genres like R&B, jazz, and country music, infusing a more electric sound. The broad genre of music stems from the 1950s, but it continues to be enjoyed and evolve today into subgenres like punk, metal, and indie rock.

The History of Rock Music

Rock music first appeared as rock and roll in the mid-20th century. This genre drew its chord structures and styles from genres like rhythm and blues, country, and jazz. Rock music emphasized playing with electric instruments like the electric guitar and bass, often crossing over into pop music.

It tends to have a verse-chorus form and tackles similar themes to pop whether that's love or capturing a political moment in time. Rock music was meant to speak truth to power, especially upon the development of subgenres like punk and grunge. Some of the earliest pioneers of rock music include Buddy Holly, Bill Hayley, and Elvis Presely.

The Elements of The Rock Song

So what goes into building a solid rock song? Here are some key sound elements you'll use to make rock music:

One of the factors that distinguish rock and roll from other similar genres of music is the use of electric instruments. Rock chord progressions are often played using an electric guitar and backed by an electric bass.

Riffing off of the jazz formula, rock songs often leave space for instrumental solos. A guitarist might play a solo and a drummer might have some runs within the same song. Rock music emphasizes variation throughout the entire song.

Like pop music, rock and roll is usually tied to a specific aesthetic. It's not just about what you're playing, it's how you play it. Real rockers know how to put on a show, and while this isn't music theory, it's certainly a central ingredient to a great rock performance.

You'll often hear a rock guitar chord progression played over a relatively simple beat. Beats 1 and 3 are emphasized with a snare on 2 and 4, usually in common time.

Rock guitarists create power chords on electric guitar. These chords aren't necessarily major chords or minor chords-- they have the root note and dominant, but no third to determine tonality. These chords make it easy for musicians to transition between a major and minor key if needed.

Are you ready to start making your own rock-inspired music? Here are some classic rock chord progressions and combinations to spark some inspiration.

Though less common, you'll hear this chord progression throughout rock music in songs like Liz Phair's Why Can't I . This progression starts off with a minor chord, giving it a sad, whimsical sound:

While this chord progression may look a bit intimidating, it's actually straight from the famous Pachelbel . You can hear it still in rock songs like Aerosmith's Cryin' :

Twelve bar blues progressions unsurprisingly build blues songs, but they also serve as the foundation of many classic rock songs. Hear this chord progression at work in Rock and Roll by Led Zeppelin:

Hear this progression in punk band Simple Plan's song Welcome To My Life :

While this is another variation of the four chords most commonly used in rock or pop songs, this order has a unique feeling that's earned its place across rock and pop in numerous songs:

What are the 4 chords of rock?

Rock and pop songs frequently reuse the same chords. One of the most common chord progressions is E, B, C# minor, and A since these chords are easy to modulate between major and minor, which is common in rock music.

What are the 3 chords in rock and roll?

In rock music, the most common chords represented by Roman Numerals are IV I, and V. In the key of C major, these are the F C G chords. However, the I V, and IV chords are well represented all across the rock genre.

How do you write a rock chord progression?

What is a standard rock blues chord progression?

A standard rock blues chord progression would be 12 bar blues. This traditional blues progression could be updated with rock elements like a steady drum beat and electronic guitar for a true blend of the genres.