What Is A Ghost Producer? 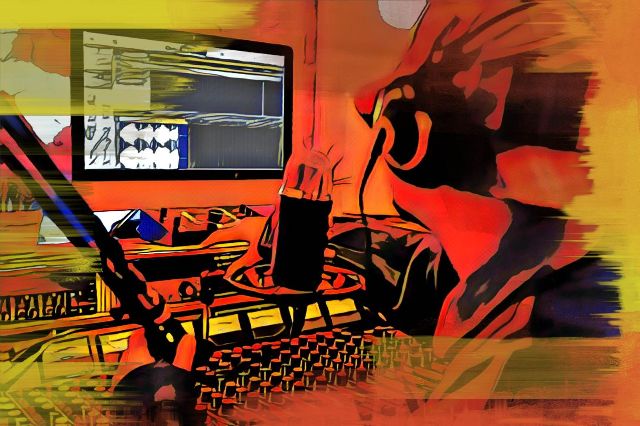 As you navigate your career, you'll come across the concept of a ghost producer. These producers are heard but not seen and are well entrenched in the music industry despite their covert status.

But what do these music professionals do? What is ghost producer etiquette and how do these silent producers operate? Below, we'll share everything you need to know about ghost production and share some of the most prolific ghost creators.

What Is a Ghost Producer?

A ghost producer completes all of the roles of a regular music producer. He or she may be involved in various parts of the beat-making, songwriting, and engineering process of creating music. The difference is that these producers typically execute their jobs without receiving public credit, whether that's in the form of song credits, and/or a portion of future royalties or promised publishing.

Ghost producers have a long history within the music industry. For instance, more than 60 percent of DJ Mag winners support the practice of using ghost producers. While ghost producers may not receive big bucks on the publishing end or official credit, they are usually able to negotiate a larger upfront fee due to this sacrifice.

In addition, music released by ghost producers provides an opportunity for relatively unknown producers to work with bigger artists. You don't have a huge name to create for other artists - it's all about the quality and fit of your work.

You might be surprised to find out just how common ghost producers are. The truth is, ghost producers are heard all throughout the music industry, across all genres of music. Even if they aren't initially hired as ghost producers, many musicians and creatives aren't necessarily listed on the formal credits of a single, EP, or album. Here are some of the most well-known ghost producers known for their reputation for building good music.

Martin Garrix has made a name for himself by securing artist collaborations with major artists like Troye Sivan. This artist has also built songs like Another Level by Afrojack and Stay Weird by Kenneth G.

Producer and artist KSHMR, otherwise known as Niles Hollowell-Dhar has produced many songs outside of his own artist project. Songs by Snoop Dogg, Krewella, Tiesto, and Far East Movement have all been touched by this multitalented producer.

As an amazing artist himself, Porter Robinson needs no introduction. However, it may come as a surprise that this talented producer helped create megahits like Clarity by Zedd.

Have you ever enjoyed tracks from superstars like David Guetta, Britney Spears, or Rihanna? You can thank ghost producer Nicky Romero for some of that star power. This dutch DJ is a well-known secret throughout the music industry.

This techno DJ has an impressive discography of over 400 tracks. By building tracks for big names like Swedish House Mafia, Quintino, and Will.I.Am, this producer has become a legendary ghost producer.

What Are The Benefits of Being a Ghost Producer?

Many artists use ghost producers making them a valuable asset to tens of thousands of listeners. But what's in it for the producer?

The Power of Collaboration

Ghost producers work much like any other music collaborator. These producers might be brought on by other artists, songwriters, or even other producers to provide a fresh perspective to a track.

In many cases, multiple people can build a stronger track than a single person, and ghost production can help facilitate this relationship without the pressure of divvying up credits.

Ghost producers help artists and established names come up with fresh ideas while they're managing the day-to-day responsibilities that come with being a public artist. While artists are busy touring and doing press and PR, they can start coming up with fresh ideas in the studio.

One of the most obvious benefits of ghost-producing is the privacy and anonymity that comes with it. It's certainly possible to help produce tracks for a household name while still upholding a relatively normal day-to-day life. Ghost-produced tracks may not include any direct ghost producer credits or could be listed under an alias.

While most ghost producers forego royalty income generated from publishing credits, you usually can secure a larger for-hire production fee upfront, which might be more practical for busy producers. Working as a ghost producer might provide a more predictable source of income.

One of the reasons why a record label or artist would hire ghost producers is to explore fresh, new sounds from a different perspective of the music scene. Producers that aren't under the pressure of the public eye are able to explore different parts of the creative process that the professional artist may not have access to.

How To Become a Ghost Producer

So how does one become a ghost producer? Unfortunately, just like a traditional music producer, there isn't one clear path to becoming a professional ghost producer. One thing is for sure - a ghost producer needs to be a great networker.

Traditional music producers may gain jobs based on their public reputation observed from their song credits. Since a ghost producer doesn't always have this luxury, he or she needs to have a strong backlog of beats to showcase their style and undeniable people skills.

Record labels are a tight system that can be challenging to break into. However, with deep knowledge of artist systems and connections, any ghost producer can break into the industry so long as they have undeniable hits and a willingness to keep pushing.

In short, becoming a ghost producer isn't something for the faint of heart. It takes plenty of hours of beat-making, experimentation, and most importantly, collaboration with other artists. So long as you focus on making music and creating the best tracks you can, the music will speak for itself. Balance your time between creating catchy beats and showcasing your skills to other artists.

How much do ghost producers make?

Ghost producers have a wide range of income, largely based on the level of artists they're creating for. These talented producers typically ask for a larger upfront fee for music production work since they likely won't get any royalties or credits.

Ghost producers take a one-time fee upfront from artists instead of receiving credits and royalties. These producers create music and are relatively unknown to listeners, speaking the "ghost" namesake. Ghost producers may participate in any part of the music process like building the beat, showcasing some of their best ideas, or ghostwriting.

Why do DJs use ghost producers?

Ghost producers can act as collaborators that won't co-op royalties or credits of a DJ. Occasionally, producers or artists will build a track that doesn't align with their specific sound and makes more sense under another DJ's tag. Established artists come with a brand, and bringing in new production talent helps maintain quality sound.

Do ghost producers get credited?

Typically speaking, a ghost producer is not credited for their work. In rare cases, a ghost music producer can negotiate a portion of the royalties but the "ghost" distinction refers to the music producers who opt for a larger upfront sum instead of expecting credits and royalties.

The role of a ghost producer isn't for everyone. However, if you prefer to remain anonymous while building your own tracks to support up-and-coming artists, ghost production could be an excellent fit!