What is Looping in Music and How do I Use It? 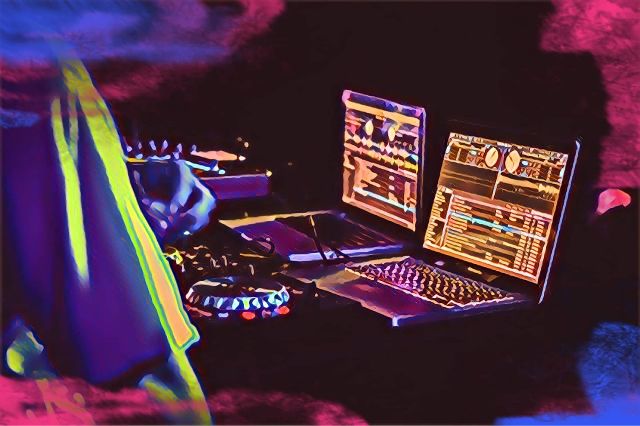 If you've ever listened to a song and wondered how the band was able to play the same sound or part over and over, the magic you’re hearing is probably a technique called looping. Whether in electronic music, hip-hop, or pop; many of the coolest sounds and samples are looped. Below, we'll talk about how looping became popular and how to loop music yourself using looper pedals or looper plugins.

What is Looping in Music?

Looping means repeating part of a song using a looper device, pedal, or plugin. The term "looping" originated with reel-to-reel tape machines. Before digital audio, engineers recorded bands on reel-to-reel tape. They would make a loop out of a section of tape and feed it through the tape machine, playing it back repeatedly, then recording the playback.

Nowadays, you can simply cut and paste parts within your digital audio workstation and then record as many takes as you want. However, back when the analog tape was the standard format, you had to physically cut the tape with a razor blade and splice it back together with tape to make any edits. As you can imagine, crafting your songs back then took a lot of patience and care.

Some of the early pioneers of looping in rock and popular music production were Jimi Hendrix, The Beatles, Pink Floyd, and Frank Zappa in the 1960s. However, looping actually started even earlier than in the 1960s with the electroacoustic music movement in the 1940s. Musicians like Pierre Schaeffer and Halim El-Dabh, among others, started making music by combining acoustic instruments with electronic sounds. The result was a sort of musical collage.

Looping artists in the 1940s

El-Dabh actually first used magnetic wire to record, rather than magnetic tape. Using a similar concept to magnetic tape, a magnetic wire is pulled across a recording head, which creates an audio signal using magnetic fields. El-Dabh cut up magnetic wire and later, magnetic tape, to paste together various musical pieces. Avant-garde artist John Cage cut up 600 different sounds for his piece "The Williams Mix". He then reassembled them onto new tape tracks.

Looping artists in the 1960s and beyond

As recording technology evolved and improved, musicians began taking the magnetic tape format into new territory by splicing the head and tail together and then playing the tape loop repeatedly, dubbing it onto a new track. This style of composition was used a lot by dub artists like King Tubby and later on in the 1970s, by hip-hop artists like Grandmaster Flash.

In 1963, composer Terry Riley began creating "ostinato music", meaning loop-based music. He built a hardware instrument to loop tape by using two tape machines synced together. He called it the Time Lag Accumulator and used it to record jazz trumpet player Chet Baker, as well as various loops of organs and other instruments. This is essentially an example of one of the first instances of sampling, and the Time Lag Accumulator was one of the first hardware loopers.

Frank Zappa was influenced by Halim El-Dabh and used tape loops to form the unique sound of his band, the Mothers of Invention. Zappa's sound was a mashup of various genres, from musique concrete to R&B to jazz and early rock n' roll, combining electric guitar sounds with snippets of political commentary and live performance footage.

He used tape not just as a recording format and as a practical tool in the studio but also as an entire instrument in and of itself. His music has been a source of inspiration for many artists of today, from Kraftwerk to Primus to Bobby Sanabria, spanning a wide range of genres and musical styles.

It's impossible to talk about the history of tape looping- or really the history of music in general- without mentioning The Beatles. Their 1967 album Sgt. Pepper's Lonely Hearts Club Band used many different recording and live performance techniques to build some of the most groundbreaking songs in popular music.

Considered one of the first concept albums, it used many repeated elements and patterns, as well as various audio effects such as reverb and tape delay.

Songs like "Strawberry Fields Forever" spliced together tape at various speeds and "Being for the Benefit of Mr. Kite!" played a tape loop of circus-style musical instruments, including backward sections.

The last song on the album, "A Day In The Life," ends with a concentric groove that will loop endlessly on turntables without automatic needle return. The effect is strange and surreal, yet concludes the album quite memorably.

German band Kraftwerk, formed in 1970, used homemade instruments, a Vocoder, looped electronic drums hit with metal sticks to create rhythms, and samples in songs like "The Robots", and "Music Non-Stop,". They've influenced many genres from synthpop to post-punk to funk.

Historically, looping in popular music has been used often in styles besides hip-hop, house, and other electronic music genres. In the early 1980s, Chicago-based record label Wax Trax! fostered the growth of many industrial bands that used looping and sampling via the Fairlight sampler and other early sampler devices and instruments.

Bands like My Life With The Thrill Kill Kult, Ministry, Front 242, and KMFDM sampled other instruments, movies, and sound effects. Looping and sampling were used in songs like "Headhunter" by Front 242 and "Godlike" by KMFDM.

What's the advantage of using loops?

When you write songs using loops, whether it's a rhythm or instrumental part, you won't have to play through the entire song and you can just use the parts of the song you like best. So from a production standpoint, music composition can be faster and more efficient using looped sections.

Looping also allows you to quickly come up with ideas and then layer them either using MIDI or audio tracks in your DAW (Digital Audio Workstation). There are things you can do using a loop that musicians might not be able to play in a live performance, such as very complex and layered drums or difficult guitar parts. Looping gives your music a more polished and precise feel.

In a live performance setting, you can use a looper pedal or similar device to loop a drum part and then play a synthesizer or bass line over it, or to loop vocals so you can have the effect of background singers even as a solo artist.

You might be wondering about the difference between loops and samples. The terms are often related, as a loop can sometimes consist of one or more samples, and a sample, or several samples, can be looped. However, samples are "found sounds" or recorded sounds that are then cut up and manipulated, and might only be played once. On the other hand, loops are composed in such a way that they can be seamlessly repeated, creating the effect of a longer musical part or song section (such as repeating a verse or chorus).

What hardware or software do you need to create loops? You might find that looper hardware is easy to use in a live performance setting, but that it's easier to do it with computer software in a studio setting. It's not cheating to use either or both!

As we mentioned in our history of looping in music, the first looper machines were magnetic tape machines. Nowadays, there are other options, such as the Boss RC-505 MK2 Loop Station , which fits right on your desk.

With this looper machine, you can record up to five stereo tracks and play them back all at once or individually. There's an onboard rhythm generator as well as built-in effects. A looper machine like this one is similar to a 4-track tape recorder, only it's digital and has a built-in memory to save your sounds. It also has a USB and MIDI to connect to other hardware or to your DAW.

Another option for a looper machine is the Roland MC-101 4-track Groovebox , which mainly functions as a drum machine but has programmable pads for various samples and sounds as well as built-in loops, drum kits, and instrument presets. It also has an onboard sequencer, so you can create your loops and samples and then arrange them and assign them to the pads or perform them live on the fly.

Looper pedals are a versatile and simple performance tool for any musician. They're great for instrumentalists and vocalists who want to add extra parts, an extra voice, or layers to their songs, especially in a live performance setting. The Boss RC-1 Loop Station Looper Pedal is a simple stompbox-style pedal for guitarists, bassists, keyboardists, or vocalists. It gives you up to 12 minutes of continuous recording and runs on a 9-volt battery just like any other pedal.

If you're planning on making music with loops in the studio and want to use your DAW, you can use software called plugins. Some looper plugins are free or have a free trial and others have either a one-time licensing fee or a subscription-based service.

Some looper plugins are meant for when you perform live, and others are more for studio and composition use. Some plugins allow you to import audio and then cut it up and manipulate it, like a sampler. Stagecraft Software's Loop Lab is modeled after old-school samplers and DJ-style mixers. Just like a tape machine, you can control the speed and pitch of your loop and manipulate it on the fly.

Other looper plugins are more like a software emulation of a hardware looper machine, with several tracks and a user interface modeled after the front panel or knobs of the looper machine. Some of them work with MIDI so you can assign each loop to a key on your MIDI controller keyboard. MeldaProduction's MSuperLooper gives you 16 tracks, making it great for live performance settings.

Most looper plugins can be used with Windows or macOS and are downloadable either as a VST (Windows) or AU (macOS) format. You can even get looper plugins for mobile devices running Android, iOS, or iPadOS.

The Process of Looping Music: A Step-by-Step Guide

So now you know about looping music and the tools you need to create your own loops. But how do you use those tools? What does it take to make a good loop? Here's a step-by-step guide to give you a starting point:

What about making a loop with a MIDI track? In your DAW, go to your MIDI sequencer window, or in your looper machine, go to your onboard sequencer. The same principles apply. With MIDI, it will be easier to get the timing right because you can edit individual notes and move them, and you can quantize them or swing them to manipulate the timing.

Now that you understand how to make loops, you can easily unlock your creative potential as a musician or producer. Use your imagination and don't be afraid to experiment with different techniques. After all, that's how some of the best songs were made.