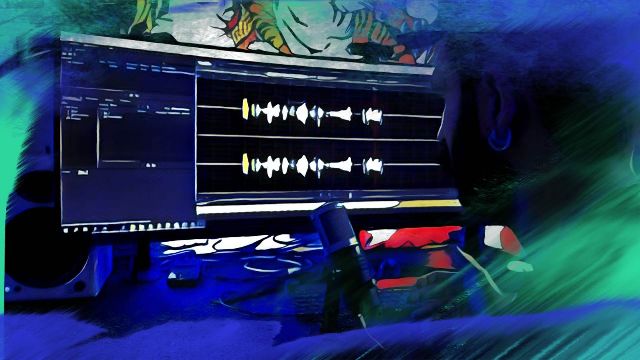 If you're into the music production process you've almost certainly come across the term 'overdubbing'. But what does this word mean exactly? How do you do it, and when should you use this technique?

You may even have already used an overdub process in your recordings without realizing it.

In this article, we're going on a deep dive to explore what is overdubbing, and how to use it effectively. With any luck, you'll finish the article with some creative tools to try out in your next session!

What Exactly Is Overdubbing?

Overdubbing is the process of recording a part, or multiple parts, to an existing recorded performance.

A super-simple example of this would be a vocalist recording his or her voice whilst singing along to a karaoke backing track.

TikTok's ubiquitous Duet feature is essentially a very basic form of overdubbing, more so when creators invite other users to sing along with their performance (remember the Bridgerton musical?).

In fact, with so much music being produced in DAWs nowadays, overdubs are extremely commonplace.

So that's what it is, but how did overdubbing come about?

A Brief History Of Overdubbing

Some of the earliest examples of overdubbing date back to the early 20th century, when artists and labels would take pre-recorded material and add other instruments to create a new audio recording.

Les Paul was a trailblazer in the early days of overdubbing, using a modified disk lathe to create layered sounds in one recording.

But it was a crude affair, until the invention of magnetic tape. This gave rise to multitrack recording, which opened up so many more opportunities to overdub.

Before we dive into the nitty-gritty of overdubbing, it's worth taking a look at the difference between overdubbing and live recording, and how you can mix and match the two approaches to best suit your style.

With live recordings, even if you use multiple mics and channels for different instruments, there isn't the opportunity to go back and fix any bum keyboard notes or drum-fill train wrecks.

If it's a live performance being recorded, you'll also have ambient noise from the audience bleeding into the stage mics.

At its most extreme, overdubbing would start with a click track and you would record each instrument one at a time until all the parts are recorded.

If you're a solo musician playing (or programming) all the instruments yourself, this is the approach you'd take, much like Terence Trent D'Arby did with his third album 'Symphony Or Damn'.

More often than not though, a hybrid approach is best, especially when recording popular music.

With this method of tracking, the producer or engineer records the 'essential ingredients' of the song first as a live ensemble. This is generally the rhythm section (drums, bass, and rhythm guitar), often with a rough guide vocal from the singer to guide everyone through the various sections.

Once these basic tracks have been recorded, the overdubbing process begins. This will involve recording additional parts, bringing in other musicians (for example string players, or a horn section), adding sound effects, and recording the 'real' vocals.

It's worth noting that overdubbing is also multitrack recording, but the opposite is not true.

A live performance may be captured on a multitrack recording without the use of overdubs. This makes the mixing process easier and can help filter out the audience and other unwanted noises from the recording.

The overdub process by its very nature requires the use of multitrack recording.

Which Technique Is Better?

There are benefits and drawbacks to both, so whether you choose the 'live' recording or the overdub approach really depends on the type of music you're recording.

Some styles are better suited to being recorded 'live'. These include classical music, jazz, and small acoustic ensembles.

As already mentioned, for pop music (in the loosest sense of the term) the overdub or hybrid approach is generally better.

There are plenty of reasons to overdub during a recording session. Some of the most common ones include:

Benefits And Drawbacks Of Overdubbing

There's a reason the process of overdubbing has migrated from analog to digital recording; it comes with many benefits, including:

That said, there are a couple of things to watch out for if you do overdub:

How you approach overdubbing depends on what you want to do with the original performance. Are you correcting existing material, thickening up a sound, or layering parts with a new sound?

If you're simply adding musicians to the final mix, or layering/double-tracking a part then you would record these on new tracks.

If you're layering up parts make sure you can hear the original performance while you record the new part.

The rich thickness of sound that comes with double tracked parts is a result of slight variations in pitch and timing between the two tracks. But these differences are subtle, and you'll still need to listen to the original part carefully so as to get the timing exactly right. Otherwise it'll just sound like the now-banned Columbia Football team marching band.

When double tracking you'll inevitably need to go back and correct one or two mistakes.

If you're correcting mistakes, you have a couple of ways of doing this. The most important thing here is to make sure the sound you're recording matches the recorded audio completely.

Option 1: Record to a new track

Simple really. Record the (hopefully) mistake-free part on to a new track and and mute the old one.

On a DAW, correcting this way is non-destructive, so you'll always be able to revert back to the original. However, you'll end up with a bunch of unnecessary tracks in your project, and things can get messy very quickly.

If you're old school and recording to tape, you probably won't have the luxury of extra tracks, so hop on to option 2.

Before the existence of DAWs, recording to a tape machine meant you didn't have undo options, or an unlimited track count. If a mistake was made, rather than record the entire part again, many musicians would simply drop in to correct the blooper and drop out again when it was fixed.

This required dexterity on the engineer's part to make sure they only recorded what was necessary, and didn't accidentally wipe the good parts.

Nowadays, all DAWs offer the ability to set punch in and punch out locations. Even if you're engineering your own session your computer will handle when to start and stop recording, so you can focus on the new performance rather than worrying about when to hit the record button.

The punch in/out method is also a great way of creating a short overdub to avoid tiring out singers.

Either way, if you're using the punch in/out method it's a good idea to play along with the track from a little before the punch in point, and continue playing for a little while afterwards. This will help smooth out any drop-in/out points, and make for a more effortless final performance.

Some DAWs allow you to non-destructively record alternative takes over an existing track. In this scenario you'd play back the project and record as many new takes of the part as you like on the original track.

This is similar to the punch-in-punch-out method above, but leaves you with more options at the end of the day. Depending on your decision making skills this could be a good or a bad thing.

If you use the loop function on your DAW as you're recording takes make sure it's set to record a new take on each cycle pass, otherwise you'll record over the existing part.

When using this method it's wise to set a limit to the number of alt takes you'll do. This will prevent burnout from the performer, and make the comping process less tedious.

Whether you use alt takes on the same track, or an entirely new track you'll need to spend time comping the different recordings together into one cohesive performance.

Ultimately, comping overdubs is a matter of getting the right balance between a flawless and a great performance. To paraphrase Voltaire, perfection is the enemy of good.

If you're lazy (or can't afford more time in the recording studio) there's a couple of software options that can mimic certain overdubbing techniques. They're not nearly as good as having someone lay down a fresh overdub, but if you're in a pinch they might just help you out.

If your guitar player has gone home for the night and you want to thicken up the part try copying the region and pasting it on to a new track. Pan these left and right, and add a slight delay to one channel. You can also try very finely detuning one track to avoid phase cancellation.

Izotope and Waves both offer vocal doubling software, that mimics the effect of double tracks to add richness and depth to vocals. While it's without a doubt quicker than getting a singer to sing a line exactly the same way twice, it can also sound a little fake, so proceed with caution.

Overdubbing is a fantastic tool that permeates so much of modern music. Without it we wouldn't have albums like Abbey Road or Nevermind (side note: Kurt Cobain hated the idea of doubling his vocals and had to be cajoled into it by producer Butch Vig).

However with today's technological resources of endless undos and unlimited track count it's easy to get carried away with overdubs in the studio, and lose the energy that made the song special in the first place.

My advice? Overdub in moderation, and let the music speak for itself.