What is Reamping: When & How to Use It? 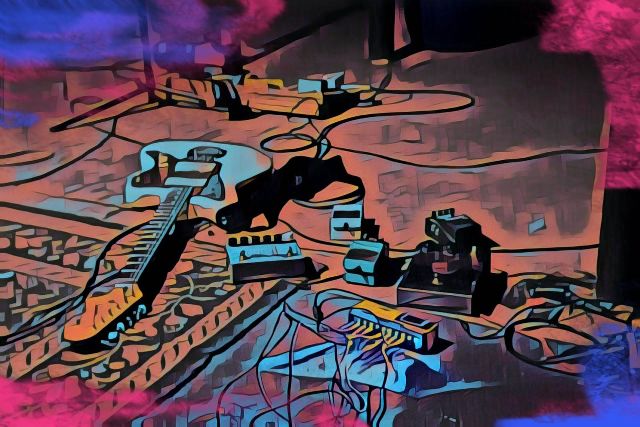 Re-amping. It's a common phrase you'll hear bandied about recording studios, and among groups of audio engineers when they're comparing techniques.

But what exactly is it and perhaps more importantly, how do you use this creative production tool effectively?

Read on, and all will be answered in less than the time it takes to play the whole of 'Stairway To Heaven'...

In a nutshell, re-amping is the process of taking a previously recorded dry guitar signal, feeding it through an amp and/or effects chain, and re-recording the end result.

Using this method, you can completely change the tone of a guitar part from when it was originally tracked. You can experiment with different amps and sounds from effects pedals, as well as fine-tune the settings on parameters such as distortion and reverb to better suit the production.

The best part? Since the guitarist has already laid down his or her performance, they don't even need to be in the room when you start fiddling with knobs.

The idea of re-recording sound isn't a new one. Way back in the 1930s, folks were taking sounds that had already been recorded, playing them back in different spaces, and capturing the end result.

But re-amping became a big thing with the advent of electric guitars, and this is how it's commonly used today.

Re-amping is also increasingly used on instruments other than the guitar. Vocals, drums, keyboards, and even virtual instruments, can all be creatively processed with the re-amping technique.

Guitarists are a picky bunch. Put two or more of them in a room, and you'll hear them having lengthy discussions about how to get exactly the right tone for a particular song.

Using the re-amping technique is like having a huge 'undo' button on your guitar sound, enabling you to fool around with amp and pedal settings to get the perfect tone long after the performance has been captured.

Here are some common reasons why you may need, or want, to re-amp a guitarist:

Imagine you're struck with inspiration at 3:37 am, and you just have to lay down that killer guitar line. No matter how good you are, your neighbors won't appreciate blaring amps in the middle of the night.

So, you plug in your headphones and use an amp sim plug-in to lay down the track. And voila! You can re-amp the guitar track using your 18-foot Marshall stack at a more sociable time.

If you're pushed for time in a rented space, re-amping will give you options after you've left the studio. Similarly, if you have lofty ideals regarding your fantasy guitar rig, it's way cheaper to pay a re-amping specialist to get that dream tone than it is to buy or rent the rig.

If you simply record the signal from an amplifier using a microphone you're stuck with that sound forever. What if there's a problem with the miking technique the audio engineer used? Or maybe you're not 100% sure of the tone you want for the song.

By giving yourself the option to re-amp later you can fix any issues with the sound, or experiment to your heart's content.

When you're mixing a track, it can sometimes be hard to make the guitar tracks play nice with the rest of the mix. Re-amping can help address these issues where simply EQ-ing the tracks can't.

If you envision your music having a long shelf life, keeping a dry signal version of the guitar parts will mean the song can be remixed with different (or more modern) effects when the spirit moves you.

As I've already mentioned, it's increasingly common to process other instruments using amplifiers and guitar effects.

Plus, of course, re-amping means you can focus on playing the guitar while you're recording, and spend time being creative with your tone later on.

Similarly, if all your music is recorded 'in the box' re-amping gives you the opportunity to add a breath of fresh air and real-world sound to your music.

What Gear Do You Need To Re-amp?

There are a few things you may, or may not need, depending on how you end up re-amping your tracks. These include:

Depending on your inclination, or your means, there are a couple of ways to go about re-amping your guitarus opus.

You've got a decent(ish) sound coming out of your guitar amp and you're ready to record your axemanship.

But you also want the option to experiment with alternative effects pedals, or perhaps a different amp, later on in the production process.

In this scenario, you'll want your DI box output routed to an input on your audio interface. This will record the dry signal.

Connect an XLR cable to the DI thru and mic up your amp to give you a sound that gives you all the qualities you need to create the right performance. Think sustain, feedback, etc.

Record the DI and microphone signal on two separate tracks.

When you're ready to start reamping, mute the wet track, and route the dry track through an output on your audio interface to your reamp box.

Connect the output of the reamp box to the guitar amp input, hit play, and adjust the settings and mic placement on the cab to your liking.

When you're ready to capture the sound, send the mic through an input channel on your audio interface and record to a new track in your DAW.

Note that you'll need to send out the right level of dry signal from your DAW to get the right character for the amp. If the re-amped sound is too much try blending in a little of the dry signal.

If you're an 'in the box' person and prefer to use amp sims and virtual pedals on your guitar parts, you're in effect always going through the re-amping process since the plugins are affecting the DI'd dry signal.

But there's more you can do than just changing amp models or effects pedals. By using busses and pre-fader sends, you can create complex and interesting tones. For instance:

Create stereo imaging with two different amplifier models. To do this, send the dry signal to two busses panned left and right, and set up different amp sims on each bus.

Create blended frequency-based amp layers. Set up a bus and send for each layer you'd like to create (for instance, a bass amp for the lows, a gritty amp for the mids, and a clean amp for the high end). Adjust the levels of each bus to your liking.

Remember that whichever method you use to re-amp, it goes beyond just your guitar sound. Using either method you can re-record any source - drums, synths, vocals - and get creative with the sonic world they live in.

The term 'Re-amp' is actually a registered trademark of the Reamp Company. The term and its associated patent date back to 1994 when it was registered by audio engineer John Cuniberti. Since then the term has become a common expression in the professional audio world, and the company acknowledges this. But it's still theirs, OK? So leave it well alone.