What is Timbre in Music: The Complete Beginner's Guide 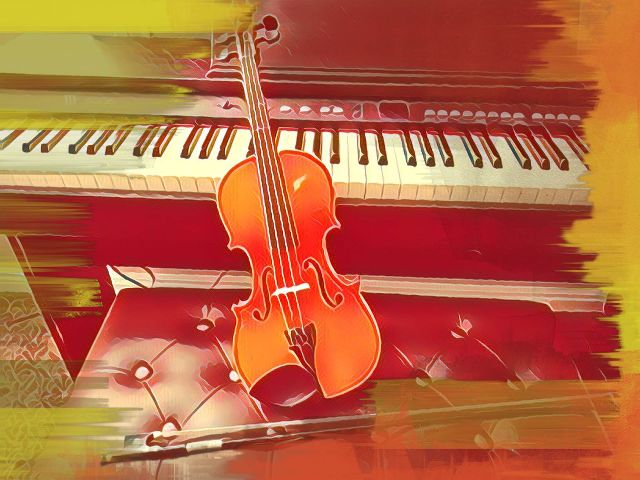 Timbre. Maybe you vaguely recall the word being bandied about in music theory lessons. Or perhaps you overheard some musicians using timbre to discuss a piece of music.

But what exactly is it, and how does it help you as a musician?

Read on, my musical friends, and all will be revealed.

How do you pronounce this odd-looking word, Timbre?

Timbre has it's roots in the French language, and as such can be pronounced a couple of different ways. Most common in the US is to make the 'r' silent, and pronounce it "TAM-ber".

You may also hear it pronounced "TAM-bruh", especially if you live in a country with a monarchy.

Either way works, and it's definitely not something to get into fisticuffs over. Potato, potata...

OK, great. So, what is timbre?

Picture this example: Carlos Santana and Wolfgang Amadeus Mozart, miraculously brought together to pitch electric guitar against 18th century piano. They take it in turns to play the note A. Specifically, A4 - the A above middle C on a piano, tuned to 440Hz.

Even though they're playing the exact same note, the two sounds are very different. So distinctive in fact, that even if your eyes were closed you'd know who was playing.

And that, in a nutshell, is timbre. In essence, it's the sound quality of a particular musical instrument.

But why do instruments have different timbres?

Short answer: because if they didn't, music would be incredibly bland. Imagine a world where there was only Nickelback to listen to. You get the point.

Any instrument, whether a physical one such as a french horn, or a virtual one like the excellent soft synth Serum, produces a sound wave made up of a frequency spectrum, and an amplitude envelope. These two chappies are the reason instruments sound different to one another.

The frequency spectrum is made up of the fundamental frequency (the note being played), and additional frequencies in the harmonic series above this - also known as overtones.

Different instruments produce different sets of overtones because of the way they're built, and the material used to build them. A simple wooden flute has very few overtones, whereas a crash cymbal creates such a complex harmonic series that it's a fool's game to try and assign a definite pitch to it.

Electronic manipulation of the sound (whether actual stomp boxes or virtual effects) further affects the spectrum. This is what gives an instrument its distinctive tone color. At least, in part. The other factor affecting timbre is...

If you've played around with synths of any sort you may be familiar with the concept of an amplitude envelope. Often abbreviated to ADSR - Attack, Decay, Sustain, Release - this envelope is the other contributing factor to the tone quality of a sound.

Every instrument has its own envelope. For instance, a piano makes sound by a hammer hitting strings, so the attack is short. A flute on the other hand has a softer, longer attack on it.

Changes in the envelope can cause the same instrument to produce different sounds. For example, a violin can be played with different bowing techniques. Each technique produces a different envelope and as such, a different timbre.

Regardless of whether you're working in the box, playing an acoustic instrument, or twiddling knobs on your prize vintage electric piano, every sound you make will produce its own frequency spectrum and envelope, giving it a unique sound quality.

If you want to talk about musical timbres it can help to identify various aspects that contribute to the overall tone color of an instrument.

Most instruments can be broadly classified into one instrument family or another. Some of them are obvious like all brass instruments belong in the brass family. Likewise, a string instrument is part of the string family.

These classifications stem from the western orchestral group of instrument families:

This group of families is somewhat narrow though and doesn't always help classify the many instruments found in non-western cultures. Some smart dudes came up with a different method, called the Hornbostel-Sachs Classification. This divides instruments up into groups depending on how the sound is made:

How the sound is made

The different playing techniques available on an instrument can make a big difference to the timbre. A classic example is a violin played with a bow (arco) versus plucked (pizzicato). It's the same instrument, but each sound has a unique timbre.

Likewise, the human voice can vary in vocal timbre. A mezzo soprano can be both breathy and airy, or forceful and brassy, depending on what technique the singer is using. Again, same instrument, but the physical characteristics make it a different sound.

Register & range of the instrument

The register and range of an instrument will also affect the overall sound quality. The two main terms you can use for this are 'treble' or 'bass', with the middle C on the piano being a rough divider between the two.

Role in the music

Finally, think about what role the instrument has in the music. A drum kit will provide a solid rhythmic foundation (if you pay the drummer well). An electric guitar may play a searing melody line, and so on. The role of an instrument in music helps contribute to its tone colour. (Yes, I'm British so sometimes I like to use my u's...)

Unlike many other elements in music, trying to define timbre is a subjective pursuit. Whereas a quarter note is always going to be described as a quarter note, how you define the tone quality of a musical instrument or group of sounds, is a lot less cut and dried.

You can use practically any adjective to describe timbre; rich, abrasive, distant, gentle. The list goes on and is only limited by your creativity.

It's helpful to reference instrument families, register, or role in the music when describing specific sounds. These identifications make the process of describing timbre less vague, and less likely to be misunderstood.

Wait, but why is timbre important?

Aside from the Nickelback effect discussed earlier, timbre is essential in matters both musical and otherwise. It's what helps you hear the difference between your best friend and your boss when they're talking, and (perhaps more importantly) know which voice belongs to who.

Likewise, it helps you hear the difference between musical instruments, and pick out what parts each one is playing. Try downloading a MIDI file and having all the parts play on a piano. It's a hot mess.

Why does timbre apply to you?

Whether you're just starting out on your musical journey or you're an established pro, timbre is a vital part of your production process.

If you're collaborating with other folks on your music, being able to talk about the musical timbre of different instruments helps you form a cohesive vision for your work and figure out what's missing from the sonic picture.

Experienced musicians can distinguish between different instruments based on their timbre, even if they're playing the same note at the same time.

Obviously, you're not going to mistake a trumpet for a crash cymbal, but spotting the difference between a viola and a violin playing in the same register can be tricky if you don't know the tone color of each.

So, learning timbre examples for different instruments will help you talk about music in a more comprehensive way.

Finally, and perhaps most relevant to contemporary music, is the fact that observing and defining timbre will help you sculpt your sound in a clear, uncluttered way.

Knowing how the musical timbre of each instrument blends with other instruments will help you create the sound you're after.

Whether you're mixing someone else's work, or producing your own tracks, pay close attention to the different timbres that make up the track. Are there too many similar timbres? Is there anything missing? Does your track sit well with the timbres of your reference track?

Timbre in music is another essential building block, just like rhythm, harmony, and melody. Start using it today whether you're listening to, or making music, and you'll soon notice a boost in creativity!