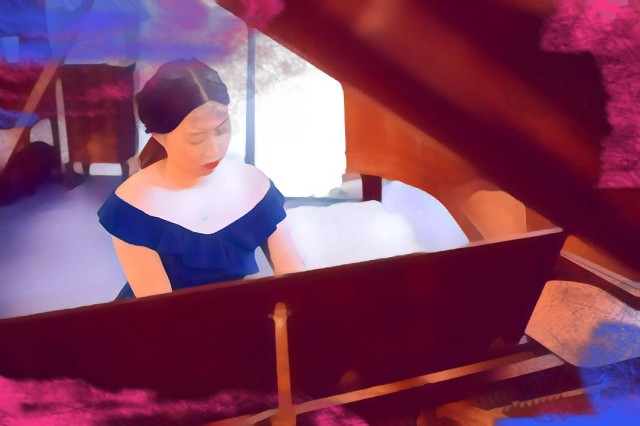 A chord progression is a collection of chords, usually in groups of three or four, that serve as building blocks for songs. The order of chords is important since switching up the configuration of a progression will change the overall feel of a piece. Chord progressions play on the relationship between different notes in context with each other.

To break it down even further, a chord is a group of notes that establish some sort of harmony, usually in the form of a root note, third, and perfect fifth or dominant note. These notes all have strong ties between each other that help in establishing the key, or the family of notes that a song belongs to.

Chords can be described as major, minor, augmented, or diminished. There are many different types of chords, but as a starting point, understand that happier, more popular music utilizes more major chords, while other genres or sadder music might use more minor chords. This is a generalization, but it provides useful context when playing in different keys or testing out chords from a minor or major scale.

Many popular chord progressions aren't overly complex and typically involve four chords in a repeated pattern. Once you understand how to create and read chord progressions, you'll find it's fairly easy to play most pop and rock songs.

What Makes A Good Chord Progression?

So, what makes a chord progression more or less more popular than another? In short, the relationships between notes in a progression.

The tone of a chord helps establish a mood and create an impact when moving from one chord to the next. For instance, the tonal quality between the tonic and third of a scale will determine whether a song is classified as minor or major.

Resolution is defined as coming back to the tonic, or the note with the least resistance within a chord progression. Chord progressions employ this tension to keep the listener engaged when moving between chords.

There's a reason why a handful of popular chord progressions can be used in so many songs. These tried and true progressions hold plenty of emotion the listeners can recognize intuitively just by hearing the relationship between notes of a chord.

How To Read Chord Progressions

You'll most commonly see chord progressions expressed in Roman numerals. Uppercase Roman numerals distinguish major chords from minor chords which are lowercase. These roman numerals are a chord's position within a key.

If you have a more classical music background or appreciate music theory, you might find yourself reading chords in standard, sheet music notation. Reading chords in this way can help musicians grasp the relationship between notes within a progression. For instance, take a look at this f g chord transition.

Nashville numbers were originally developed for session musicians, allowing them to quickly grasp a song's chord progression with a quick glance. It's essentially the same as Roman numerals just with standard numbers.

Chord charts typically use roman numerals just in an organized grid for quick, easy access. There's no shame in using these charts so long as you can understand the music theory that goes into them.

How Are Chord Progressions Built

In order to use chord progressions effectively, it's important to understand how they are built. A single chord is derived from a scale typically using the first, third, and fifth scale degrees. Let's use the key of C for instance.

Chord progressions are created by playing off of the established relationships between notes within these chords. For example, you will commonly see I IV V chord combinations pop up in common chord progressions. In the key of C, these are the major C F G chords.

These patterns of chords listed out in roman numerals translate to any key, not just the key of C. In the key of G major, the most prominent or strongly tied chords are still the I V VI chords, which are G major, D major, and C major. Western music uses this sound formula endlessly.

The first chord is sometimes called the tonic, the fifth chord dominant, and the fourth chord subdominant, in order of harmonic importance in relation to the native key of the song. For whatever reason, these three chords have strong harmonies between each other, which makes them a perfect backing for pop songs and beyond.

In other genres of music, songwriters may deliberately avoid settling on the tonic chord or using this pattern to deliberately create tension throughout a musical composition. In this way, chord creations and progressions are as much of a creative choice as picking out a melody or rhythm for your music.

Audio with the same chord progression can take on completely different meanings too. It's important to remember that chord progressions are just one of the components that make up the overall feeling of a song. Just take a look at the fraction and variety of songs that can be played with C F G and Am on guitar:

The I IV V, or variations of it, is one of the more common chord progressions you'll come across time and time again while writing. You'll also find a variation with four chords with I IV V I. You can hear this chord progression in rock and pop songs dating as far back as Chuck Berry's Johnny B. Goode :

12-bar blues is a progression that integrates the I IV and V chords. In this progression, you cycle between these chords for 12 bars as shown in the chart:

You can hear this progression in action through songs like Ball and Biscuit by The White Stripes and Red House by Jimi Hendrix:

Though this more complex chord progression isn't as popular in rock and pop music of today, you'll still hear it playing in older hits like The Beatles' Here, There, and Everywhere and Lean On Me by Bill Withers:

This atypical chord progression is often seen throughout songs with a jazz influence. You'll hear it in songs like Maroon 5's Sunday Morning and Satin Doll by Duke Ellington:

While this is a less common sound than other variations utilizing the I IV and V, this chord progression can still be heard in songs like Stand by Me by Ben E. King and Every Breath You Take by The Police:

This unconventional progression starts on a minor chord but is in a major key. In C major, this would equate to Am F C G. For example, you can hear this progression showcased in songs like Iggy Pop's The Passenger or Flo Rida's Whistle:

This chord progression, also known as I V vi iii, got its name for its famous use in Pachelbel's Canon. You can hear this progression in several songs including Memories by Maroon 5:

Chord progressions are the secret sauce to any standout record. A great progression serves as the foundation of any great song, so it's worth having an understanding of how they work. Hopefully, this guide makes it easier for you to learn all of the common chord progressions heard in popular music! Enjoy using these progressions to play along with some of your favorite songs.