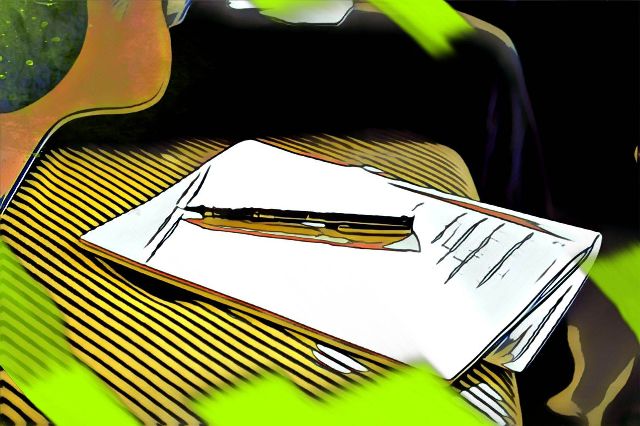 How Do I Read Chord Progressions?

Roman numerals are one of the more universal expressions of chords, with each numeral representing a position within the key. For instance, in F major, the F chord is the I chord or 1 chord. The V chord in F major is a C Major chord, since it's the fifth chord within the key. You'll see most chord progressions expressed in this way, with a major chord capitalized and a minor chord lowercase.

Nashville numbers take the system of roman numerals and make it even easier to read. Instead of a chord progression being expressed as I iii IV V for instance, it could be written as 1 3 4 5. This allows instrumentalists to easily jump in on any section of a piece while playing a session.

For beginner guitarists or instrumentalists, it might be easiest to read chords on finger charts or tabs. These diagrams show exactly which fret to place a finger on to complete a chord, making them very easy to understand. These charts are made to look like the neck of the guitar.

What Makes A Chord Progression Hard?

So what exactly makes a chord progression easy or difficult?

What Is The Easiest Chord Progression?

One thing to note is that guitarists can also change their tuning to make it easier to play chords on open strings. For instance, a car tuned to the key of G can simply be strummed to play a G major chord. The same is the case for any open tuning-- A F major chord that might be a bit more challenging in typical tuning is a breeze in open F major tuning on guitar.

This progression is incredibly common and an easy guitar chord progression for beginners. In G major, this progression equates to G C D major chords heard in songs like Sweet Home Alabama by Lynrd Skynrd.

The 1 5 4 is another extremely common chord progression that's easy for beginners due to it's simplicity. In F major, this chord progression is played with the F C G major chords or C G F in C major. You can hear this progression in classic songs like Simon & Garfunkel's Cecilia:

The I vi IV V progression has added complexity but is still fairly easy for beginners, incorporating major and minor chords. You'll often hear this easy chord progression in love songs like Whitney Houston's I will always love you :

You'll also see other variations of this progression like I IV vi V or the I V vi IV chord progression, for instance.

This is another common chord progression that plays off of the commonly used I IV and V chords. You can hear it in songs like Africa by Toto:

In the world of two chord progressions, I IV or I V are by far the most common. You can hear I IV in Bruce Springsteen's Born in The USA or I V in Chuck Berry's You Can Never Tell :

The ii V I is one of the more common chord progressions that starts with a minor chord. It's sometimes referred to as the "jazz" chord progression. You can hear this classic chord progression in plenty of songs! Check out just a portion of the songs that use 2 5 1 in this video:

How To Get Better At Chord Progressions

Make sure you're taking adequate brakes and stretching your muscles appropriately when playing your instrument to give yourself the best chance of playing chord progressions properly. For instance, here are some warm up exercises for guitarists:

Practice makes perfect rings true for all instrumentalists, from beginners to virtuosos. Carve out some time every day to play your instrument. Even if you're just playing the same common progressions repeatedly, your technique will improve with time and patience.

One of the best ways to learn your instrument is to experiment. Whenever you feel ready, try out different chord progressions and combinations, just for fun! There's no one right way to enjoy music and pushing yourself outside of your comfort zone is a great way to learn.

Challenge yourself to play a different genre of music or use an unfamiliar fingerpicking style if you're a guitarist. Take your progressions to the next level by adding hammer-ons, flourishes, and bass lines.

What are the 4 chords in every pop song?

The most common chords in pop songs are I IV V and vi. Pop music is built off of these chords since they have a strong relationship to the tonic of the key. Each roman numeral represents chord placement within the key of a song.

What is the most basic chord progression?

What are the easiest guitar chord progressions?

What are the 4 magic chords?

What is the best-sounding chord progression?

The best-sounding chord progression is ultimately subjective based on the listener. However, there's a reason why common guitar chord progressions like I V vi IV are so popular - they sound great!