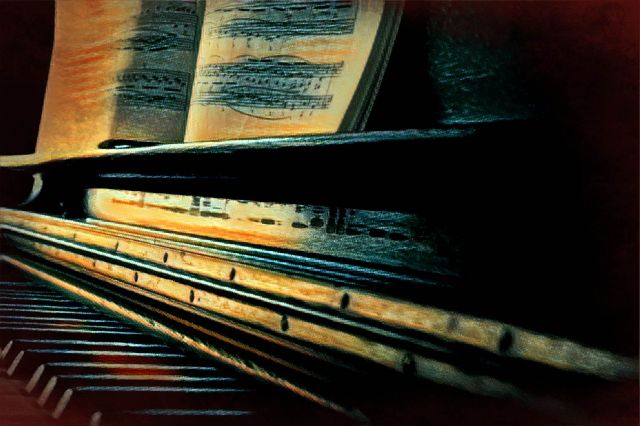 Gospel music is one of the oldest longstanding music genres that continues to influence today's popular sounds. Much of the magic of this genre can be traced back to the magic of soulful gospel chords, that easily charm listeners with their unique structure and sound.

But how does one create gospel chords? And where did gospel music come from? Below, we'll decode everything you need to know about gospel chords and share some common gospel chord progressions below so that you can use these elements in your own music.

What Is Gospel Music?

As the name suggests, gospel music is a subset of Christian worship music that is defined by strong vocals, harmony, and rhythmic accompaniment. This genre is sourced from African American churches during the late 1800s, built off of sacred songs and hymns.

The genre remains strong today and shares some resemblance to other genres like jazz which also share the genre's complex harmonic structure.

A chord is usually a group of three, called a triad, or more notes played simultaneously in harmony. These notes hold certain sonic relationships and play with dissonance, or sonic tension between different notes. You can have more or less than three notes in a chord, but triads are most commonly used as building blocks for most chords.

Chords are built from patterns of notes called scales, which all pull notes from a family of notes or key. In its simplest form, a chord is multiple related notes being played at the same time.

To understand the foundation of gospel chords, you should have an understanding of basic chord types. Here are the chords you'll find across all genres of music.

A major chord is built from a major scale, which is associated with a happier, pop or rock sound. These chords don't have a lot of dissonance. In the key of C, a C major chord is C E G.

Minor chords are built from a minor scale and are associated with a more mysterious, sometimes sadder sound. In the key of C major, the second chord degree D minor is spelled out as D F A.

An augmented chord, abbreviated as Aug, is built from a major triad. This chord type takes the fifth scale degree of a major triad and raises it up a semitone. So, C major augmented would become C E G# instead of the C Major triad's C E G.

A diminished chord takes a minor triad and flattens the 5th scale degree. If we wanted to take the A minor chord (A C E), and make it A Diminished (Aᵒ or A Dim), we would flatten the E to create A C Eb.

A seventh chord refers to building beyond the basic triad and adding an extra scale degree, in this case, the seventh note of a scale. For instance, if we take the C major triad, C E G, and add the seventh scale degree of C Major (B) we would create a C Major seventh chord otherwise known as Cmaj7, spelled out as C E G B.

Different types of music tend to utilize various chord progression patterns and techniques. For instance, most popular music revolves around the major I (tonic), major IV (subdominant), and major V (dominant) chords. Other genres like jazz and gospel music for that matter will add in more variation with minor 2nd chords, seventh chords, and other chord types discussed below.

Note that context matters with chord progressions. A different order of the same chords will still create a new sonic response since what we hear before or after a sound can affect our perception of it.

Gospel music takes the basic types of chords and elevates them to new heights. Here are common chord techniques seen in gospel music but not necessarily anywhere else:

A secondary dominant or augmented seventh chord is often used to switch keys in a progression. These chords contain the tonic or dominant of a chord outside the parent key, making them perfect for transitions.

Similar to seventh chords, an Add 9 chord is a major or minor triad that has an added 9th scale degree. For instance, Cadd9 would be C E G D as a major 9 chord. Minor 9 chords follow the same principle, using minor scale tones.

This principle can also be applied to other scale degrees, like 11 chords or even 13 chords.

A half-diminished seventh chord is a diminished triad with a 7th note that's been flattened by one semitone.

While these unfamiliar chord types can be confusing, it's important to remember that gospel music is fairly complex with, at times, unusual harmony and key changes. These chords often contain extensions that speak to gospel music's tendency to pull strong from one chord to the next with leading tones.

Are you ready to start making your own gospel or gospel-inspired music? Here are some of the most common gospel chord progressions that anyone can enjoy.

The 2 5 1 chord progression is a classic seen throughout gospel and jazz music alike. You can hear this progression in Kirk Franklin's Love Theory :

This chord progression finds itself in plenty of gospel piano and ballad classics. You can hear it in Tasha Cobbs' Break Every Chain :

The 5 and I chords still find their footing within gospel music. You can hear this progression at work in classic songs like Amazing Grace :

This chord progression, sometimes referred to as a gospel piano "turnaround", often embellishes the end of other chord sequences. Hear it in gospel songs like There Is None Like You :

Stepping into the wonderful world of gospel music is easy once you get to know the language of these specialized chord progressions. Hopefully, this guide makes it easier for you to start creating gospel music of your own.