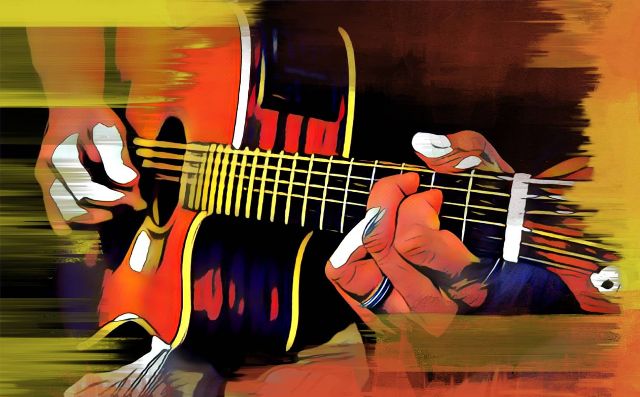 First, let's define what a chord progression actually is. A chord progression is a group of chords arranged in a specific order within a song. Usually, these are groups of three chords or four chords, but there are some songs that use just two chords or far more depending on their style.

Chords are collections of three notes built on a key, or family of notes. They can be described by using qualities like major, minor, diminished, and augmented. Major chords tend to have a happier, poppier sound while minor chords represent a more mysterious or sad sound.

Nothing is set in stone, but understanding that different chords and chord types evoke different feelings is essential to your success as a musician. Context matters too. The same three chords will sound completely different in an alternative order because of the sonic relationships between notes.

Guitar chord progressions are expressed in many ways, but universally, chords are represented by their scale degrees in Roman numerals. This scale degree represents what chord a musician is using in relation to the native key of the song.

Let's take the key of C major, for instance. The chords are built off of musical scales, so a major chord is created using the major scale. If we were to spell out all of the possible chords for the key of C major we would get the following:

Let's look at the chords of the A minor scale for good measure:

i – A minor chord

If music theory isn't your forte, don't worry! You can still play many songs without understanding a lick of theory. Just remember that certain individual chords are more common in music because of their placement within a key.

Understand Chord Progressions On The Guitar

The guitar is unique in that it's not necessarily intuitively laid out like the keys on a piano. Each note has a preset native note that can be adjusted based on the tuning of the guitar, which leads to the structural differences between open and barre chords:

Open chords utilize some of the open strings. This means they must be played in a certain position with a specific shape.

Barre chords are much more flexible. This chord technique involves flattening a finger across the fretboard so that there are no open strings. Barre chord shapes can be moved up and down the neck to create different chords.

A power chord is a two-note chord that isn't necessarily major or minor since it doesn't emphasize the defining third note. Power chords have moveable shapes and involve playing the first and fifth scale degrees, or the tonic and the dominant.

How To Read Guitar Chords

Guitar chord progressions are expressed in a multitude of ways. Here are some of the most common methods used to showcase guitar chords and chord changes across a progression:

These charts show the neck of the guitar with finger placements corresponding to each string. The "O" represents an open string whereas an "X" represents a string that shouldn't be strummed or played to create a clean chord:

The Nashville Number System is similar to Roman Numerals except the numbers are showcased in numerics. Chords are named according to their scale degree and broken down by parts like "V" used to represent a verse:

Fretboard notation is pretty self-explanatory. This format shows chords, tabs, and melodies in relation to the fret placed on each string of the guitar. For instance, here's an example of the first line of " Sweet Home Alabama ":

The "H" refers to a hammer-on. As you can see, this notation matches the neck of the guitar as closely as possible.

As discussed above, roman numerals are one of the most universal ways to share chord progressions. Roman numerals can be represented as uppercase to distinguish a major chord and lowercase to showcase a minor chord. The number of the roman numeral refers to the placement of a chord within a particular key.

How To Spice Up Your Chord Progression

Modern music doesn't just find 4 chords and call it quits. There are plenty of ways to spice up even the most common chord progressions. Use these tricks to bring your musical expression to the next level.

Walking bass lines can be found everywhere from blues to disco. Use this technique to create a more seamless transition between your chords. In general, don't just think about your chord progression, consider your song as a holistic picture to analyze how different parts interact with one another.

Guitars are unique in that you can use the lasting resonance of a string buzz to pull out new tones from a single strum. Use this technique to liven up your chord progression and transitions:

Spice up your progression by adding leading notes and flourishes in between chords. Doing so will create a lasting variation that can help keep a listener hooked, even if you're playing the same chord progression throughout the entire song.

7 Chord Progressions Every Guitarist Should Know

Without further ado, here are some of the most common guitar chord progressions every musician should know. We'll be sharing them in roman numerals and pair an example with each progression so that you can hear each chord combination in action.

As you may note, most of these chord progressions revolve around the tonic chord (I or i), dominant (V or v), and subdominant (IV or iv). This is because these three chords hold the strongest sonic ties between each other. You're bound to see these types of chords all across pop music, and songs that use other chords might have a more unique flavor, as seen with jazz music.

This is one of the most popular chord progressions in all of the popular music for good reason. The I IV V chord progression is heard across blues, pop, and rock with its heavy-hitting relationship between the dominant and tonic chord pulling back to the root note of the key. Songs that use this three-chord progression range from Johnny B. Goode by Chuck Berry and La Bamba by Ritchie Valens:

This chord progression, sometimes referred to as the pop-punk progression, is very similar to the popular progression above, just with an added vi chord. These four chords find their way in many songs like Zombie by the Cranberries, Not Afraid by Eminem, and Poker Face by Lady Gaga:

This progression is sometimes called the 50s progression for its prevalence across doo-wop and other popular genres of the time. You can hear artists use this progression in songs like My Girl by The Temptations or D'yer Mak'er by Led Zeppelin:

This classic minor chord progression can be seen all throughout popular music. You can hear this commonly used progression in Cage the Elephant's Come a Little Closer or Sade's classic Smooth Operator:

This progression can also be considered the Basic Jazz Progression for its groovy appeal. You can hear this progression in songs like Sofia by Clairo, Sunday Morning by Maroon 5, and Love You Like A Love Song by Selena Gomez:

This progression may be less common today, but you can hear it in popular songs of the classical age. It is sometimes referred to as "Canon" and can be heard in the timeless song Pachelbel by the composer Johann Pachelbel: