How Long Does It Take To Write A Song? 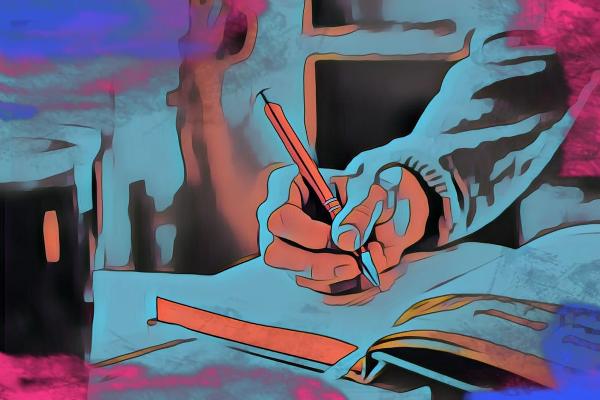 Songwriting is mysterious. For some, writing is second nature, and it only takes a matter of minutes to write a complete track. For beginners, the songwriting process can take much longer.

There isn't one right way to craft music, but we'll explore what goes into the songwriting process below. We'll also share how long it takes to write a song and offer a couple of strategies to help you speed up your process as an artist. Let's jump into it!

How Long Does It Take To Write A Song?

So, how long does it take to write a song? Unfortunately, there's no simple answer to this question. Even veteran songwriters experience a wide degree of variation during their creative process. Some songs may pour out effortlessly, while others are slowly crafted, over a period of days or even weeks.

There's also a lot of variation considering what type of song you're creating. Are you writing a demo? Trying to build a full track for an official release? Or do you just want to pen down lyrical ideas for a particular track? It's understandable that two songs could vary greatly in crafting time depending on technical merit alone.

You might not make a professional radio-ready hit song in a few hours, but most songwriters can pump out the foundation of an entire song within a couple of hours, or even a few minutes.

If one thing is for sure, songwriting is a skill that anyone can improve upon with enough training and practice. If you're able to practice songwriting on a regular basis, you'll undoubtedly become more efficient and become a better songwriter. When it comes to art, everyone is running their own race. But you can improve your efficiency by taking the time to improve your technical chops.

What Songwriting Method Is Right For Me?

One of the reasons that songwriting time can vary so much from one person to the next is that there are several ways to make an engaging piece of music.

There isn't a superior songwriting method. You just have to work with what makes sense for you. You might also find that your songwriting switches from one song to the next, which is perfectly normal. Here are some of the most common ways to start a song :

If you're a budding producer, it may make sense to make the instrumental first before writing the lyrics or other instrumental parts. This could mean making the full backing track before writing it, or simply crafting a 4 or 8-bar loop to help spark inspiration throughout your session.

Instrumentalists might be most comfortable writing alongside an acoustic guitar or piano. Novice and professional songwriters alike might write great songs starting with a chord progression, or a simple melody idea.

Having a strong melody and chord progression is key to building a hit song. However, when you listen to music, you're most likely connecting with the lyrics of the song, more than anything else. Therefore, it makes sense that some songwriters begin the writing process with words and nothing else. The best songs have raw, vulnerable lyrics that sync in seamlessly with chords and written melodies.

There are times when it feels as though a song writes itself. These periods of spontaneous inspiration are pure magic for musicians and usually lead to a good song. You can't always plan for these types of songs, but the more time spent honing your craft as a songwriter, the more likely you are to come across these magical music moments.

Crafting Your Own Style

As you navigate your career throughout the music industry, you'll find that there are endless ways to write songs. While learning how to write a song , try not to hyperfocus on what you're doing right or wrong. Allow yourself to experiment with one method on a new song, and try out different strategies with other songs!

You'll find that there are certain things that work best for you as an artist that don't necessarily resonate with all musicians. As long as your songwriting method is helping you to finish songs, you're doing something right. Create and curate your songwriting process to your needs as an artist.

What Is Part of The Songwriting Process?

Songwriting can be a fairly quick or arduous process depending on how you frame your workflow and whether you're planning on crafting an official release. Here are the different processes that go into crafting a professional release.

A significant part of the writing process is the brainstorming, planning, and songwriting stage. During this stage of the process, musicians will write the song including the chords, lyrics, melodies, and anything else that's designed to go into the song.

From the first verse to the chorus chord change, to the final verse, the song should be pretty much completed during this stage. Your song ideas need to be fully fleshed out before moving to the recording process so that you can save studio time for truly recording your creation.

The recording stage takes what you've written and puts it into a digital audio workstation or DAW. Any instrumental parts and vocals will be professionally recorded and mapped out amongst digitized samples, drums, or other software instruments.

During the mixing process, the recording is balanced so that all individual parts work cohesively with one another in the context of a song. A mixing engineer takes all of the components of a song and balances them to make a song as enjoyable as possible for listeners.

The final stage of the recording process is mastering. This process is carried out by a separate engineer or an AI-powered digital service like Emastered. Mastering is designed to balance out the perceived volume across all playback devices so that listeners can have a similar song experience, regardless of where they're listening to your songs.

Don't forget that an important part of any record is the marketing that comes after you put out an official release. In order to get your songs heard, you need to spend enough time promoting your song to your audience and networking with other musicians before prepping to repeat the songwriting process.

6 Tips On How To Write Songs Faster

Are you ready to put your skills to good use? Here are six tips designed to help you write songs more efficiently.

Sometimes the hardest part of songwriting is getting started. Starting a song from scratch can be exciting, but at the same time, the limitless possibilities could feel overwhelming. In order to give yourself a boost, try to select the first piece of the puzzle early on, or set up a challenge for yourself.

This could be committing to using a certain sample pack in your work, creating instrumentation with mainly one synth, or trying to create a song using only live recorded instruments and sounds. Sometimes, limiting your ideas is the best way to inspire new ones.

2. Learn To Work Past Writer's Block

Far too many musicians throw in the towel when faced with a little writer's block . Instead of giving up when you feel challenged by the writing process, learn to work through your difficulties. This could be breaking down your roadblock into smaller challenges, or starting a new session and taking another approach.

If you're serious about having a career in the music industry, you need to learn how to write a song, even when inspiration isn't free-flowing. There are some cases in which it might make sense to take a break rather than push through a songwriting challenge. But if you do so, make a concrete plan regarding when you'll be returning and what you'll address on a later date to work through your writer's block.

There is inspiration everywhere if you're wise enough to seek it out. Sometimes, we feel like we can't write a song because it feels as though we don't have anything to write about. Don't box yourself in. You don't necessarily have to take in an experience firsthand to express a feeling in music. Gather inspiration from media, nature, and your day-to-day life.

It's also wise to listen closely to references. When you play your favorite songs, what jumps out to you about the songwriting or skillset of the artist? Figure out what about musician's artistry attracts you to their work, and apply those lessons to your own songwriting process.

Time limits can motivate us to be more productive with just about anything. This definitely extends to songwriting, and you can likely get the foundation written out for most songs within one hour or two. Set a reasonable time limit for yourself, and do your best to complete your songwriting task within that set space.

You don't necessarily have to write a song in its entirety within your time limit. You could aim for writing the chords, a key change, the lyrics, or the main melody of the chorus. Break down your writing process into manageable chunks that will bring you one step closer to the finish line.

5. Get In The Habit Of Finishing Your Songs

Anyone can start writing a song, but only dedicated musicians know to dedicate time to finish them. Finishing songs, even if you don't plan to release them, is incredibly valuable and sets you up positively for your next musical creation. Think of every song as a stepping stone to your next masterpiece. You need to put in time and effort to finish out tracks as a way to grow as a songwriter and musician. Like any other skill, finishing your songs will become more natural over time.

Songwriting is a skill that gets easier the more often you practice it. It isn't about quality or quantity. Songwriters know that quantity breeds quality. Therefore, in order to write your hit songs, you need to stumble, fall, and learn with a bunch of "bad" songs first.

Learning how to write a song efficiently can take lots of practice, but try not to get discouraged. Even songwriters as great as Bob Dylan once struggled to make the amazing music he puts out today.

Have fun crafting music and trust the writing process regardless of how long it takes you.