How To Write A Folk Song in 6 Steps 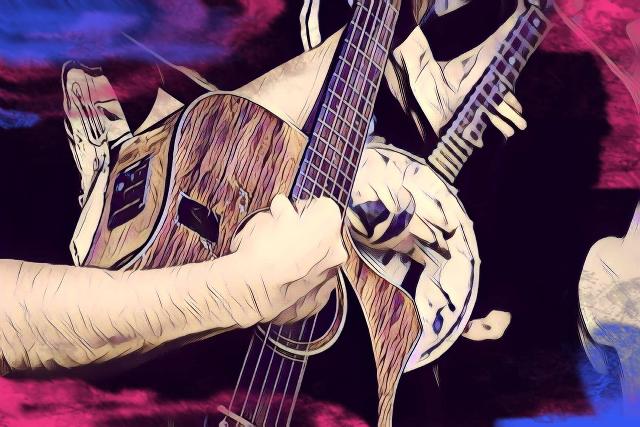 Folk music is known for its acoustic instruments and story-filled lyrics. This genre has carried its own for several decades speaking to its musical importance. If you're ready to learn how to write a folk song, you've come to the right place.

Below, we'll break down exactly what goes into writing a song , and how you can use those principles to make amazing folk music. Let's jump into it!

In order to write a great folk song, it's important to understand how folk music works. While contemporary folk music has its separation from the founding genre, there are some similarities that continue to hold their weight in today's music landscape.

Most traditional folk music is centered around a narrative or story that hooks a listener around a central theme. Folk music often features call and response sections as well, which makes sense considering that folk songs were often enjoyed in a communal context.

Folk music is widely diverse and often varied in tone based on the culture a folk song came from. Hence, instrumentation varies greatly based on a folk song's region, but some common instruments used in folk include the violin, fiddle, acoustic guitar, flute, mandolin, harmonica, and accordions. Cross-culturally, the most prominent folk instrument is the human voice.

How To Write A Folk Song in 6 Steps

Now that you have an understanding of the folk genre, it's time to start writing some of your own folk music! Here are 6 easy steps that will help you build a folk song from scratch.

Folk music is built on great storytelling. Therefore, you'll need to find some words, or at the very least, a point, before starting to craft your folk song. Traditional folk music might be based on a personal anecdote, political events, or even nursery rhymes. There isn't one right way to write a folk song, but you need to make sure you have a compelling enough story to carry on its own.

Remember, folk music is unique in the lyrics, and singing far outweighs the importance of other components of the songwriting process. Folk artists might not have the most complex music production in the game, but their lyrics and melody ideas shine bright when they write a song.

Need inspiration? Check out our comprehensive list of song ideas . Some starting folk music prompts could be focused on lost love, a lesson you learned, or hard life events you had to work through. It might also be helpful to develop a list of folk music reference tracks to kick off your songwriting.

Folk music is highly cultural, so writing one type of folk song can sound completely different from another. Have a couple of references ready to base your song format on. Of course, you should never plagiarize a song, but listening to references is a great way to get inspired during the songwriting process.

Starting your writing process could simply be writing some ideas for lyrics, or recording a melody for your future verse or chorus. Keep your voice memos or phone recording app open so that you can easily experiment with different ideas and work through them later.

This part of the process can feel overwhelming. After all, you're doing a lot of work! However, trust yourself that this is a part of the process. Don't focus on creating a chart-topping folk song, focus on writing a song, period. Writing takes plenty of practice, so the sooner you can let yourself play with different track ideas, the closer you'll get to building an amazing song.

Chords don't have to be super complicated either. In fact, many folk songs are based on just one or two chords. Picking a simple, major key is a great place to start. Remember, folk songs were originally passed on by oratory tradition alone, so it's totally acceptable to keep the instrumentation simple.

Folk songs often use vivid imagery, metaphors, or other literary devices to help lyrics shine. Folk music depends on having strong lyrics, so really take a look at your line structure before moving forward in the process. You don't necessarily have to use a traditional binary song structure, but your lyrics should ideally tell a story from beginning, middle, to end.

Create lines that build off of one another, each line revealing a new detail in the story. You or your singer should aim to have as clear of vocal delivery as possible. As songwriters, focus on making your lyrics the driving point of your music. Your audience will be listening in to hear the next line of your song. Create suspense and build your lyrics in the same way you would structure a traditional story.

As you would when writing any song, it's a good idea to implement a repeatable rhyme scheme and cadence to make your music more memorable. If it's easier, try writing out your lyrics as a rhyming poem first before putting it to music.

Once you have your lyrics, it's time to help them come to shape with catchy melodies. You can do this in several ways. For some artists, melodies naturally come to them. You might be inspired to sing certain notes when playing a rhythm or backing chords to your song.

Other musicians might find it easier to write out vocal melodies with an instrument first before singing them. As long as you're writing in your song's established key, this is a perfectly valid method!

Build strong melodies throughout your chorus and verses. From there, you basically have a completed folk song. You can add instrumentation and light rhythmic elements, but without the foundation of a strong melody and lyrics, you won't be able to get past this stage of the songwriting process.

Congratulations! You've put together a full draft of your folk song. It's now time to track and record your masterpiece. You can go to a professional recording studio to track your song or opt to record from home using a digital audio workstation or DAW.

Folk music is heavily weighted on the strength of the vocal melody and lyrics, so make sure you or your singer pays close attention to this part of the recording process. Luckily, folk songs tend to lean towards a more natural tone, so you won't have to worry too much about adding additional instrumentation or effects during the music production process.

Before heading into the studio, you should have your lyrics and melody memorized like the back of your hand. You'll also want to stay hydrated and get proper rest the night before so that your vocals can shine as much as possible.

After you've recorded your work, take a couple of days to let your song rest. Our ears naturally become fatigued after hearing the same sound in succession, so taking a quick break before jumping back in can be super beneficial. Once you're ready, take a critical look at your song. Are there any sections that could be improved? Does the story hold strong without the melody and vice versa?

Now is the time to make changes and go back to the drawing board if needed. Don't forget that many of your favorite songwriters have to revise music too! It's all a part of the process. Some songwriters might prefer to scrap songs and start anew. Do what works best for you.

If you're happy with what you've created, you can start playing your song out to trusted friends and musicians that can help provide additional feedback. From there, it's up to you to release your song and prepare yourself to create the next one! The best way to learn how to write an amazing folk song is to consistently put your writing chops to the test.

And there you have it! As you can see, learning how to write your own folk song isn't all that difficult. With some basic structure and thoughtful lyrics, you'll be able to write amazing folk music in no time at all.