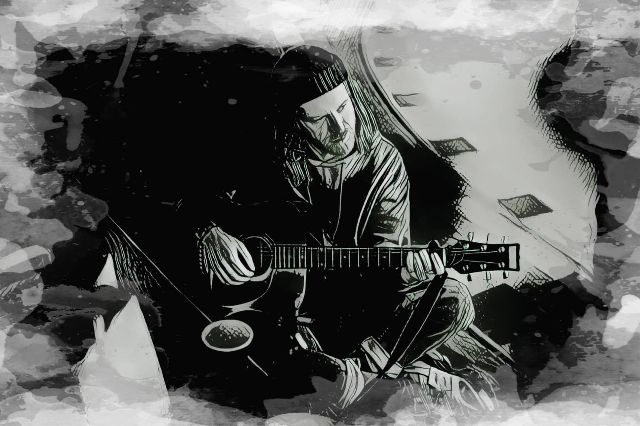 There's something so special about sad chord progressions. Sad and emotional music is easy to connect to and often leaves a lasting impression on listeners for years to come.

But how does one write a sad chord progression? And what makes a chord progression sound sad, to begin with? Below, we'll decode everything you need to know about writing sad chords so that you can write the best sad songs possible. Let's jump into it!

What Makes A Song Sound Sad?

Music is subjective. How a song sounds to one person may be completely different from the perception of another depending on their background, musical tastes, and experiences as a listener. That being said, there are some harmonic devices that might increase the likelihood of a chord progression being perceived as sad or emotional:

Minor chords are much more likely to have a sad or mysterious feel to them than major chords because they create more dissonance, or tension sonically. Just hearing a minor chord progression can set the listener to feel a more complex emotion.

Songwriters can set the tone of a sad song with sonic decisions like opting for a lower voicing or melody or even working with a slower BPM. The emotion of a song can change drastically based on the phrasing of the melody, so it's key that these elements are considered alongside the central chord progression.

Have you ever listened to what you thought was a happy song only later to listen back to the lyrics and realize it's somewhat dark? That's the power of lyrics! Words certainly manipulate the overall feeling of a song and their contrast against chord progressions can build a lot of meaning on their own.

"Sad" or "emotional" sounding music tends to have more tension between notes than a happier, open-sounding feel that's created with major chord progressions. Sad songs play with the tension presented within minor chord progressions and use it to communicate the overall journey of the speaker. Whether it's slower tempos, wide melodies, or the minor key, all of these elements interplay with one another when you write sad songs.

So what is a chord progression, to begin with? To start, it's helpful to define chords, which are essentially a group of three or more notes that create some sort of harmony based on the relationship between the different notes. Chords are generated from keys or families of notes. Hence, major keys create major chords and minor keys create minor chords. Note that using minor keys to create sad songs isn't necessarily a hard and fast rule. We'll showcase plenty of sad songs that use major chord progressions below.

Chords are identified by major, minor, augmented, or diminished tone qualities. They are also defined by their key and notated utilizing roman numerals. Lowercase roman numerals notate a minor chord or diminished chord. Uppercase represents a major chord. For instance, the chord progression I v vi can be read as the major one chord, minor fifth chord, followed by the minor sixth chord. The position refers to the relationship of a chord within the key or scale degrees.

"While My Guitar Gently Weeps" - The Beatles

This classic tune moves from A minor to G minor to create, a sad, emotional song, reflecting back the same sentiment of the song's title:

This Clapton classic is one of the unique sad songs that successfully uses a simple progression in a major key while still holding a sad sentiment:

Adele is the queen of sad ballads and "Someone Like You" is no exception. Listen to this sad chord progression shine in this modern classic:

The genius Joni Mitchell captures sadness to a T in "Blue"::

4 Sad Chord Progressions You Should Know

Are you ready to start writing sad or emotional music? Here are some of the most essential chord progressions you'll want to have in your back pocket:

This chord progression's minor third gives it a sad mysterious feel within a major chord structure. You can hear it in "Everytime You Go Away" by Paul Young:

This classic sad chord progression plays with the minor one chord while emphasizing the relationship between the four and five chord. You can hear it in "I Can't Tell You Why" by The Eagles:

This extremely common sad chord progression is seen in songs like Sarah McLachlan's "Building A Mystery":

For a more sad chord progression, check out this variation as exemplified in Guns N' Roses' "November Rain".

How Do I Create Chord Progressions?

As you can see, there are many simple progressions to build your song from. However, what if you want to create your own great progression from scratch? Here's how you can make your own sad chord progression, step by step:

To create a sad song, you first have to find a key that works for your voice or instrument. Pick a key that's well within your range if you're a vocalist. If you don't know where to start, it might make the most sense to opt for A minor since this key has no sharps or flats, making it incredibly easy to work with.

2. Identify Chords Within Your Key

Once you have selected your key, it's time to write out your chords within a key. For instance, in A minor, you would start with the i chord which is A minor. The ii chord would be B diminshed, the III chord would be C major. You can use the minor scale formula to help you build out these progressions note for note.

When in doubt, or if you're not that into music theory, consult a chord chart like the one below. Also keep in mind that sad chords don't necessarily have to be minor, it's just a good place to start.

Once you wrote out the chords for your key, the hard work is pretty much done. You can now play with different chord combinations to make your own sad chords for your song. Find yourself overwhelmed? Start by experimenting with your i chord, v chord, and iv chord. The iv chord and v chord naturally have a strong relationship to your i chord (tonic), so you'll find that it comes up time and time again within the context of songs.

4. Spice Up Your Chords

A chord progression can be as simple as two chords alternating from one to the other. It can also be highly complex-- if this is more suited to your style, you might want to add on top of your original chords. You can do this by creating leading notes in between two chords in a progression, building a walking bass line, or extending chords to include additional 7th or 9th notes. A great progression is a dynamic one.

5. Write Around Your Chords

Now that you have sad chords, it's time to test them out against the rest of your music! Start writing or singing along to your new progression to see if it "fits" within the direction you're headed. Don't get discouraged if your first set of sad chords aren't fitting with your song. Building a great chord progression can take time, and similar chords can create wildly different emotions and feelings depending on the context they're put in.

Let yourself experiment until you find something that works. You intuitively know what sounds sad according to your ears. Play around with different chord combinations and land on what draws out those emotions when in doubt. Hopefully, this guide makes it easier for you to use a sad chord progression for emotional effect in your music.