How to Write a Chord Progression: The Ultimate Guide 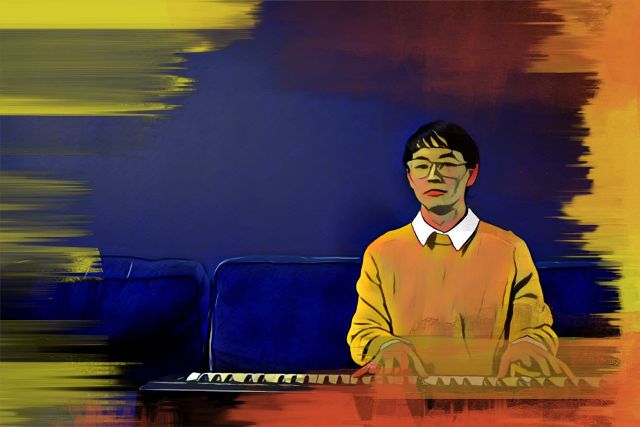 A chord progression is the backbone of any song. Whether you're an instrumentalist, beat maker, or singer, just about any musician needs to understand how to write chord progressions as it's an essential part of the songwriting process .

In order to understand chord progressions, it's important to take a more detailed look at the individual building blocks or the chords. Essentially, a chord is a group of three notes or more that sound harmonious together.

Chords are modeled after a particular scale, or family of notes. There are different types of chords with identifying tone qualities like major, minor, augmented and diminished. While chord interpretation is subjective, generally speaking, a major chord sounds happier while a minor chord has a more sad or mysterious sound.

How To Make A Chord

The basis of any chord is a triad, which is just music that speaks for a group of three notes. The formula of any chord is the same from one key to the next. Major keys are used to make major chords, while minor keys create minor chords.

Let's take the key of a C major for instance. This key is arguably the most simple scale, since it's all of the white keys on the piano, omitting sharps and flats. Spelled out, the C major scale is C D E F G A B.

To make a chord, you can take the first note (sometimes called the tonic), the third note (called the mediant), and the fifth note (the dominant.) So, in the C major key, a C major chord equates to C E G. Minor keys are the same -- the key of A minor consists of A B C D E F G, so an A minor chord works out to be A C E.

This formula works with any scale and any set of notes. For instance, the G major scale is G, A, B, C, D, E, and F♯. The major G chord is there for G B D since we take the 1st, 3rd, and 5th notes of a major scale to create a major chord.

A C major chord is built off of the three individual notes shown above.

You might not know it, but popular music often shares and recycles the same handful of chord progressions just in different keys. Understanding common chord progressions can be invaluable as a musician and make it much easier to improvise or efficiently write songs.

On a major scale, the Roman numeral analysis for the major scale appears as so:

On a minor scale, the Roman numeral analysis looks like this:

Different songs evoke different feelings due to the setup of the chord change within a progression. Most common chord progressions can easily be decoded with a little bit of music theory. By understanding chord progressions and how chords relate to other chords, you're able to make music that matches what you're trying to create and communicate effectively within the music industry.

How To Write A Chord Progression In 7 Steps

To start, you'll need to pick out the key to set your chord progression in. This is a generalization, but most popular music tends to reside in a major key since it has a "happier", more upbeat sound. Minor keys generally feel more mysterious, or sad to some listeners depending on the context.

Since art is subjective, there are no rules! Just land on a key and stick with it. During this stage of the process, it's also worth considering how you plan on finishing the rest of the song. Will you be singing on the rest of the track? Make sure you select a key that's well within your range. Planning on layering samples? Be prepared to match the key to the samples or warp the sample to fit your chord progression accordingly.

2. Identify The Chords Within The Key

Now that you've selected your key, it's time to spell out your seven chords. You can do this by hand utilizing music theory, or look up a chart online. For our example, we'll use the key of C major, which consists of C D E F G A B.

Once you've notated all of the chords within a major or minor key, you basically have created a cheat sheet for your progression! You have everything you need to write chord progressions once you take the time to write out the seven chords of any particular scale.

Congratulations! You've made it past the most difficult part. Now, it's time to put those chords to good use. Pick a chord to start on -- Chord choices at the beginning of a progression are usually settled on the tonic chord, but there is always room for experimentation!

Keep playing with chord changes while you write music to find what works best. Chord progressions most commonly consist of three or four chords, but you could have a feasible progression that uses just two chords or five or more chords!

If you don't know where to start, work with your I chord and V chord: The dominant and tonic chords naturally have a strong relationship, so these chords are bound to work well next to each other. You can also opt to use one of the common chord progressions referenced below or look up the chord progressions of some of your favorite songs.

If you find yourself struggling, experiment with working on different instrumental parts first. For instance, a simple bass note or an improvised melody can help inform where your progression goes.

Generally speaking, your first chord should help establish the key you're writing the song in, and the final chord in your chord progression will help lead back to the first chord making the progression a seamless loop.

4. Test Your Progression With The Melody

Now that you have a chord progression, you'll have to start to build out your song. After all, plenty of chord progressions can sound great on their own, but when paired with a certain melody do not gel.

There are many different ways to write a song , but having a progression should make your job easy. Expand upon your chord progression by layering a melody, drum beat, or rap on top of it. If the chord progression doesn't seem to match the mood you're trying to create, it might be time to take a step back and revise your initial chord progression to better fit your song.

One of the most important things to consider about chord progressions is that they don't necessarily have to stay stagnant. You might have a basic chord progression for the bulk of your song, but this can certainly be changed up during the chorus, verse, or bridge of a song, even if that's just inserting another chord into the progression.

You can also consider working on a key change if that's something you're into. Just make sure that your changes in the chord progression are designed to the arc of your song.

When you build a chord progression, you want to move from micro to macro. You'll start with a single chord, move to test out the chord within the context of a progression, and then you need to try out your full progression within the space of a song.

It's important to give these individual checkpoints their own weight since the impact of a progression changes based on what comes before it and after it. Music works when your progression supports the overall feel of your song, and flawlessly transitions from one pattern to another when moving from your main chord pattern to an alternate one during the chorus or bridge.

Make sure your transitions feel seamless and supported by your progression. It's super helpful to seek out feedback from trusted musician friends and family members who can help you determine whether your chords are supporting your lyrical and melodic ideas. If you find common threads of feedback, don't be afraid to adjust your progression for the better!

Once you've mastered maneuvering basic chords, you can move on to making better chord progressions. An easy way to make more compelling chords is to transform basic chords into 7th chords -- 7th chords have essentially the same structure as any minor or major chord, except that they have an added extra note: The 7th of the scale, otherwise known as a leading tone.

By adding this tone quality, you're emphasizing the tonic of the chord and creating a mysterious, more complex feel. You can also add more chords or notes in between the main chords in the progression that help lead to the next sequence.

Looking for a chord progression that emphasizes minor chords? Start with this progression. This classic progression appears in Maroon 5's hit, "Sunday Morning":

And there you have it! You should be able to create ample chord progressions in your own songs. Have fun experimenting with different chord combinations to match the message of your music!