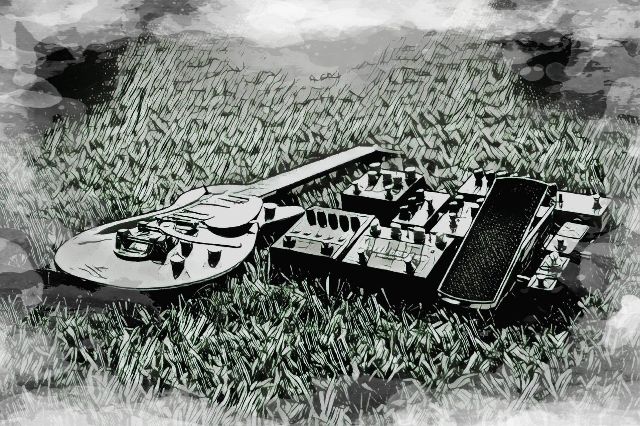 There's a reason why reverb is used in nearly every modern recording. This effect instantly places instruments, effects, and vocals into a natural-sounding space, effectively bringing our recordings to life.

But how can you identify reverb in a recording? What does it sound like? In this guide, we'll share 21 amazing examples of reverb in songs across all genres of music. We'll also briefly explore how reverb works, though consider checking out our complete reverb guide for a more comprehensive overview. Let's jump into it!

In its simplest terms, reverb is reflected sound. When you're in a room with a lot of space for expansive sound, say an echoing church chamber or empty swimming pool, your voice carries and reflects off of the surfaces around it, creating a unique sound.

This sound is known as reverb and can be altered based on room size, reflection type, and attack/decay times. Digital reverb aims to recreate the feeling of these spaces by creating modules that model a hallway, chamber, or church.

There are plenty of different types of reverb including gated reverb, hall reverb, plate reverb, convolution reverb, and spring reverb (as used in Fender amps) to name a few. Reverb is used across any genre of music and can be heard on tracks' vocals, effects, and instrumentation. Sound engineers can record natural reverb by manipulating their recording environment or use digital reverb to recreate that live sound.

The best way to understand reverb by far is to listen to it yourself! Here are some iconic songs that harness the power of reverb in a number of ways.

This song has risen on global charts for its dreamy, melancholic feel. The famous bridge of this song is a perfect example of vocals coated in reverb:

Suki Waterhouse's TikTok hit has catchy lyrics sung in a washed plate or hall reverb. Experience the reverb of this song throughout the entire track:

Only Time By Enya

Enya's voice has an ethereal quality to it, which is only amplified by her choice of production. In this classic song, Enya's voice shines with reverb. You can also hear this in her other hits like Orinico Flow.

Cosmic by Shinedoe is washed in reverb, giving the instrumental a transcendental feeling as it moves from one section to the next:

Grimes is known for using heavy delays and reverbs all throughout her early work, especially on Visions . Genesis is no exception:

Down By The Water By The Drums

The Drums create a sound that's somewhere a cross between The Beach Boys and beloved Joy Divison. Hear this enchanted track glued together by a strong hall reverb:

Beats are the focus in Purity Ring's Fineshrine. The floaty vocal weaves in and out with the help of reverb and compression:

Ready To Let Go By Cage The Elephant

This rock classic has tinges of reverb on the guitars in the chorus creating a warm bed of sound in the chorus:

This sleeper hit is earmarked by the dreamy, reverbed vocal intertwined with this dream pop shoegaze beat:

Caroline Polachek introduces contrast with reverb through the kids' choir that enters in towards the end of this indie hit:

This cult classic may differ from Led Zeppelin's usual discography, but it's well-loved for good reason. You can hear the drums doused in a bit of reverb in contrast to the sticky guitar riffs towards the front of the mix:

While lesser known, Avalon holds a dreamy feel thanks to the reverbed keys and vocals.

You'll notice that in this indie pop hit, the main vocal sounds slightly far away from the center of the mix. It's likely that Grace Ives' main lines are coated in some subtle but effective reverb:

(Everything Is) Debatable By Hellogoodbye

This indie favorite features a heavily reverb-ed vocal. Note how the main vocal feels fairly far back in the mix compared to the rest of the production.

FKA Twigs' ethereal vocal quality is perfectly paired with reverb in Sad Day amongst the rest of her discography:

Once In A Lifetime by Talking Heads

The sounds on the classic Once In A Lifetime are showered in reverb. Listen to the main arp and vocal:

Legendary producer and soundstress Bjork is no stranger to vocal effects. Her ambient sound is crafted with the help of reverb in Joga :

In The Air Tonight By Phil Collins

Phil Collins creates sonic contrast through his use of reverb in this classic song. From the drenched guitars to the distant vocal sound, this track would not be the same without its gated reverb.

In this ethereal track, Daniela Lalita creates a distinction between the main vocals and backing vocals through the liberal use of reverb on the backing voices:

Heroes by none other than David Bowie has a dreamlike quality due to the reverb vocal sections interspersed throughout the track:

Dub You Can Feel By King Tubby

This Dub and Reggiant pioneer used reverb to create a signature sound as heard in Dub You Can Feel :

Ready to incorporate reverb into your own music? Check out these common reverb questions and answers to expand your understanding.

Why do songs use reverb?

Reverb creates a feeling of presence and liveliness in a song that can sometimes be lost in a treated studio. In addition, engineers can use reverb to bring a sound forward or backward in a mix.

What does reverb actually do?

Reverb is emulating the reflection of sound after its placed in a certain space. When you hear your voice reflected to you in large, airy spaces like a church, you're experiencing the effect of reverb.

What are the different types of reverb?

There are plenty of different types of reverb, usually relating to the type of space the reverb is working to emulate. For example, you'll probably come across gated reverb, hall reverb, plate reverb, convolution reverb, and spring reverb.

In short, reverb is an incredibly important ingredient to any song. Hopefully, these awesome examples inspire you to use reverbs to capture new emotions in your next song.