How to Harmonize: The Ultimate Guide for Beginners 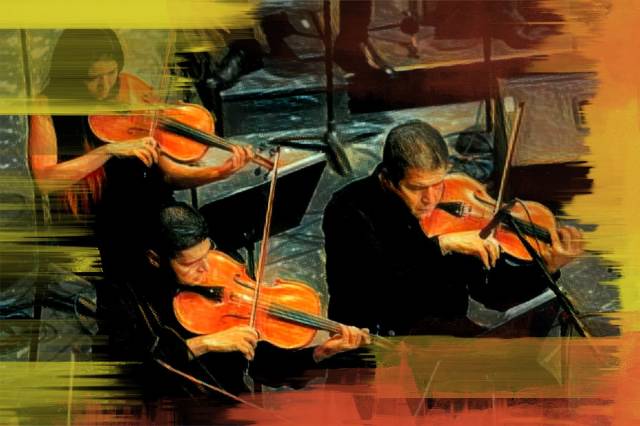 When it comes to most musical pieces (unless you're dealing with ancient Gregorian chant), you have melody and harmony .

While melodies are catchy, helping to maintain constants throughout a piece that listeners can attach themselves to, harmonies can transform a piece of music, adding new layers and dimensions that melodies couldn't do alone.

Let's hop in and learn how to harmonize in music, whether you're a singer or instrumentalist.

How To Harmonize a Melody

While harmonizing melodies doesn't require a ton of music theory knowledge, there are a few basic theory concepts that will make harmonizing with melody notes much more effortless.

Before you dive in and start harmonizing notes, you must understand the melodic intervals found in the various keys. To give you an example, we'll look at the key of C Major , as this key does not have any sharps or flats. If you were to play the notes of C Major on the piano, it would look like this:

It's a good idea to play or sing these notes in succession to get a feel for the key. For example, once you have a good feeling for the key of C, you can begin looking at its chords, which are composed of these intervals.

The most basic chord in the key of C Major is made up of three notes (C-E-G) . We recommend playing these notes all at once on your piano or instrument to hear how they blend and harmonize with one another.

While your practice should consist of finding intervals from all notes, for this example, we'll stick with C. Here are the intervals from C and how many half-steps away they are from one another:

When trying to find intervals that blend well with one another, it's a good idea to practice singing or humming along as you play notes. For example, if you sing a root note and its major third, you'll realize how pleasing the chord tones are. On the other hand, if you sing a root and its augmented fourth in succession, you'll recognize how dissonant the chord tones are.

Understanding the Difference Between Major and Minor

The notes in major keys are different from minor keys, which is why it's important to get a feel for both.

For example, if we were to take our example of C major and switch it to C minor, our root or tonic chord would be the C minor chord.

Whether you are a singer, an instrumentalist, or both, we recommend that you sing and play piano when you practice. However, if you don't have a piano at home, there are plenty of great virtual piano apps that you can download on your smartphone or tablet.

By playing AND singing while harmonizing, you learn to embody the notes. Eventually, this will help you harmonize by ear.

Let's look at a few ways you can practice:

Use an Easy Melody Line

Start with a melody line that you're familiar with. Then, play that melody on the piano while singing it. If you're uncomfortable playing an instrument, you can write out that melody using MIDI and a virtual keyboard in your preferred DAW and loop the melody.

While the notes in the melody change, try holding a harmony note along with it. As the melody moves along, the harmony note you're holding might continue working. It's up to you to pay close attention to how the combinations of notes blend or clash.

For example, if your melody and chosen harmony that you start with is a perfect fifth, there is no reason you need to maintain that perfect fifth interval as your melody moves along. In fact, doing so might sound extremely dull.

So instead, see how long you can hold that same note until the melody clashes with it. Then, once it does, ask yourself why . It's likely because you've landed on a chord tone in the melody that is dissonant compared to your chosen melody note.

To get a feel for creating your own harmonies, it's a good idea to experiment with note combinations. When a note clashes or sounds bad with another, try to move that harmony note around to determine where it works. When you find a note that works with the note in the melody, determine why it works by looking at the interval.

Listen To Some of Your Favorite Songs

One of the best ways people learn to harmonize by ear is listening to their favorite songs. Whether instrumental or vocal, most music has an existing melody. In your tracks, see if you can identify the melody and the harmonies that exist around it.

While you're listening, see if you can determine which intervals lie within the harmonies.

Do the harmonies blend nicely with the melody?

Are they tense or dissonant?

What are the combinations of notes?

Write the answers to these questions down and practice singing or playing along with the song. As you listen to different types of music, you'll notice that different genres employ harmonies much differently.

For example, a romantic 50s doo-wop song will make use of thirds and fifths, as these harmonies tend to blend more seamlessly with melodies in western music. On the other hand, a black metal band might choose to use more dissonant harmonies, such as minor seconds or augmented fourths/diminished fifths (tritones), to create a sense of tension, fear, or despair.

Of course, melodies aren't much if they don't have a chord progression beneath them. So when coming up with harmonies, not only do you have to find intervals that sound pleasing with the melody note, but you also have to make sure your harmonies are the right notes for the chord.

This is where practicing how to harmonize with chords can come in handy.

Let's use our example of C major again.

Let's say that the chord progression we're using is:

For simplicity's sake, let's say the chords switched every single bar and the melody only used chord tones in each chord.

As you can see, using C as a melodic note for the first chord (C major) would likely be a great choice, as it's the root of the chord. Plus, E is a major third away from C, while G is a perfect fifth away.

However, once we get to D minor, things might get a little wonky depending on the notes in the melody. For example, if the melody used F or A, C could work, as F is a perfect fourth away from C, while A is a minor sixth away. However, playing D, a major second away from C, could cause strange tension.

The same would go if we tried to play C over our G major chord. While C would likely sit nicely with G thanks to its perfect fifth relationship, it might not sit well with B due to its major seventh (or minor second in reverse) relationship.

Of course, this is a fundamental way of harmonizing chords, as a slight dissonance can sometimes be very pleasing. Dissonance is used all the time in jazz, and without it, many of our favorite jazz tunes would be quite boring. For example, jazz composers use seconds, sevenths, tritons, ninths, and elevenths all the time to create unique harmonies.

The point is that it depends on context, and context comes from the chords. So as you play chords and try to play or sing harmonies for those chords, you'll hear what gels and what doesn't.

While you don't have to go out and pay for expensive music lessons to learn how to harmonize, it is a good idea to practice basic ear training to get more comfortable singing and playing harmonies.

Ear training is the process of connecting notes, intervals, scales, chords, melodies, and harmonies with what we hear. Basically, when you study ear training, you build bridges between various musical structures.

We recommend downloading some ear training apps or software to start practicing. In turn, you'll gain a deeper understanding of music theory, and you'll gain the ability to hear harmony, allowing you to sing, play, compose, and improvise with ease.

There are massive sheet music libraries online, which can be very helpful when building an understanding of harmony. By reading sheet music from professional writers and composers, you can begin to visualize how they write harmony in their music.

You can see how melodies develop over chord progressions or how a specific chord tone is used atop a melody to add unique flavors.

How To Practice Singing Harmonies

To practice vocal harmony, you can practice harmonizing with recordings of yourself singing.

Start by recording a track of yourself singing a melody from one of your favorite popular songs. Then, while playing your recording back, see if you can harmonize with the melody. As you harmonize, make a note of any rough spots you run into, then ask, "why?"

You're probably singing an interval that doesn't quite fit with the given melody note, so it may be a good idea to switch it up and see what happens. The more and more you practice, the better your timing and pitch will become, and the easier it will be to harmonize by ear.

Final Thoughts - The Importance of Harmony in Music

Harmony is one of the single most important aspects of music. Whether you're creating chords or writing harmonic lines to sit atop your melodies, you're using harmony. Developing your harmonic skills can help you become a better composer, songwriter, singer, and instrumentalist.

Follow our steps above, and you'll be well on your way to becoming an expert in the world of musical harmony.