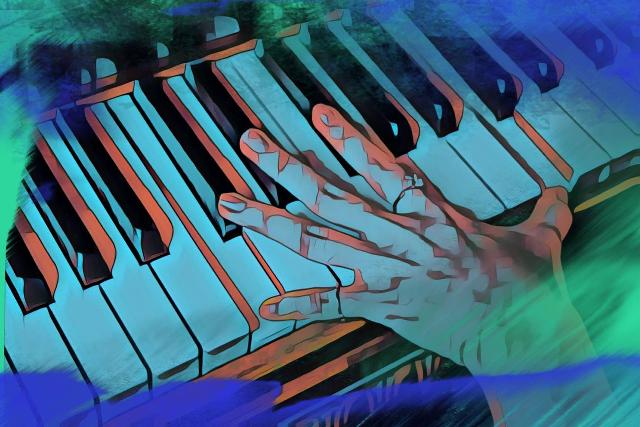 In music, there are two major tonalities to consider when it comes to describing chords. Tonality refers to a method of describing the overall sound in a piece of music. So when it comes to chords, we usually think of minor or major as the main descriptors for identifying tonality in a chord progression.

Major chords usually depict a "happier" sound which is commonly heard throughout rock and pop music. Minor chords, however, are a little more complex and come with more depth which usually translates to a sadder or darker sound.

This is because minor chords naturally create more feelings of dissonance or tension in the way that they are built. Major and minor chords can share the same scale notes, though the context will determine whether the chord is major or minor. In this case, a chord might be referred to as a major chord's relative minor.

For instance, the C major scale ( C D E F G A B ) shares the same notes as the A minor scale ( A B C D E F G ), just in a different order and context. This makes A minor C major's relative minor chord. You could also say that C Major is the relative major of A minor.

As you can see, these scales, despite being a major or minor key, showcase the same notes. The context of notes, or the order in which they're played, can totally define tonality.

What Are Minor Chord Progressions?

A chord progression is a group of multiple chords played in a specific order to evoke a certain feeling or mood. Just like notes, the context of chords matters. Chord progressions create different musical modes by emphasizing the relationship of notes throughout a key.

A chord degree simply refers to the order of chords in a progression. For instance, in A minor, the first chord is A minor, followed by the second chord B diminished. In E Minor, the first chord is E minor, followed by F# diminshed. Seem confusing? Don't worry! This pattern is a lot more straightforward than it seems, just note for now that chord progressions of any key go in a predictable order and are defined by the prominent chords of the minor key.

To build minor chord progressions, you'll have to be familiar with minor scales, since these note families are the building blocks of chords. Essentially, scales are collections of notes that hold certain relationships based on the key they're referring to.

However, the same scale can be translated across different keys. For instance, the C natural minor scale and G natural minor scale have different notes, but they both hold similar relationships between the notes because they were created utilizing the same type of scale. In this way, a scale is akin to a note formula or recipe.

Understanding these two terms is key to building any major, minor, pentatonic, whole tone, harmonic, or any other scale for that matter. Scales are formulas built in the language and framework of whole and half steps.

To illustrate the art of making scales, we'll be using the notes in the Key of A minor, which utilizes no sharps or flats, otherwise referred to as accidentals, making our job easy. For reference, the natural key of A minor is spelled out as A B C D E F G A B.

Here are the most common types of minor scales that you'll come across while building minor chord progressions:

The natural minor scale has half steps between scale degrees 2 and 3, and 5 and 6. For example, if we look at the key of A minor, there is a half step as opposed to a whole step between notes B C and E F. If we look to the piano, B and C, and E and F are directly adjacent reflecting this principle.

You can see the whole steps represented as "W" with "H" representing half steps.

To create a harmonic minor scale, the 7th note is augmented up an extra half step. In the key of A minor, this converts the G note to G#.

Find yourself getting lost? To sum up our findings thus far, a note makes up a scale or a collection of notes. These scales can be used to create chords, which can be reordered to create chord progressions.

In most cases, you'll be building minor chords using the natural minor scale, but it's worth understanding these variations throughout your career as a musician.

How do musicians analyze and notate different scales and chord progressions within a song? While you don't necessarily need to grasp this information to build minor chord progressions, it's worth recognizing that this is done through a process called Roman numeral analysis. Understanding Roman numeral analysis can take some practice, but doing so will help you quickly understand the universal language of music.

You can identify chords in a song by their roman numerals. This notation can help you determine which scale degrees are minor, major, diminished, or augmented within a minor chord progression.

On a natural minor scale, the Roman numeral analysis looks like this:

It can feel confusing to unlock these terms. After all, how could a major chord exist within a minor chord progression built off a minor scale? The answer lies in context. Major and minor chord progressions both share the same notes. It's the order that matters. That's why every major key has a relative minor, and every minor key has a relative major.

Roman numeral analysis can help you quickly read and understand chord charts and popular chord progressions that are often written out in this manner. If you ever find yourself lost, remember that lowercase numerals note a minor chord, uppercase a major, and this symbol (ᵒ) paired with a lowercase numeral shows a diminished chord.

While these relationships may seem confusing at first, the good news is that this formula is universal for any note. You can use this scale formula and relationship to create a set of minor chords with any tonic starting note.

Here are a couple of songs you might not have known are in a minor key:

Lady Gaga's breakout song is in the minor key of C#m:

"Hotel California" by The Eagles

This classic Eagles' song is in the key of B minor:

Rapper and producer Kanye West has produced many chart-topping hits in minor keys, including the breakthrough single "Stronger":

How To Write Music In A Minor Key In 6 Steps

Without further ado, here's how to write music with a minor chord progression in 6 simple steps. The same process can be used to write a song with any type of progression, so feel free to swap out chords as you see fit.

To start, you have to find your key. You can build minor chord progressions from any key, but it might be easiest to start with A minor since this key has no sharps or flats. Alternatively, you might want to listen to songs in different keys and select your starting point based on your vocal range. Find a key in which you feel comfortable expressing yourself.

Once you've built your minor scale, you can now write out your minor chords of the scale. To build basic chords, all you need is three or more notes stacked on top of one another in minor thirds.

For example, if we take the A minor natural scale, we can build A minor with the notes A, C, and E. Between each note is a minor third or three half steps. Major chords have four half steps between notes. To create G major, we would start with G, move up four half steps to get B, and four more to get D creating the chord triad G B D.

Using this formula, you can create minor chords for every scale degree. In A minor, chords according to their scale degree would look like this:

Now that you've written out your chords for a specific key, it's time to create a progression! You can come up with your own combination of chords, or experiment with some of the popular chord progressions listed below.

While it's a good exercise to write out your chords so that you can understand the relationship between notes in the context of theory, you can also use a handy dandy chord sheet or chart like the one listed below to help you speed up your process of building chords in the key of your choosing.

5. Test Your Progressions With Your Melody And Other Instrumentation

Chord progressions are crucial to making music, but they are just one component of modern song-making. Once you have a chord progression you want to try out, start layering it with your voice or other instrumentation like a guitar or piano melody.

You'll want to make sure that your melody fits within your chord progression. To do this, simply utilize notes within your key and scale in the song! Before you know it, you'll be able to write an entire song just by using three or four chords and a strong musical melody.

Once you've built a chord progression and melody you're happy with, you can start to branch out by adding 7th or even 9th notes to your foundation chord triads to add some more depth. You can also create more complicated progressions that aren't just the same batch of chords repeated over and over.

Try using different chords during different sections of your song. Add in an extra chord, or hang on a chord longer for parts where your music needs extra emphasis. Now that you understand the basics, experiment with added notes to really make your chord progressions shine.

This classic progression is seen in many songs, including "Ain't No Sunshine" by Bill Withers:

The song is in the natural A minor key. It starts on an A minor chord, moving to E minor and D minor. This progression creates a sense of resolution and tension, giving it a mysterious, compelling aura.

This popular chord progression blends major and minor chords to create a compelling progression. Its seen all throughout pop music, but you can hear it through Gotye's "Somebody That I Used To Know" with Am, F, and G.

This is the classic minor progression associated with 12 bar blues. A great example of a modern song utilizing 12 bar blues can be found in The White Stripes' "Ball and Biscuit":

This progression swaps out the classic minor five chord and replaces it with a major V7 chord to give a jazzier, more complex feel. You can here this chord progression in TLC's classic, "No Scrubs":

This jam also takes the 4 chord and adds a 7th. The progression moves from D minor, to A minor seventh, to E major seven, landing back on D minor.

This progression is very similar to the first minor chord progression, though the v vi order is switched. With these three chords, you can make a wide variety of songs. Here's a video demonstrating just a few tunes you can play on the guitar with these minor chords.

This progressions, and variations of it with substitue chords are fairly common in popular music. You can hear it directly in Green Day's "21 Guns":

Hopefully, this guide makes it easier for you to craft your own minor chord progressions for your music. The good news is that chords are universal, so whether your play guitar, piano, or just want to find a minor backing track for your voice, any minor chords will sound the same.

Have fun using minor chord progressions to make your music!