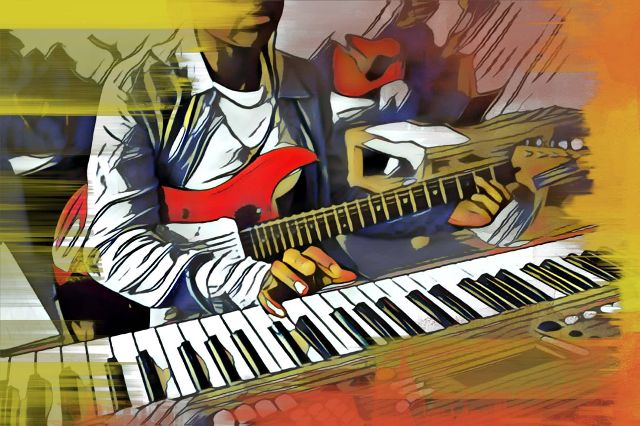 Chords are the building blocks of music. Without chord progressions, our favorite songs, old and new, simply wouldn't exist. Hence, understanding the different types of chords is a key skill for a musician. Whether you're a guitarist or singer, knowing this music theory is bound to serve you throughout your career.

Below, we'll share a definitive guide to chord types so that you can build a major chord, minor chord, diminished chord, and augmented chord with ease. Let's jump into it!

In its simplest form, a collection of multiple notes played simultaneously. These notes reside within an identifiable key, or family of notes, which helps musicians understand the context of any particular chord progression. There are several basic chord types like major chords along with less common chord types like extended chords, all of which we will cover below.

As a starting point, note that chords can be identified by how many notes are in each group of notes:

Dyads, sometimes called intervals, are chords that are composed of just two notes. These types of chords will usually include the root note and third of a key since these notes help define the key, but more on that later. For example, a C major chord as a dyad could be C E. A C minor chord as a dyad would be C Eb.

This is the most common chord structure that contains three notes, most commonly the root note, third, and fifth or dominant of the key. If we look at a c major chord, we will find a triad of C E and G. A C minor chord consists of C Eb and G. As you'll note the major triad and minor triad differ because of the third note in the C major scale, which is E in this case.

How Are Chords Made?

Chords are built off of scales which are collections of notes.

The tone refers to the sorts of feelings a chord evokes in a listener. When we look at the two major chord types, major and minor, there are significant differences in tone. Major chords tend to take on a happier sound while minor chords sound sadder, or at the very least, more mysterious.

Intervals refer to the relationships between certain notes. Within a key, there are certain scale degrees that stand out amongst the rest.

Dissonance describes the tension between certain sounds. Chords can create tension using the context of the order of notes. For instance, a chord progression usually ends by dissipating the tension, creating a satisfying sonic experience.

Resolution is the opposite of dissonance and refers to emphasizing the critical notes of a key, like the dominant or the tonic. You'll typically hear chord progressions resolve either at the end or the beginning of a progression.

The context within a chord progression can help emphasize the power of chords since it showcases the relationship between notes. Therefore, the order of chords can change the way that they are sonically perceived.

How To Write Chords

So, how does one read or notate chords? Here are the most common methods for communicating chords in the world of music.

Chord symbols are universal and help musicians quickly decode chords. For instance, a C major seventh chord can be abbreviated to Cmaj7. A C minor seventh chord could be notated as Cmin7. In addition to abbreviating minor and major, you'll see augmented chords abbreviated to "aug". Diminished chords have an upper righthand circle. A C major diminished chord would be written as C°.

Chords can be written out on sheet music like any other collection of notes. These stacks are altered based on the key signature of the piece. Sheet music in this way can be somewhat difficult to read, but it can be helpful to understand the relationships between notes in a chord progression.

Roman numerals are the most universal form of chord notation, with each chord number corresponding with its scale degree. Understanding this system makes it easier for you to read chord progressions and remember the relationship between each chord. Chords with the major scale are written out and identified as such with roman numerals:

As you'll learn when you write a chord progression , you will often focus on the tonic, subdominant, and dominant scale degrees since these emphasize the root note of a scale, helping establish the key of a song.

Nashville numbers are fairly similar to the Roman Numeral system, except the chords written are simplified to modern numbers. So, a I IV V chord progression is written as "1 4 5". Seventh chords are notated with a superscript 7 attached to the chord.

How To Build Chords

You can build any chord with a couple of simple steps. To start, you'll want to select a key that resonates with the type of chord quality you're looking for. For a happier sound, you'll want to opt for a major scale, for a sadder or more mysterious sound, go for a minor scale. Pick a scale centered on notes within your range as a musician.

Let's work with one of the easiest keys, C Major for this example. If you spell out the key of C major, you'll get the notes C D E F G A B. If we use this key's relative minor, or A minor, the minor scale would be written out as A B C D E F G A B. As you'll note, these scales both use the same exact notes, but because they are played out in a different order, they are categorized as separate scales. In music, context matters.

Once you've written out your desired scale, it's time to create a chord for each scale degree. To build basic triads, you take the first or root note of the chord, add a major or minor third (depending on the key), and the fifth.

So the first chord in the key of C major is C E G. In A minor, the first chord is A C E. Using the same notes from your key, you can spell out the remaining chords. You can also use a chord chart to speed up the process. For instance, here's a cheat sheet for chords generated using the major scale:

As you'll notice, just because chords are written from a major scale, doesn't mean all scale degrees are in major. Confusing right? An easy way to think about it is that chords are built using the notes from the parent scale, but the individual chords are named based on the interval relationships established from notes.

The 4 Main Types of Chords

Now that we understand how to read chords, let's identify the main types of chords. While major and minor chords are the most common, you'll see these four chord types when working with any scale.

Major chords are the bedrock of popular music for their simple, sonically-pleasing sound. These chords are built from the major scale and tend to have a happier sound. They are expressed with uppercase Roman numerals. The difference between major chords and minor chords is that they use a major third instead of a minor third.

Minor chords are created using a minor scale formula. These chords tend to have a sadder, more mysterious sound and are represented with lowercase Roman numerals. Minor triads use a minor third instead of a major third.

A diminished chord is a minor chord with a flattened fifth or a minor chord that has the 5th knocked down one semitone. If we want to make the chord A minor diminished, we would take the minor triad A C E and flatten the 5th, which in this case is E. Therefore, an A diminished chord, or A dim for short can be written as A C Eb.

Augmented chords are in some ways the inverse of diminished chords. To create an augmented chord, you take a major chord and sharpen the 5th. Let's take the C major chord for example, which is C E G. The fifth from C E G is G, so C aug would be C E G#.

Other Types of Chords

In addition to major, minor, augmented, and diminished chords, there are five other types of chords worth understanding as they end up coming up fairly often.

Seventh chords are one of the most common tetrads in music. To make a 7th chord, you simply add a major or minor seventh to your base note. To make a C major chord a seventh chord, you would take the base triad of C E G and add the seventh note to create C E G B.

The process with C minor is similar. A C minor chord to a C minor seventh chord would transform from C Eb G to C Eb G Bb. Each seventh chord derives its additional note from its parent scale.

Dominant seventh chords are a special type of seventh chord that blend the worlds of major and minor for a strong, tension-filled chord you'll commonly hear in jazz music. This chord takes a major seventh chord and flattens the seventh. So, Cmaj7, which is C E G B becomes C E G Bb as a dominant 7th. It is written as C dom 7.

As you'll note, most triads are built with the root note, third, and fifth. A suspended chord takes a major triad and alters it by going up or down a whole step. You can also think of it as a major triad with a minor second instead of a 3rd, or a perfect 4th instead of a major 3rd. The classic C E and G triad turn to C D G in Csus2. Furthermore, Csus4 converts C E and G to C F G.

Extended chords refer to adding notes that extend past the 7th scale degree (or the first octave of the scale). If we look at the C major scale, C D E G A B, we can continue to extend it -- C D E F G B C D E F... Though the two Cs or any duplicated notes are the same tones, they are an octave apart. A Cmaj9 chord would be a c major triad plus the 9th which if we count using our scale, is the D an octave up. So, a Cmaj9 chord is C E G D.

Altered chords refer to any chord that has strayed from the typical formula that doesn't fall into one of the major categories. Any note within a chord can be altered outside of the fifth and any extended chords. For instance, the altered chord CMaj7#5 would equate to a C major 7 chord with a sharpened 5th, otherwise spelled as C E G# B.

To truly understand chord progressions, check out our complete guide here , but we'll shed light on the basics so that you can effectively use your favorite chords in context. A chord progression is a collection of chords built off of patterns of intervals.

As established, intervals play off of the innate sonic relationships between notes within a key. For this reason, chord progressions utilize the same or similar patterns over and over again throughout history. There are just some chords that tend to elicit a more harmonic or sonically pleasing response.

Chord progressions are most commonly written out using roman numerals, which denotes the chord degree. For instance, in the key of C major, a C major chord (or the first chord of the established key) would be written out as I.

Most chord progressions in modern western music contain I, IV, and V chord degrees since these progressions create little dissonance and naturally transition to each other based on their composition.

Just look at how many famous songs you can enjoy with JUST four chords!