Verse vs. Chorus: All the Differences You Need to Know 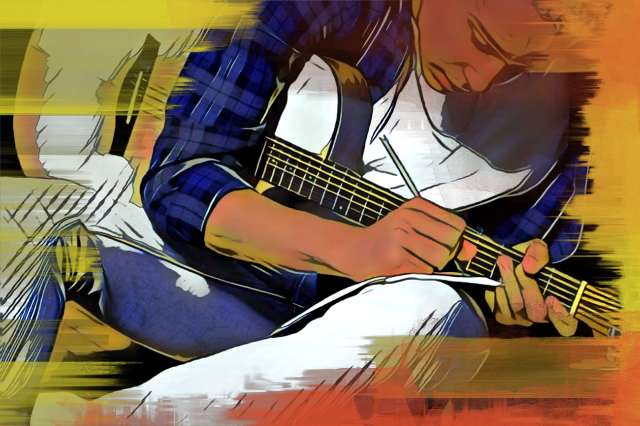 Two of the most important song elements are the verse and the chorus. Both the verse and chorus add value to a track's lyrical and sonic structure and are poised to connect deeply with listeners. These musical structure tools are both essential, though they're different in practice.

Below, we'll detail the key distinctions between the verse and chorus so that you can successfully incorporate these melodic elements into your songs. Let's jump in!

What Is A Verse?

To start, let's define a verse . Essentially, verses occupy the "meat and potatoes", so to speak, of any given song. These are usually the longest song sections and give the songwriter the opportunity to add depth and progression to the narrative of their song.

The verse is lyrically focused and usually contains some sort of repeating rhyme scheme and chord progression . While there may be a few repeated phrases throughout a song's verses, they are more or less lyrically unique throughout.

You can find plenty of great examples of verses throughout popular music. One notable instance is the revamp of Taylor Swift's "All Too Well" which was released this year:

While most modern pop songs won't extend far past 4 minutes, this track is primarily composed of verse after verse after verse with one verse telling a completely different story from another. Note how as the track moves from the first verse to the second verse and so on, you learn more about the narrator's relationship through the lyrics.

The main story of a song is told in the verse, though it's not necessarily the most important songwriting element. In a pop song , you'll typically find two verses sandwiched in between two choruses, or a verse chorus bridge-like progression.

What Is A Chorus?

A chorus is one of the strongest parts of a song that revolves around the same lyrics and repeated melody . This short, catchy section is designed to stick with the listener long after they've heard a tune, and it's usually the section you think of when referring back to a song.

Though chorus sections are short, they are often incredibly difficult to master throughout the songwriting process. Chorus sections are usually contrasted against the rest of a track with elements like a key change, a shift in the chord progression, melody, or rhythmic phrasing.

From jazz music to punk rock, most great songs contain a strong chorus. Even hip hop, which isn't melodically focused, can introduce catchy melodies during a chorus of a song to draw in a listener. Just listen to the chorus in Biggie Smalls' "Hypnotize Me":

In order to properly understand the role of the verse and chorus, it's essential to have a foundational understanding of basic song structure. There are endless ways to structure your song, but you're most likely to come across verse-chorus form or verse-chorus bridge formations as discussed below.

Both of these song types include the verse and chorus, but they also may contain elements like the bridge or pre-chorus. In a song, a bridge is a section that provides something lyrically or melodically different from the rest of the track, drawing attention to itself through contrast. A pre-chorus simply refers to a section after a verse leading up to the chorus. With these terms out of the way, here's what you might expect in terms of structure:

This short but sweet pattern is seen all throughout musical genres and consists of a repeated chorus and two or more varying verses.

Other subtypes include AABA form which revolves around the chorus for the most part:

The verse-chorus bridge is similar to the former song structure, except it may include additional elements like a pre-chorus or bridge. The bridge serves to add more contrast throughout a piece of music and can be a helpful songwriting tool for creating tension in your tracks.

A common example of this song structure looks like this:

This structure can also be expanded upon to produce:

Note that the above structures aren't the only way to build out your songs . There aren't any set-in-stone rules when it comes to songwriting, these structure examples can merely serve as an inspiration of tried and turn paths for building out your next banger.

Key Differences Between Verse and Chorus

There's no debating that the verse and chorus are both essential songwriting tools . That being said, understanding the differences between these two elements can further your music education and make it easier for you to craft more informed and thoughtful songs. Here are some of the key differences between the verse and the chorus to take stock of.

The Chorus Shares The Main Idea And The Verse Gives The Backstory.

The chorus is often the most memorable section in a piece of music and is in practice, fairly short. The chorus of a track may also contain the title of the track or the main hook of the song . On the other hand, the verse builds the tension to create more of a payoff in the chorus. It also provides context for the full song. You can kind of think of verses as chapters in a story, whereas the chorus may act as the climax in that story.

The Chorus Is Designed To Stick With The Listener and Often Contains A Hook.

The main purpose of the chorus is to be memorable. On the other hand, a verse is primarily designed to advance the story of a song. Hence, choruses are usually shorter, catchier, and melodically interesting. Verses usually stay more or less the same throughout, with the exception of the lyrics. Having these different types of song elements throughout a track makes it easier to draw in a wide selection of listeners.

The Verse Is Longer Than The Chorus.

Naturally, the verse is longer than the chorus since it's building necessary tension throughout a track. The chorus shines by being short and sweet, whereas the verse makes its mark by having long, thoughtful lyrics that can connect on a deeper level with a listener. You might be drawn to a song due to its catchy chorus, but you'll stay for the vulnerability of the verse.

They Use Different Lyrics.

One of the biggest distinctions between chorus and verse is that the verse utilizes primarily different lyrics, whereas a chorus will repeat lyrics with the same melody and rhythmic structure as showcased throughout the rest of the song. A chorus can utilize the same lyrics without creating fatigue due to other interesting elements like a catchy melody, rhythm , or punchline.

While a verse is typically lyrically heavy and played out one the same music or chords, the chorus is a lot more flexible. It could consist of a short hook or catchy lyrical phrase, but it could also contain a guitar solo, or simply some scatting, like in a jazz song. Choruses don't necessarily have to have lyrics. They just need to stick in your head by using rhythm, melody, and repetition to capture your ears.

Similarities of Verse And Chorus

The chorus and verse are different in a lot of ways, but there are also a lot of similarities between the two parts. It makes sense to note the similarities of choruses and verses so that you're able to build songs with different yet cohesive sections.

They're Both Important Parts of A Song's Basic Structure.

The two sections are equally important since they both serve the overall goal of a song. While a chorus may be more memorable, a verse tells more of a song's story, setting up the payoff for the catchy chorus. A verse and chorus can connect deeply with a listener and work in tandem to create a strong piece of music.

They Both Incorporate Rhyme.

One of the best ways to make a song memorable is to incorporate rhyme. Fortunately, both the chorus and verse utilize a strong rhyme scheme in order to maximize a listener's retention of a song.

The Verse And Chorus Help The Listener Attach To A Song.

Every songwriter knows that the chorus and verse are essential. These parts may be different, but at the same time, they both serve the main story of the song in collaboration with one another.

As you can see, the chorus and verse are both essential to a successful song even though they have their fair share of differences. Hopefully, this guide makes it easier for you to decode these essential songwriting tools so that you can start crafting better songs. Enjoy writing tracks with a memorable verse and chorus!