What Is a Verse In a Song? 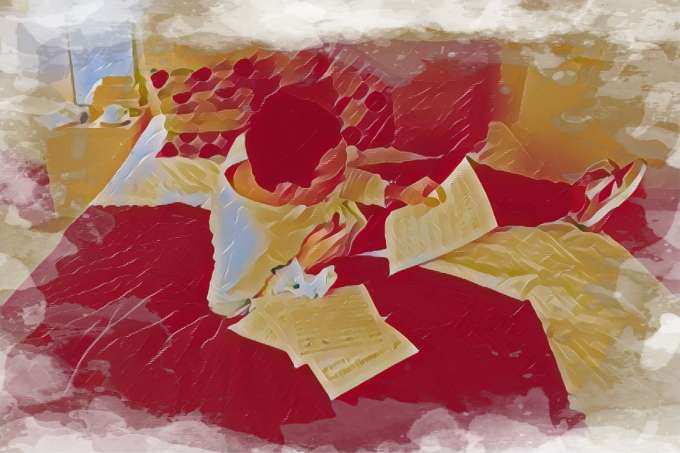 Great songs tell stories. Song verses serve as the meat of a song, opening up a basic song pattern and carrying the listener from one chorus to the next . But what is a verse in a song? And how can you identify it within a song structure?

Below, we'll cover all of this and more so that you can understand how a verse works and where you can find it. We'll also share a couple of excellent verse examples that effortlessly capture a listener's attention. Let's dive into it!

What Is A Verse In A Song?

If a song was a story, you can think of the verses as the different chapters. This is because a verse in a song contains most of the lyrics, and therefore, most of the emotional arch behind a composition. Verses contain the main idea behind a track's basic chords, usually carrying the same harmonic structure from one verse to the next.

Multiple verses are common within songs, but in most popular music, there are about two or three verse sections. However, there aren't any set-in-stone rules: Great songs can have shorter verses or less of them, and others can become classics with longer verses (think "American Pie" by Don Mclean).

Unlike the chorus which is designed to prioritize catchiness, a song verse contains plenty of different lyrics to push forward the narrative of a track within the confines of a similar musical structure. Verses usually carry the same melody throughout so that they don't detract from the power of varying lyrics.

When it comes to determining how many verses you need, or how long a verse should be, you can typically count on verses in even pairs. For instance, a verse could be eight lines, it could be four lines, or you might have two or four verses within a song. This is because verses often incorporate rhyme schemes, which can be easier to achieve when each section is a similar length.

In short, you can think of the verses of a song as the body of the track. These sections are built upon song lyric after lyric, typically over the same chord progression .

How Is a Verse Used In A Song?

A verse is a storytelling tool in music. While the form of verses can be fairly varied, they all typically share a set of common characteristics in music:

The Functions of The Verse In A Song

In order to understand the function of a song verse, it's important to understand all elements of basic song structure. Here are some of the key components of most hit songs that can help showcase the importance of a song's verse.

As discussed, the verse is the most time-consuming section of a song that holds plenty of lyric lines and the story of a song.

A pre-chorus is the section between a verse and a chorus, usually with a unique melodic structure to effortlessly flow into the chorus.

This is the catchy refrain of a song, showcasing a hook and oftentimes, repeated phrases.

There is usually only one bridge in a song , if any. A transitional bridge usually brings a song to the last verse or chorus and introduces new lyrical or melodic ideas that weren't expressed earlier in the track.

Verse chorus form simply refers to a song's traditional song structure of intro, verse, chorus, verse, chorus, bridge, chorus. A verse is designed to uplift the chorus and set up the story to support the main ideas of any particular composition.

You'll see the verse-chorus form across all genres of music. However, there are certainly exceptions to this adage. As discussed below, Queen's "Bohemian Rhapsody" doesn't appear to have a chorus whatsoever, and relies solely on strong verses.

How To Identify The Verse In A Song or Poem

When seeking out the verse of a song, you'll typically want to look for a couple of common visual cues. For one thing, verses aren't usually repeated with the same lyrics as a full chorus may be. However, they may hold a repetitive pattern in terms of cadence and utilize the same melody to hold the same overall theme throughout. Let's take a look at the first verse from the popular song, "Someone Like You" by Adele:

"I heard that you're settled down

That you found a girl and you're married now

I heard that your dreams came true

Guess she gave you things, I didn't give to you

Old friend, why are you so shy?

Ain't like you to hold back or hide from the light

I hate to turn up out of the blue, uninvited

I had hoped you'd see my face

And that you'd be reminded that for me, it isn't over

I wish nothing but the best for you, too

I remember you said

If you've ever heard the song, you'll notice that the primary difference between the chorus and verse is the melody and varied lyrics of the verse. While the chorus (" Never mind...sometimes it hurts instead" ) is extremely catchy, you get most of the story in the opening verse of the song.

In order to identify verses in songs or poems, it can be helpful to look at the longest sections first or determine where the chorus lies. Usually, there are verses are before and after the first chorus in a piece of music.

There are several great examples of effective verses in popular music. Here are just a few that you may recognize.

One of the best examples of strong verses in rock music is in the iconic "Bohemian Rhapsody". While this song doesn't take on the traditional verse structure, it showcases how important a song's story and the harmonic pattern is to a track.

The song actually doesn't have an established chorus, rather four strong verses each with a new harmonic pattern to keep the listener engaged. While this unique structure won't work with every track, you can't talk about verses without acknowledging the cultural impact of this song alone:

"All Too Well" - Taylor Swift

Another excellent example of a strong verse in a song can be found in Taylor Swift's "All too well". In this track, the song's chorus and verses are arguably just as memorable -- so much so, that Taylor recently released a new verse with additional verses to add to the song's story.

This new version of "All too well" broke records for the longest song to top the Billboard charts. However, it's important to note that the first verse, subsequent verse, and added verses didn't exactly incorporate new melodies: Just strong, different lyrics that carry you through an emotional journey as you listen over the repeated verse chords.

This just goes to show that there is no optional section length for a verse -- While many songs will have shorter verses in most music, if the verses are compelling enough, they can take hold of listeners, even when utilizing the same melody.

Are you still finding it challenging to understand the overall structure and purpose of a song's verse? Here are a couple of frequently asked questions and answers to help expand your understanding.

How many lines are in a verse of a song?

In most pop music, verses end up being 8 or 16 bars long . That being said, there’s no set-in-stone rule about how long or short a verse needs to be. Verses are typically longer than the chorus of a composition.

How long is a verse?

A verse can be as long or as short as you need it to be. That being said, verses usually have an even number of lines since they typically embed some form of rhyme structure. The verses of a song typically take up the most time relative to the rest of the song.

A verse can be 4 lines! Traditionally, a verse might be longer, but there’s no rule regarding the right way to craft a verse. Your verse may be 4 lines, it may be 8, it may be 16. As long as it's thoughtfully constructed, the length doesn’t matter.

What is the difference between a verse and a bridge?

A bridge introduces a new lyrical or melodic concept that was not previously showcased in a verse or chorus. Verses, on the other hand, usually have a similar melodic structure to each other. The bridge is usually standalone in terms of melodic structure and doesn’t repeat itself.

Can a song have 4 verses?

A song can have 4 verses. It can also have 2 or 1! It all depends on the needs of any particular track. A verse is designed to tell the story of a song, so it makes sense that there isn’t necessarily a set length for these song sections.

Does a simple verse form have a chorus?

A simple verse is designed to be just a verse, without any chorus or hook . That being said, there may be repeated lyrics or melodic ideas within one verse. However, a simple verse is separated from the chorus section in most compositions.

The verse-chorus term was identified by Jay Summach, which is defined as a verse and chorus utilizing the same melodic structure. You can find this structure all throughout modern music. A verse-chorus form makes a song fairly easy to remember and sing.

Practically all genres of music utilize verse-chorus form due to its catchy and memorable nature. That being said, it can be found most often in pop music since this simplistic structure helps create total earworms. For instance, “Smells like Teen Spirit” uses this famous structure.

What makes a good verse?

A good verse tells a story of a song while being catchy, memorable, and well rounded. Great verses flow easily into the chorus and into other sections of a song all while shaping the arc or a composition. A strong verse can make or break a song.

It's clear that effective verses can easily make or break a song. After all, they carry the main story of most songs, so the verse plays a huge role in connecting with listeners. Hopefully, you're one step close to understanding the importance of a verse in a song. Enjoy writing great verses for your compositions!