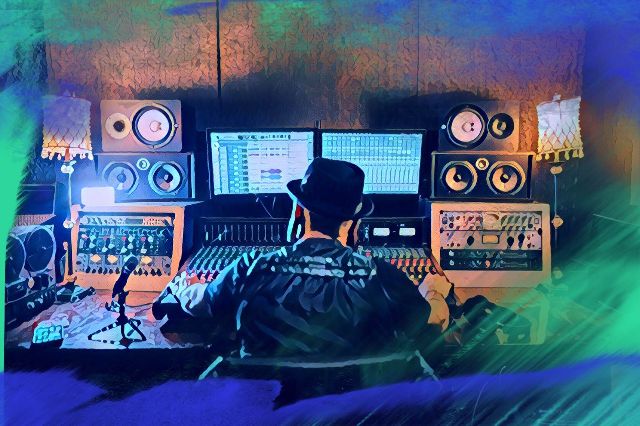 If you're a rap artist or hip hop producer, knowing how to mix your music effectively is key to creating impactful songs. But how does one create a hip hop mix? What makes mixing hip hop different than mixing other genres of music?

What Is Hip Hop?

Before diving into the mix specifics, it's important to define exactly what we mean by hip hop. Colloquially, this genre identifier could refer to a wide variety of songs. Historically, hip hop defines a culture that contains four elements: MCing, graffiti, dance, and deejaying.

When people refer to hip hop music, it's oftentimes reduced to music that contains rap as a form of delivering a vocal, but a hip hop track can't be defined by a single sound.

Whereas today, the genre of "hip hop" music is heavily varied. Take a listen to this song by EARTHGANG, JID, and J.Cole:

Denzel Curry, who exhibits a trap-influenced sound in his song X-Wing :

And Griselda who maintains a more classic sound:

As you'll hear, sound varies greatly within the hip hop genre. That being said, when it comes to hip hop mixing, we can count on a couple of similarities: 1) Lyrically, vocally driven music 2) Strong beats and basslines 3) Nuanced production with inventive use of sampling, distortion, chopping, and other elements.

After you've produced your hip hop song, it's time to move on to mixing your track. Here are some hip hop mixing techniques you'll want to use to prepare your mix towards the tail end of the music production process:

Gain is the input level of audio signal before undergoing additional processing. When mixing, it's key to remember that you don't want your mix to be too loud so that there's room (called headroom) for mastering services.

Mastering is all about compressing a mix to amplify the overall volume and cohesion of a track. If you master a mix that's too loud, when you apply the additional compression during the mastering process, clipping occurs, creating unwanted distortion and overall, an unpleasant mix.

Remember that typically, you want your overall mix to peak at around -6dB before moving to the mastering stage.

Hip hop and related sub genres often have an emphasis on strong bass or sounds in the lower frequency registers. Since low frequencies tend to take up a lot of space across the audio spectrum, it's essential that all parts of your hip hop song have a clear purpose in your mix. If you're not sure a part is adding value to your song, cut it out to make more space for the bass.

Even if you're mixing your own rap or hip hop song, stay organized. Label your tracks accordingly and group based on instrument type for a cleaner mix. In any case, it's good practice for the future, as any professional collaboration will expect this level of professionalism.

Don't shy away from utilizing automation with your DAW's stock features or different plugins, especially when making a hip hop or rap song that tends to have a more repetitive beat. Keep things interesting for your listener by making subtle though noticeable changes to the same elements.

How To Mix A Hip-Hop Song

Ready to start mixing your hip hop or rap? Here are some key points to consider while engineering:

Rap and hip hop mix is a vocally focused genre. In most cases, your vocal tracks will be the centerpiece of your creation. You'll want to conduct basic processing by cutting out harsh sibilance with a de-esser, using a compressor to glue your vocals together and add color your vocals.

It's a good idea to EQ out some of the unnecessary low end frequencies to create space for the bass, but make sure your vocals have plenty of room to occupy the mid-range of your frequency spectrum as a whole when evaluating your song holistically with a frequency spectrum analyzer.

The beat needs to hit hard in a hip hop or rap song, but it's also important that your kick drum or any other low end frequency sounds don't interfere with your bass. For instance, you might consider sidechaining your bass to the kick, allowing the kick hits to have their own impact while ducking to the bass as and when needed.

Consider spicing up your drum patterns with 808s, hi hats, and other flairs to add interest over the course of a song. Rhythm components are essential to any strong hip hop record - make sure your vocal, drum, and bass tracks all come together to create a cohesive, driving beat.

The bass is a key component that holds together certain rap sub genres and many other genres. Generally speaking, your bass should hold a strong presence, but it's easy for low frequencies to overpower a mix.

It might be best to "split the bass" - Take your bass track and split it into two separate sounds: the original bass and a separate, pure sine wave. Everything below about 90 HZ should be on the sine wave track, while the rest attributed to the original bass.

This will help you avoid unnecessary mud in the track, helping your kick, snare and other elements that may overlap similar low frequencies hit hard.

Beats in hip hop or rap songs often repeat themselves, since most of the focus is driven by the lyrical content and flow. However, you can keep a listener engaged by taking the time to add some creative flourishes.

For instance, creating simple vocal delay throws before hitting a chorus or verse can help create a strong transition while filling up the empty space of a track:

It's also very true to form to incorporate samples throughout your mix if you haven't already throughout the production process, but make sure they are cleared or royalty-free. Inserting an impactful sample or fill at the end of four bars can be just enough ear candy to keep your listener hooked.

You can create the popular stutter edit effect using plug ins, or by manually chopping up tiny sections of your sample:

Your overall mix sound should have a forward vocal, strong low frequencies, and a beat that's undeniable. The best way to create a strong hip hop mix with so much differentiation across the genre is to reference a song you admire. Listen to the differences between your reference track and current mix and adjust accordingly.

Don't forget that a song isn't complete, even after hashing out your final mixes. Once you've finished your mix, provided -6dB of headroom, move on to a quality master (start the mastering process here ) to prepare your songs for professional release.

Still having trouble mixing rap or hip hop? Check out these commonly asked questions and answers to help you expand your understanding as a budding mix engineer:

What is mixing in hip-hop?

Mixing is the process of balancing tracks in order to create a more cohesive track, ready for mastering services before being formally released to the world. It's the next step in the music production process after building the initial beat and recording rap vocals.

How loud should rap be in mix?

Rap vocals are arguably the most important element of hip hop songs or rap songs. While the rap vocal track shouldn't feel imbalanced with the beat, the lead vocal needs to be clear and forward whenever you're mixing hip hop sounds.

Is it hard to mix hip-hop?

As mix engineers will tell you, mixing any genre of music takes plenty of practice and dedication to cultivate a skillset. Mixing hip hop vocals and music is attainable for any producer or engineer so long as you put in the necessary work into cultivating your craft.

How do you mix and master a rap song?

Mixing and mastering a rap song isn't drastically unlike mixing pop music, or another adjacent genre. The key points to consider are that hip hop and rap music often lean towards vocal emphasis, a strong beat, and standout bass or low-end sounds which should be reflected in the final polished sound.

Hip hop mixing doesn't have to be complicated. Hopefully, this guide teaches that in order to mix hip hop, you simply have to pay extra attention to those special elements that define the genre. Have fun making your beats hit hard!