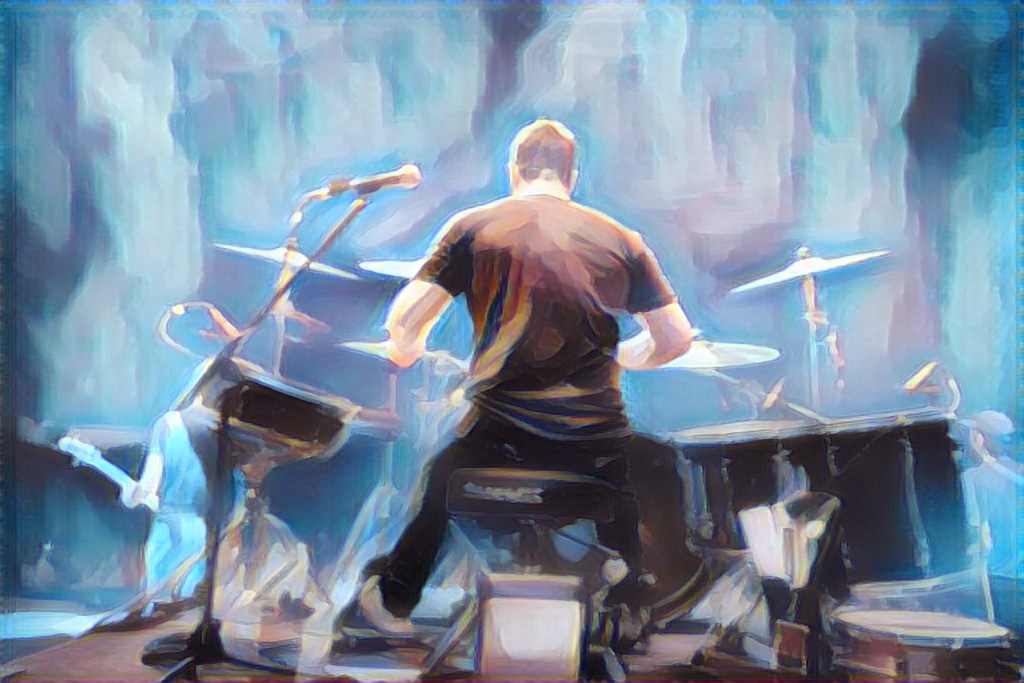 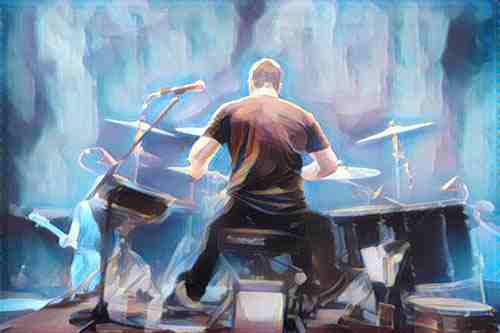 Drum beats make up the foundation of many different styles of music. Rhythm can say a lot about music’s culture and emotion and is often a particular musical style’s defining quality. With so many different styles out there, it can be challenging to find the right kind of drum pattern for what you’re trying to produce. This list includes some of the most elementary drum beats in modern music (including one that you may not know by name but will more than likely recognize once you hear it). With maybe a couple of exceptions, these drum patterns can be played with some variation, as musical styles sometimes (if not often) break their own rules. But the beats and their names should give you a sense of what to look for when trying to find the right rhythm and feel for the music you want to create.

A staple of modern popular music with countless variations, this beat is typically measured in common (4/4) time with characteristic onbeats (1 and 3) and backbeats (2 and 4). The rock/pop beat can be played with different subdivisions and at a wide variety of tempos. But for the most part, it’s based on a simple kick-snare pattern combined with a straightforward and repetitive cymbal beat.

House (Four On The Floor)

This beat is highly influential in electronic dance music and is generally even more straightforward than rock/pop. It’s sometimes called “four on the floor” because it’s based on a pattern of steady quarter notes on the bass, with other more subtle instruments adding syncopation over them, with emphasis on the quarter notes to get people moving on the dance floor.

This popular beat is the product of a hip-hop style that originated in the American south. It often features deep artificial bass with an electronic snare drum and distinctive, intricate cymbal patterns that vary between tuplets and regular notes, lending a tension/release feel to the rhythm. Because trap lyrics and imagery commonly employ harsh themes, trap drum beats are often aided by very dark and atmospheric production and effects but with clean and clearly articulated staccato notes.

Like the trap beat, dubstep is characterized by tuplets. Except, in this case, the tuplets are mostly left to the other instruments (particularly the wobbly bass synth), while the drum patterns are a bit more regular. Nevertheless, dubstep rhythm is no less intricate and employs just as much (if not more) synthesized drum sounds and effects as other electronic and hip hop derived styles. Possibly the most notable quality of dubstep beats is the heavy attack on the onbeats and backbeats, which help give it its aggressive sound.

2-step is a subcategory of UK garage, a type of electronic dance music that originated in England during the 1990s. What makes 2-step unique is mostly its syncopated bass beat instead of the constant four-on-the-floor pulse of many other dance music types. Although it’s a common-time beat at its core, 2-step is often considered somewhat rhythmically chaotic and unpredictable.

The swing beat is the foundation of most jazz as well as big band music. The basic underlying rhythmic pattern is typically played on a standard drum kit cymbal, like a ride or hi-hat. It’s characterized by the irregular manner in which its beats are subdivided. Normal rhythm generally involves equidistant beat and rest divisions and subdivisions that conform with established meter and timing. But swung music features isolated tuplets near regular notes, subtly lending a brief but repetitive dragging and rushing (or vice versa) feeling to what might otherwise seem like regularly paced notes.

Funk is a broad category of music encompassing several subcategories (like gogo and boogie) and is often fused with other styles. It originated in the 1960s among several different genres that were challenging the simple and often confining pop music conventions of the era. Funk’s identity is rooted in its rhythm, which alternately emphasizes onbeats and offbeats to constantly shift its foundation in a way that seems designed to get people to dance. It’s often played in half time, and it frequently uses intricate hi-hat or ride patterns to make it even more compelling.

Like house and other forms of dance music, disco often features a four-on-the-floor beat. In this case, those quarter notes usually sync with the bass guitar line. But a defining component of disco rhythm is its syncopation, with regularly accented offbeats (on drums and bass guitar) that give it a kind of bouncy quality. Like much of American dance music, Latin musical elements frequently appear in disco.

Ska is a very formative style of Jamaican music that (like funk) has been fused with other genres throughout the years. It’s believed to have originated in the 1950s and inspired similar popular styles in the region, such as reggae. The accented offbeats of ska give it its syncopated feel. And although this rhythm has been incorporated in faster sounding, cut-time music (like punk rock) in the latter era of ska, the original variety had a much slower and steadier pace.

Reggae is a style of music that emerged out of Jamaica around the 1960s. It’s closely linked to Rastafari culture, and, in addition to its characteristic lyrical themes and ‘skank’ guitar technique, its rhythmic elements are unmistakably unique.

A widespread practice in reggae drumming is the one drop, which replaces the downbeat with a rest, giving the drum pattern a unique quality that almost makes it feel like it’s floating on air. Here’s a simple reggae drum beat , with a short lead-in fill to make it easy to sense the one drop.

The soca beat is similar to the disco beat in its hi-hat syncopation but often features a more intricate bass-snare pattern that makes it busy but still very loopable.

Soca music first started to develop around the 1970s in Trinidad and Tobago and has since become a staple of that country’s music scene. It’s heavily influenced by calypso music (the name ‘soca’ is believed to be a portmanteau of ‘soul’ and ‘calypso’). The beat is interchangeably played with electronic and acoustic drums, typically at a fast but dance-worthy tempo.

Latin America (especially Cuba and Brazil) has contributed many challenging yet prominent rhythmic concepts to popular music. One of those concepts is the clave, which basically describes how beats are organized over time. A key characteristic of music that employs clave in its rhythm is a feeling of tension and release, which (by many musicologist’s accounts) has to do with the juxtaposition of quarter notes and triplets. There are several variations of this idea and corresponding musical subcategories that rely heavily on it. For example, here’s a bossa nova rhythm with a 3-2 clave .

A frequent drum pattern in many 80s new wave and post-punk songs was likely inspired by the song “Love Will Tear Us Apart” by Joy Division. It features a pretty straightforward rock beat but with a speedy and repetitive 16th note pattern played on a mostly closed hi-hat. Beyond new wave music, this beat has also popped up in other ‘-wave’ categories (particularly in more electronic styles, like synth wave) over the years. It also had a pretty significant influence on later rock and pop music, with bands like Interpol and Foo Fighters using variations in some of their most popular songs.

Although much of punk and metal might seem like simple rock music but faster, louder, and more distorted, specific characteristics give these styles their own distinctive rhythmic quality. The d-beat and blast beat are two basic drum patterns that emerged from hardcore punk’s race with metal during the 80s to become the fastest-sounding music in existence. This ultimately resulted in the rise of grindcore, a style that uses both beats (but especially the blast) almost exclusively. There are plenty of variations of each beat currently in existence, but here’s a basic example of a d-beat followed by a blast beat .

The Motown beat comes from a style of r&b music that originated in Detroit (aka Motown, hence the name). This particular groove can be heard in many classic songs by artists like The Supremes and The Temptations. The Motown beat’s influence on rock (and even metal) music is very understated. The almost train-sounding snare/cymbal combination accenting the downbeats (with syncopated bass notes) makes it seem a bit like the inversion of a cut-time rock, polka, or country beat.

Regardless of whether the name rings a bell, the final beat on this list is instantly recognizable upon hearing (especially to anybody who’s ever listened to 80s rap or drum and bass). This is because its original recording has been sampled countless times by numerous artists across several different musical styles. The sample comes from a late 60s track called “Amen, Brother” by The Winstons, which included a busy four-bar drum break a little over halfway through the song that, albeit brief, has proven to have had a lasting influence on both live and sample-based music. The pattern includes a regular rock beat interrupted by syncopated notes between the cymbal and snare drum (the latter of which were ghost notes in the original but became more fully articulated in many subsequent variations).

Aside from using the beat names listed above, another way to find the kind of beat you’re looking for is to use the ‘type beat’ search query method. This common practice includes searching online for “x type beat” (replacing “x” with whichever artist, song, or style you seek to emulate). The poet TS Eliot once said that “immature poets imitate; mature poets steal; bad poets deface what they take, and good poets make it into something better, or at least something different.” The same can be said about music producers. So the bottom line is, when you produce your drum beat, try to make it new and make it your own.