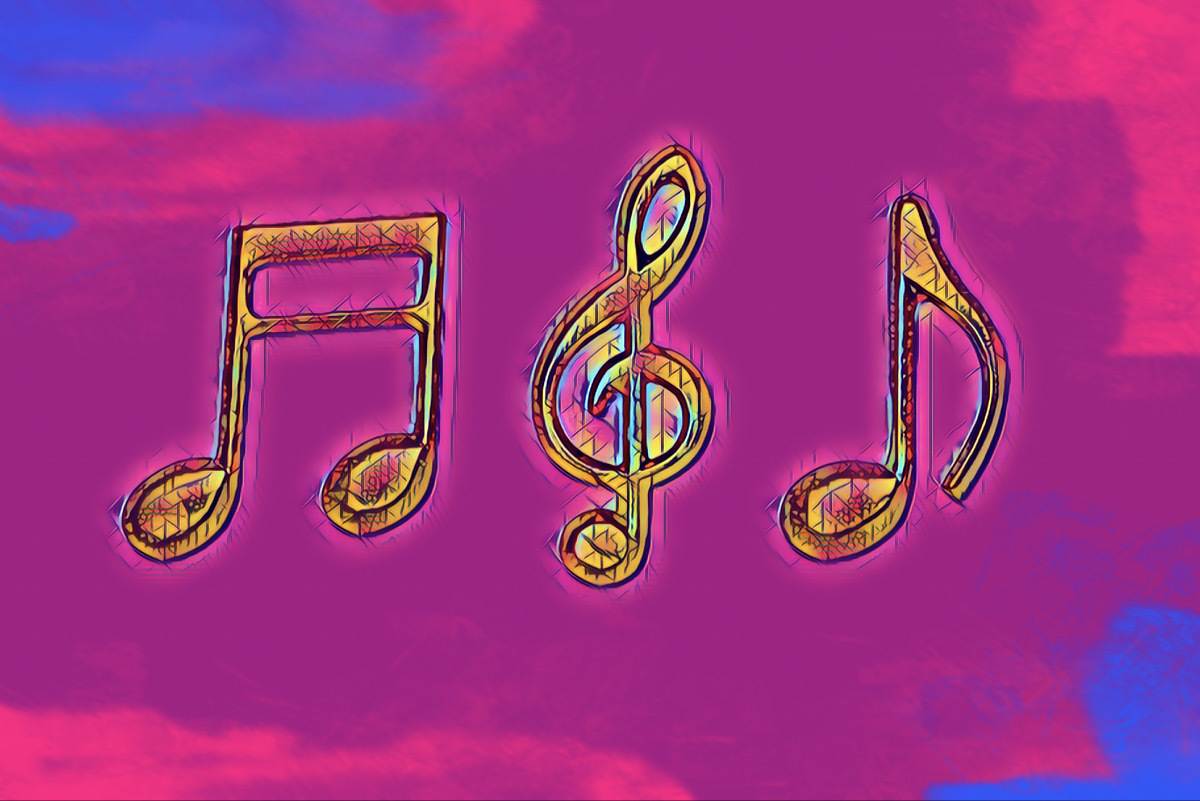 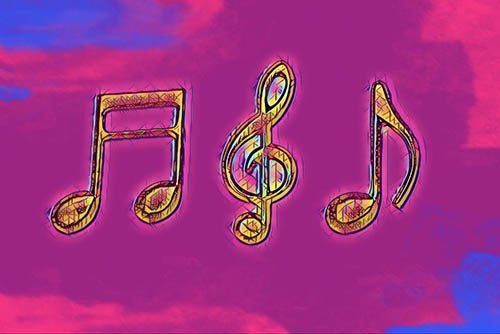 The tritone offers a unique opportunity for songwriters. While possibly not as attractive as other more “consonant” intervals like major or minor thirds, perfect fourths, fifths, or major sixths, the tritone (aka augmented fourth or diminished fifth) is ubiquitous in popular music and classical music.

There are numerous examples of tritones in music, television, and movie themes. For example, the theme from South Park is littered with tritones in the guitar riff. The main theme from the Simpsons prominently features a tritone. The famous prog-rock band Rush also uses the tritone in their hit “ YYZ .”

You rarely hear a tritone stand alone in contemporary pop, but it is immediately recognizable when you do. More frequently, you find tritones hidden inside a chord progression. Every dominant seventh chord (C7 or F7, for example) contains a tritone interval between the 3rd and ♭7th degrees of the chord. The blues scale includes a tritone interval, and there are many examples of major chords with tritones as well. The tritone is a multi-purpose interval, with many more dimensions than its devilish reputation might suggest.

What Is A Tritone?

A tritone is an interval equal to six half-steps. Remember that an interval is the distance between any two notes. We measure intervals in half-steps (or semitones). To get up to speed on reading sheet music you might want to check out this article we wrote on the topic.

Inside of every major scale, there is one naturally occurring tritone between the 4th and 7th degrees of the scale:

The tritone is also the even division of the octave. Remember, there are 12 notes in equal temperament and 12 notes inside of one octave. Furthermore, the interval of 6 semitones evenly divides the octave into two pieces. Crazy, right?

You can verify this for yourself on the circle of fifths. Take our previous examples, C to F♯, E to B♭, G to D♭, and B to F, and locate their positions on the circle. You will find they are exactly opposite one another.

If you just play these two tones together, you might find the sound unpleasant and somewhat unstable. You might feel like the tones want to pull to a more complete resolution point. This insight gives us a clue about its uses and why it's known as the devil's interval.

How Do You Identify A Tritone?

The tritone is a very dissonant sounding interval, which makes it fairly easy to identify. In the key of C Major, a great example of a tritone would be the interval between the notes B and F. These two notes are six half-steps apart. By playing these two notes together, you can identify the sound of a tritone.

Why is it Called The Devil's Tritone?

Despite its benign nature, the tritone has a dubious history in Western music. If we travel back in time to the Middle Ages, we will find that the Church primarily controls the music in Europe. Most people’s lives revolved around their religious faith. The Catholic Church made a serious effort to spread itself throughout Europe via a unified form of music, known today as Gregorian chant after Pope Gregory. One result of this effort was that most people experienced music primarily at Church, and the Church employed many musicians to compose music for services and other events.

This near-exclusive power over creative expression meant the Church could dictate taste almost completely. It is hard to know for certain, but we know that the first explicit disapproval of the tritone came from Italian music theorist Guido of Arezzo. At the time, Guido had devised a popular system of organizing chords, which was also a new invention in classical music.

Guido replaced the note B♮ (B natural) with B♭ to avoid the tritone naturally occurring in the C major scale between F and B. Was this distaste for the tritone a reflection on the larger attitudes regarding the fine arts in 17th century Europe? Most likely. However, the tritone’s devilish reputation extended into the 18th century when given the unfortunate title diabolus in musica or the devil in music.

Who knows to what extent the Church banned composers from using this interval. According to Musicologist Anthony Pryer , the tritone “…was recognized to be a problem in music right back to the 9th Century [and] a natural consequence, and so they banned it [and] had rules for getting around it. I don’t think they ever thought of it as the Devil dwelling in music.”

Why is The Tritone Considered Evil?

In the typical tale behind the tritone, many people believed that this interval had such an unpleasant sound that people of the Middle Ages considered the tritone the "devil's work."

As we discovered earlier, we rarely hear the tritone as a standalone interval. However, as with everything in music theory, there are many examples to the contrary. One such example of the devil's tritone is in the classic Black Sabbath tune, “ Black Sabbath .”

One might listen to this and think that it is precisely what the Church was trying to ban all those centuries ago!

The tritone also exists in the blues scale. The blues scale is a minor pentatonic scale with a flat five scale degree added. Check it out notated below:

There are many other chords besides the dominant 7th chord that contain tritones. Here are a few examples.

Check out some examples below of major 7th ♯11 chords and see if you can work any of these into your next tune! You will find they don’t sound very devilish at all.

A darker, more romantic chord, the minor 7th ♭5 chord contains a tritone between the root and the ♭5 scale degree. The formula for a minor 7th ♭5 chord is 1 – ♭3 – ♭5 – ♭7, and the chord is naturally occurring from the 7th degree of the major scale. In the key of C major, this means the corresponding chord is B minor 7th ♭5. We spell this chord B – D – F – A. It looks like this on the staff:

You can go way deep with these chords and find many ways to use and substitute them for dominant 7th chords. Mess around and use your imagination to find new and interesting sounds because no one is in control of your creativity but you!

Is a Tritone the Same As An Augmented 4th?

How Do You Use a Tritone?

One of the most common ways to use a tritone is in the place of a dominant (V7) chord. We call this a tritone substitution. For example, you could take the chord progression C-Dm7-G7-C and turn it into C-Dm7-Db7 (tritone)-C because the G7 and Db7 share the two notes B and F.

How Do You Resolve a Tritone?

There are two main ways in which you can resolve a tritone:

What Is The Ratio of a Tritone?

Euler's tritone, otherwise known as the greater septimal tritone, has an interval of 10:7 or 617.49 cents.  The 7:5 interval, which is the augmented fourth, is equal to the sum of a 6:5 minor third and a 7:6 subminor third.

What Is A Tritone Away From C?

A tritone away from C is F# . When these two notes are played together, you will hear the dissonance of the tritone.

Is Tritone a Chord?

Why is The Tritone Dissonant?

The Devil's tritone sounds very dissonant because of a uniquely subliminal and natural force. The harmonic series that we've created in western music excludes the tritone as an interval that requires resolution. A regular fourth or fifth can sit on their own and create pleasant harmonic content that we are used to hearing resolved. The tritone creates a desire for tonic resolution.

What Are Some Of the Most Prominent Examples of Tritones in Music?

You often hear the devil's interval in rock music, as well as music by heavy metal bands like Black Sabbath, Metallica, and more. However, tritone intervals can be found throughout the world of music when studied closely. Here are some of the best examples.

The very first interval in The Simpsons theme song is a tritone. However, you can also hear the tritone present throughout other parts of the track, such as the bass line at 0:15 and the trombones at 0:42. In music school, this reference is often used for students to remember the sound of the tritone.

The devil's tritone can be found in this Jimi Hendrix's psych-rock classic, "Purple Haze." The very first notes, which are played with the electric guitar and the bass, are octave-shifting tritones.

For musical theater buffs out there, "Maria" from West Side Story is a prime example of a tritone. You can hear it in the pickup of the song, though it ends up sticking around as the main motif throughout. The ascending tritone comes around when the singer first sings, "Maria, Maria, I first met a girl called Maria."

Despite its devilish history, the tritone is a wonderful and intriguing interval with many uses. The tritone is equal to six half steps and splits the octave perfectly in half, which you can discover by studying the circle of fifths. Many chords and scales include a tritone, such as dominant 7th chords and the blues scale, and many riffs and melodies incorporate a tritone somehow. Check it out, learn its mysteries, and find new ways to create with it!