A Guide To Shoegaze Production 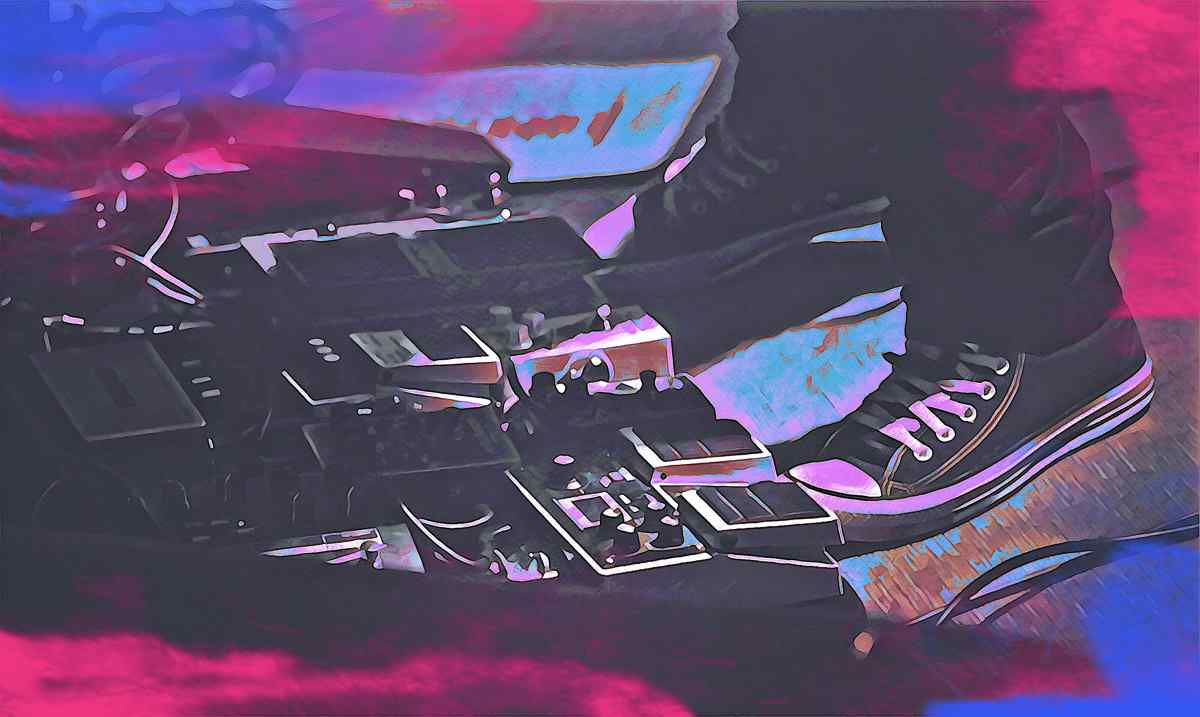 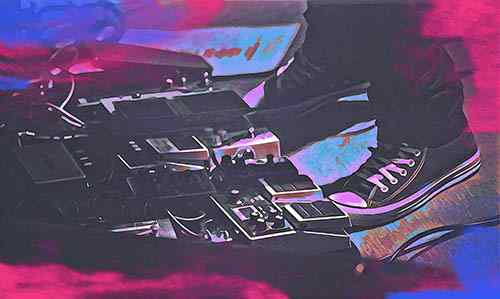 What gives shoegaze music its characteristic dreamlike sound? It’s due almost as much to its production as it is to its instrumentation and songwriting . But music production has changed significantly since the first shoegaze artists emerged (in the 1980s, by most accounts).

Suppose you’re a producer or engineer who works or would like to work with modern shoegaze bands. In that case, it will be helpful to learn a little about the history behind the genre’s recording and production conventions, along with the methods of the present and future.

Or suppose you’re a budding self-produced shoegazer or a seasoned pedal junkie looking to modernize your workflow. In that case, you should find this guide helpful regardless of how familiar you already are with shoegaze history.

Let’s start with a bit of background first; then, we can go into technical details.

Shoegaze Origins: Getting Your Feet Wet

The etymology of the term “shoegaze” lacks consensus, but it most likely has a lot to do with pedals . If it isn’t evident at first listen, shoegaze guitar tends to play through many different effects (often an entire pedalboard), causing shoegaze guitarists to look down a lot. But the term also alludes to shoegaze fans’ tendency to stare at the ground while listening to this often introspective and contemplative music.

Other instruments include the typical rock setup (drums, bass, vocals, etc.) with the occasional addition of synthesizer, strings, and anything else that can push sonic boundaries while not drowning out the rich harmonies and melodies essential to this dynamic yet distinctive musical style.

The music’s influence spans far and wide, with more and more bands identifying with the shoegaze moniker (or as shoegaze-adjacent) with each passing scene wave or era. And while it has deep roots in subgenres of rock like surf and psychedelia, two predominant shoegaze bands are almost universally regarded as pioneers of the genre: My Bloody Valentine and Slowdive.

Kevin Shields founded My Bloody Valentine in 1983 and has since cemented himself among the most influential figures in modern rock music. MBV’s current lineup includes members from Ireland and England. However, their origins are primarily associated with Dublin’s early post-punk scene. While their first album (1988’s Isn’t Anything) established them as shoegaze forerunners, their widely-acclaimed 1991 follow-up Loveless defined the sound for years to come.

My Bloody Valentine’s sound includes an immersive, dreamlike atmosphere and, notably, a great deal of amplitude. The band’s performances have been so loud that several members have sustained hearing damage, a level of which is likely only comparable to their contemporaries in the heavy metal space (which incidentally has overlapped with shoegaze music on occasion in recent years).

In 1989 (right around when their MBV predecessors were starting to gain traction), British guitarist-vocalists and childhood friends Rachel Goswell and Neil Halstead formed the band Slowdive. Like My Bloody Valentine (and others in the shoegaze realm), their music features both male and female vocals among fuzzy guitar tones and a dreamy atmosphere.

Other notable shoegaze artists include bands like Ride, Liars, Bedhead, and Mazzy Star. Prominent bands that incorporate shoegaze elements into their music (and have likely influenced it to some extent) include Sonic Youth and Dinosaur Jr., among many other artists in the indie and noise rock scenes.

And musical styles like dream pop, slowcore, and blackgaze are often (if not always) closely linked with shoegaze.

Like much of post-punk music, digital technology has helped shoegaze grow rather substantially from its comparably humble beginnings. Aside from the natural boost the music received from digital distribution platforms in the commercial and file-sharing spaces, digital music technology is beneficial to shoegaze artists, given the style’s heavy emphasis on effects and overall atmosphere.

Pedals often seen in the average shoegaze guitarist’s eye line have featured effects like chorus, distortion, fuzz, reverb, reverse reverb, phaser, flange, tremolo, and delay. The whammy bar has also played a key role in shoegaze guitar (notably in the work of Kevin Shields). The tremolo/vibrato systems in the Fender Jaguar and Jazzmaster have helped achieve that signature loud and warbly MBV sound.

While much of shoegaze music has considerably sophisticated production quality, there’s also been a crossover between shoegaze and lo-fi music . Small multitrack decks and other consumer-level equipment could replace fancy studios and huge recording budgets in the nineties. But nowadays, the lo-fi sound is more of an aesthetic preference than an economic imperative.

Analog recording has always treated the smooth, fluid, and often very legato sound inherent to most shoegaze music quite well. However, digital recording and mixing techniques have made shoegaze music production more accessible and better equipped for high dynamic range and diverse instrumentation.

When it comes to recording, everything depends on your resources and the physical space available. When treating your recording space, keep in mind that as shoegaze often uses very liberal amounts of reverb, solid and reflective surfaces (possibly at odd angles) can help produce some of that effect organically (for better or worse).

Since shoegaze music emphasizes sustain/release and not so much attack, distant miking can help add some ambiance (especially in larger rooms). There are digital tools to help achieve this effect artificially. But a ‘fix it in post’ mentality is rarely a good strategy. So the best way to ensure a struggle-free mixing process is to record the best possible source.

With drum set miking, there are several different patterns worth considering. Spaced-pair and ORTF can make the drums sound big and wide, which is excellent for shoegaze. More narrow-sounding patterns (like X-Y) may also work if you want the drums to sound more focused or centered (this often works well with slower-paced drumming).

If you’re new to recording and mixing drums, then you may want to experiment with both wide and narrow audio configurations. Mid/side drum miking is a reasonably simple way to compare wide vs. narrow stereo imaging on the fly. The setup includes two drum microphones, a cardioid (unidirectional) and figure 8 (bidirectional), pointed directly at one another. Further, the figure 8 mic’s null is pointed right down the center of the cardioid’s pickup pattern).

The more gain you add on the cardioid, the more narrow the sound image in the mix. By contrast, increased gain on the figure 8 mic will, in turn, widen the sound image since it’s picking up areas surrounding the drums and not the drum set directly. You probably don’t want extremely wide or extremely narrow, so try boosting/cutting gain on each until you find a good balance. Just keep in mind that the quality of the wider gains (from the bidirectional mic) will, to a large extent, depend on the room’s acoustic treatment.

Software And Plug-Ins For Shoegaze Music

Finding the right plug-ins will require some searching, and different DAW programs have their own plug-in compatibility. But there are free plug-ins available for effects like tremolo, reverb, delay, fuzz, and a lot more. On the commercial side, plug-in pricing can range from under fifty bucks to hundreds or even thousands of dollars (in the US).

Reverb , for example, is one of the most common effects in shoegaze music. In the higher price range, there’s Altiverb. Altiverb is a convolution reverb plug-in famous for its capacity to simulate different rooms or environments and sound incredibly natural. It’s an industry-standard plug-in, and it costs an industry-standard price (you’ll have to check the current pricing, but it typically runs somewhere between five hundred and a thousand USD at the moment).

Toward the lower end of the price spectrum, you have FabFilter Pro-R, an algorithmic reverb plug-in with an attractive and intuitive user interface. While not the cheapest, it’s one of the more modestly priced reverb plug-ins at a little under two hundred US dollars (you’ll have to look at current pricing for yourself, but that’s around what it is at the time of this writing). It has a lot of functions and is helpful in writing or demo recording and even professional production.

You’ll need to be aware of several different plug-in formats to make sure your plug-ins are compatible with your audio software and hardware. A few of the most common include Virtual Studio Technology (VST), Avid Audio Extension (AAX), and Audio Units (AU). VST is a versatile format compatible with many audio programs and includes both free and commercial plug-ins. AAX is Avid’s proprietary standard, so it should work on most if not all Avid systems (like Pro Tools). AU is for Apple software and is like the iOS version of VST.

During the mixing process, pay special attention to EQ as the sheer volume and variety of frequencies can easily cause muddiness. Use high/low pass filters and carve out those lower midrange (200-500 Hz tends to be the most vulnerable) muddy areas whenever necessary.

A relatively consistent characteristic of shoegaze music related to the recording, mix, and even performance is the subdued vocals. While many other musical styles prop up the vocals prominently in the mix, shoegaze often features vocals that sound far away (like something out of a David Lynch movie or a dream). This method isn’t the only way to mix shoegaze vocals but is quite common (and somewhat unique) to the style.

After the final mixdown, be sure to master your shoegaze music properly so that all of the careful work that you did mixing that vast range of frequencies doesn’t go entirely to waste. In the past, this often required a seasoned professional charging professional rates. But now, there’s automated mastering online with eMastered that will get you the quality you need for less than the cost of a new pair of shoes.